Though we have very quickly taken the habit of protesting against price rises regarding gas, this fuel is the most recent among fossil fuels: only in 1960 did gas use become more important than wood use in the world, when it was 1942 for oil and… 1860 for coal. And for a long time gas was an “american” energy: in 1965, more than 60% of the world consumption was done in the US ! 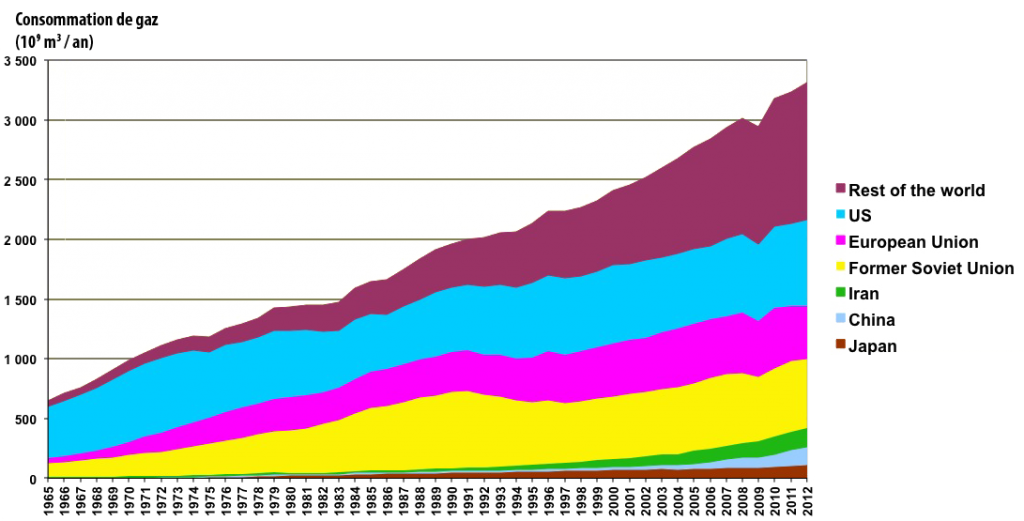 Gas consumption per country or zone since 1965, in billion cubic metres per year.

The US used to dominate the world consumption 50 years ago, but it is not the case any more. 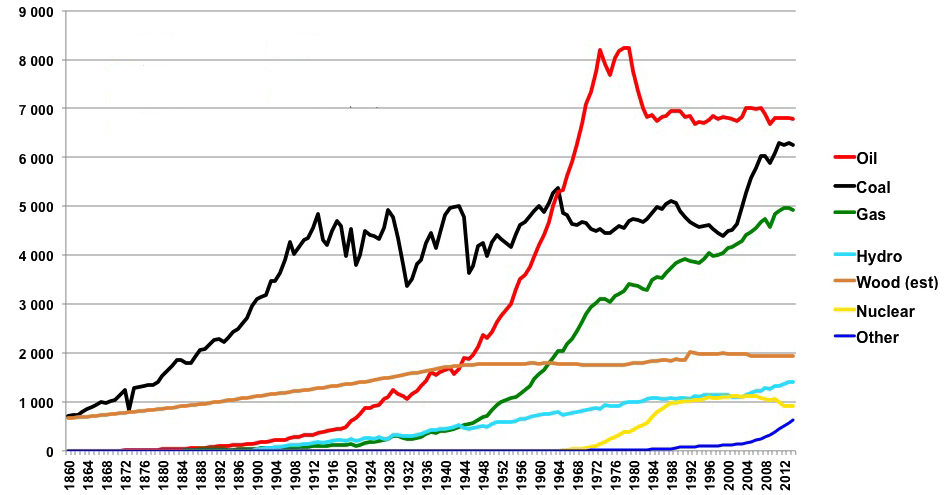 World average consumption per capita of each significant energy from 1860 onwards, in kWh par year.

One can wonder why gas did not rise at the same moment and at the same rate than oil, since oil fields are very often combined oil and gas fields (and particularly the ones closest to the surface, that have been discovered and exploited first). But contrary to oil, which is liquid and therefore easy to transport over long distances and to store, gas has the bad idea of being… gasesous.

As such, it is much less convenient to transport than oil (the point here is not dangerosity, but really the practical aspect), which translates into the economy through a high capital requirement per energy unit transported. It also explains why 60% of the world oil production is traded internationally, while it is only 30% for gas, and 15% to 20% for coal.

This dificulty to store and transport gas, and the fact that it can seldom be used right on the production site had a simple consequence: until the second half of the 20th century, the gas associated to an oil field was either set free in the atmosphere, or used to enhance oil recovery through re-injection in the field. When the climate scientists discovered that methane was a potent greenhouse gas, oil companies were encouraged to burn all the gas they were not re-injecting into the field (combustion then transforms each molecule of methane into a molecule of CO2, which divides the “nocivity” of emissions by 25), in a flaring unit. All that is mentionned above explains why, when oil companies discovered dry gas fields (fields with only gas and no oil), they considered it as a catastropha, and not at all as good news ! And it is still true when gas is discovered in small quantities far from any existing gas pipe.

And now ? Now gas is used for a number of things : 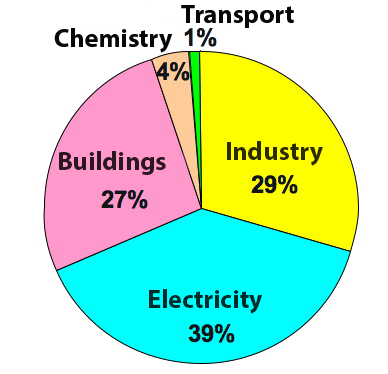 Breakdown by usage of gas consumption in the world in 2007.

This pie chart does not account for the fraction of the production which is flared (roughly 4%), and the fraction re-injected to enhance oil recovery in fields that have both gas and oil (roughly 13%).

As an important fraction of gas is used for heating buildings in the Northern hemisphere, there is a higher seasonnality for gas consumption than for oil consumption (for which the peak happens during the summer holiday season).

Breakdown of the gas consumption per month.

The highest seasonnality is for residential use (only hot water and cooking remain in summer), then the second highest is for commercial buildings. Besides part of the electricity production is for peak load, which – by definition – is not constant all year round !

But wells do produce at the same rate all year long, more or less. It means that part of the gas produced must be stored a couple months before being used. Using gas therefore requires storage infrastructure in the consuming country, which is more complex to build and operate than for oil (storing oil requires nothing more than big tanks: no big deal).

Why is gas so appealing now ?

The fast development of gas in heating, industry and power plants is based on a couple of “physical” advantages: 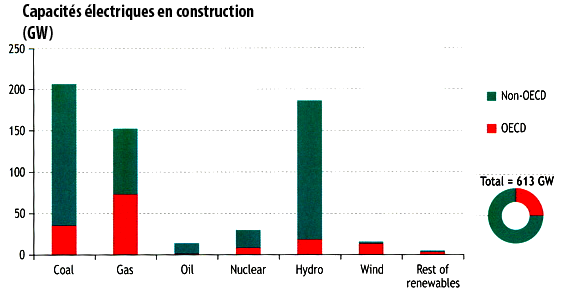 Breakdown by nature of primary energy of the power plants in construction in 2007 (in GW, not in number of plants).

Coal comes first in the world, but in Occidental countries (OECD) it is gas. And the first renewable is by far hydroelectricty (that, besides, has a higher load factor than wind).

In Germany, it’s gas and coal that would/will be used to replace most of the phased out nuclear (say two thirds, because the intermittence of wind prevents to go much higher, and it is also true for photovoltaïcs).

All is fine then?

Gas seems to be close to a perfect energy, then ! No local pollution, not too much money to put on the table for power plants, and besides it is… “natural” ! And if it is “natural”, it is good for us, isn’t it ? Of course, all things that are “natural” are not necessarily desirable: asteroids, tsunamis and malaria are perfectly natural… If we wtosk to facts, gas has two major inconvenients: 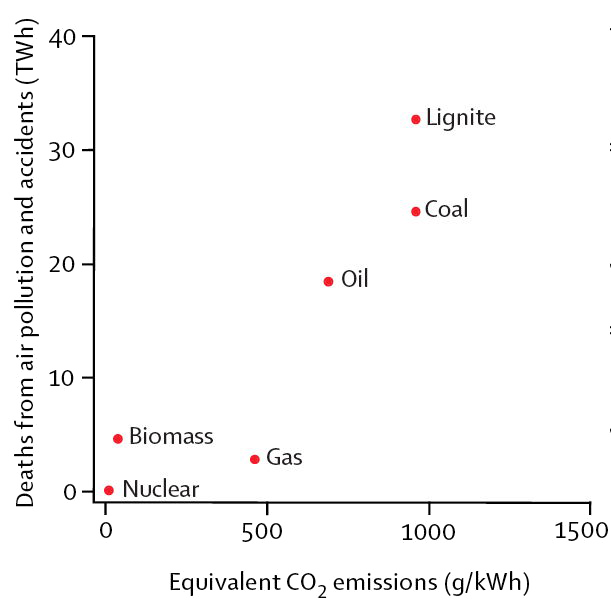 Number of deaths by electrical TWh (and CO2 emissions per electrical kWh) for power generation in Europe.

Future casualties linked to climate change are not taken into account. Professional diseases of coal miners in Europe are significantly less frequent than in non-OECD countries, where the death toll per TWh is higher.