Let’s recall also that the ozone we are interested into here is the stratospheric ozone, that is the “good” ozone, the one that we will find in the stratosphere, between and 30 km above our heads. The “ozone layer” isn’t 20 km thick, of course, and actually it is not a layer – it does not ressemble a layer of snow on the ground – but just a concentration in ozone in the air which is higher at these altitudes than elsewhere in the atmosphere (see figure below). 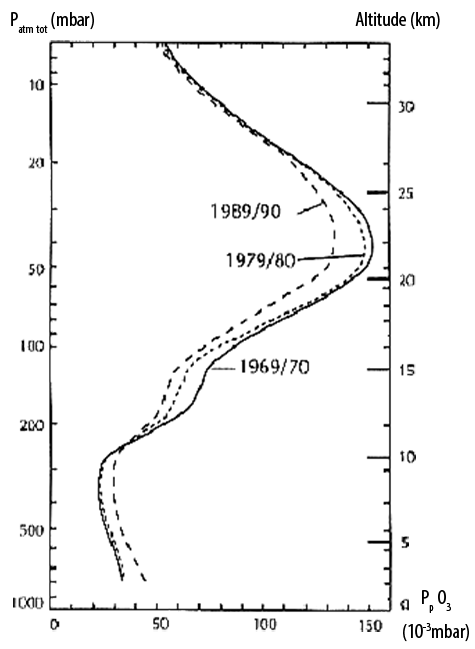 Partial pressure of ozone in thousandths of millibar (axe horizontal), plotted against altitude (vertical axis on the right).

The total atmospheric pressure is represented on the left vertical axis, in millibars. The three curves represent the ozone concentrations for three different years.

One easily sees that the concentration of ozone in the air never exceeds 0,5% : this value is a little low for a real layer !

One can also see that stratospheric ozone (the ozone in high altitudes) decreases with time, but that near the ground it is the opposite evolution that happens.

If we come back to the possible action of climate change on the depletion of stratospheric ozone, the chain of events works the following way:

The above graph represents the evolution of temperatures with time in the free atmosphere, depending on the latitude and the altitude, for the A1B scenario (roughly a doubling of the emissions between 2000 and 2100).

The horizontal axis represents Latitude (Equator in the middle, otherwise graduated in degrees of latitude) and the vertical axis the pressure, graduated in hectoPascals (pressure decreases with altitude). The stratosphere begins at 200 hectopascals and at 0 we are out of the atmosphere !
Red is hotter than today, and blue to violet cooler. It is easy to see that the stratosphere (higher than 200 hectopascals) will cool everywhere, and particularly over the poles (90N and 90S). 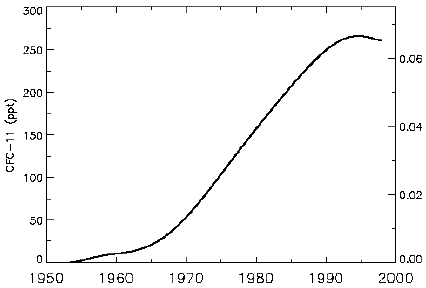 CFC 11 concentration in the troposphere (the troposphere is the lowest layer of the atmosphere, the one that is in contact with the ground and ends with the beginning of the stratosphere).

With a kind of “chain reaction”, we can see that climate change might cause an additionnal ozone depletion in the stratosphere. In the extreme case of total vanishing of the ozone layer – fortunately impossible for the visible future – all superior life on emerged land would probably vanish.