The future climate of the Earth will probably evolve in a way totally unprecedented since our species has begun its terrestrial existence. As it is thus impossible to infer from the sole observation of the past what can happen “later”, the only tools that the scientific community has in hands to try to know what will happen in the future are climate models.

A climate model is nothing more (some scientists might find that it’s not that bad already !) than a complex software which aims to reproduce as faithfully as possible the real climate system. It is therefore a large computer program, built the following way: 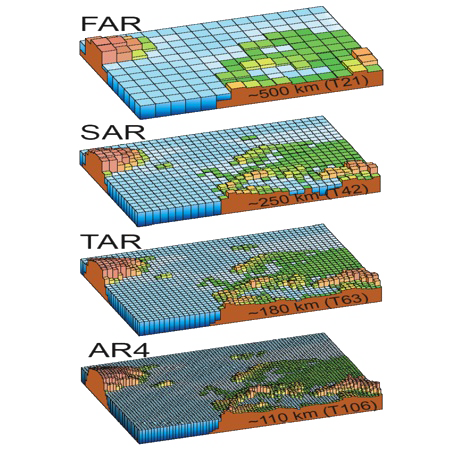 Evolution of the resolution (or of the size of the mesh, it’s all the same) of global climate models with time.

Before the IPCC First Assessment Report (noted FAR), that is in the 1980’s, the mesh was typically 500 km wide. Some regional models allowed meshes of 50 km or so in a particular region but then the meshes would strech to up to 1000 km for the rest of the world.

One of the advantages of computer models is that they can easily include an additional perturbation that evolves with time, for example the increase of greenhouse gas concentration in the atmosphere, to perform a virtual comparison of what happens “if”. “all there is to do” is to add an equation in the list.

Modelling is a discipline that did not start yesterday: it took its rise in the 60’s (the first atmospheric model was implemented on the first computer, the ENIAC). What enabled a soaring of the discipline is more the tremendous increase of the available processing power (and the availability of stallite data to confront model runs to observations) than breakthroughs in physics, what was pretty well known already a couple of decades ago.

For example, the time required to simulate one month of future climate has been divided by 100 between 1980 and today !

The more powerful the computers are, and the smaller the meshes can be. The shorter the prediction horizon is, and the smaller the meshes can also be, what increases the reliability of the predictions: meteorologists, that are not interested in the weather to be in a couple of centuries, but in the weather for tomorrow or after-tomorrow, work with models that are rather similar to those used by climatologists, but with meshes only a couple km wide.

It happens, at last, that a R letter can be found instead of G: we are then facing a regional climate model.

There are now about 15 different global circulation models around the world, designed and operated by as many teams of scientists (a major country has 2 to 3 teams/models), the whole representing about 2.000 individuals. But the total number of scientists, coming from various disciplines, that contribute to the construction or the feeding of a model is ten times superior at least: in order to know “what to put in the box”, it is necessary to use previously published work from many physicists, chemists, biologists, geologists, oceanographists, aerologists, glaciologists, demographs…

The laws of physics remain obviously the same everywhere and all the time, but these models are still rather different one from another, especially for the processes that are not explicitely taken into account, but are managed with parameters: some represent clouds this way, others that way, some take into account the biosphere feedbacks this way, others do not at all or represent them that way, etc

In France, a large deal of climate simulations are performed within the Institut Pierre Simon Laplace (IPSL), that rassembles:

All the models do not take exactely the same things into account, though they all have a common basis. Some will represent clouds in such a way, others in another, some will parametrize a given process (which means that it does not respond dynamically to what happens elsewhere in the model), others will not, etc. The major difference between models, however, comes from their year of conception. 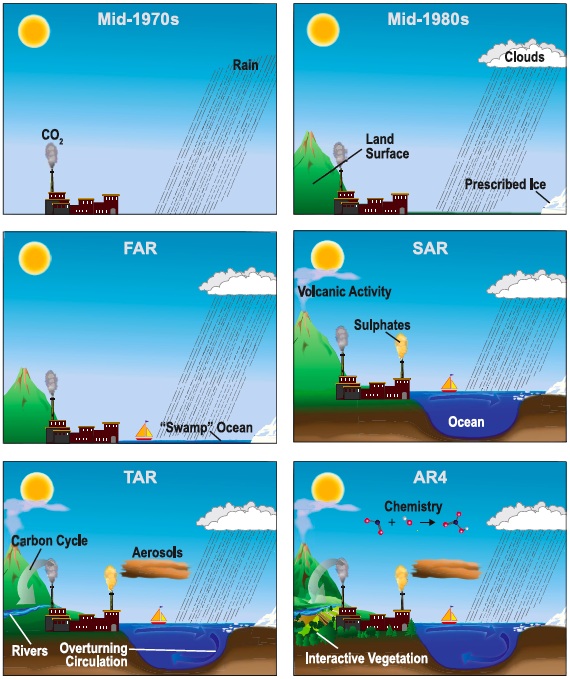 Evolution of the degree of sophistication of the global models since the 1970’s.

At first, models where purely atmospheric, representing the evolution of air temperatures and precipitations under the forcing of additional CO2 into the air. In the 1980’s came land occupation, clouds (parametrized), and sea iced (prescribed means not coupled to the rest). At the time of the IPCC First Assessment Report (FAR), ocean was there, but without any large scale circulation taken into account.

At last, some models used to write the 4th Assessment Report (AR4, 2007) include some atmospheric chemistry (that is processes that allow to represent the atmospheric increase – or decrease – of a coumpound A from the variation of the abundance of coumpounds B and/or C), and a dynamic vegetation, reacting in accordance to regional climate conditions.

What is remarkable is the fact that this major complexification of the tools used has not changed the major conclusions given in the 70’s: if our emissions lead to doubling of the CO2 in a century, it will modify the climate system, and in particular lead to a mean temperature increase of a couple °C.

As we have seen, there is not one but many greenhouse gases. These gases are not taken into account independantly one from another in the models: at first, a sum of all these gases is performed, each gas being weighted by its carbon equivalent, and it’s this “sum” that is used to represent the emissions and the concentrations af all greenhouse gases.

This is an important precision, because it prevents from studying easily the feedbacks of the beginning of a global warming on the “natural” emissions of each greenhouse gas taken one by one. It’s particularly the case for methane, for which the removal rate from the atmosphere is closely dependant on the concentration.

What are their weaknesses ?

The three main sources of incertitude in the climate models are the following:

But one should not deduct from the fact that some “haze” remain that all the results of simulations can be just throwed away ! Actually the comparisons available in the scientific litterature tend to confirm more and more that models are trustworthy.

An essentiel point is that, even if they are all slightly different one from another in their conception, and even if the quantitative results they yield are not rigorously identical, all the models come to the same conclusion: humankind modifies the climate system and globally increases the average near ground temperature. In addition these models also indicate that the humane influence will increase if the present trends go on for greenhouse gases emissions.

This figure represents the evolution of the average near ground temperature (which is often called the “average temperature of the earth”) for most of the world’s models (one curve per model) that have all been given the same hypothesis of a CO2 concentration increasing of 1% per year (which is roughly the present rate of increase).

The above figure represents the evolution of the annual precipitations for the whole world (one curve per model, as for the previous box) that have all been given the same hypothesis of a CO2 concentration increasing of 1% per year.

When a curve goes over the 0,05 value on the vertical axis, for example, it means that the precipitations on earth have increased, on average, of 0,05 mm per day, that is 18 mm per year, or 3,5% of the present average precipitations (520 mm of rain per year, on average for the whole planet).

But this surplus of rain will not be evenly dispatched: most models predict a great variability depending on the latitude (below). 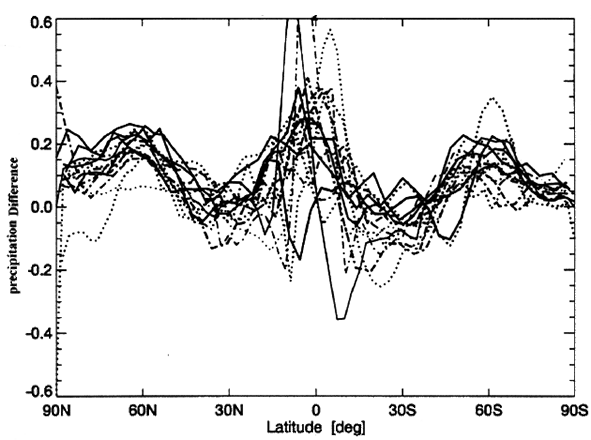 The above figure shows the “response” of the models (one curve per model, just as above) to a doubling of the atmospheric CO2 (in 60 to 80 years if we prolongate the trends) regarding the precipitations depending on the latitude. The vertical axis represents the difference between the average daily precipitation in the future and the present one (daily average for the whole planet), in mm of water.

It can be seen that, for example, around 60° North (Northern Scotland, Southern Norway, where rain is not scarce), it would rain even more (an additionnal 70 mm of rain per year), while around 30°N (California, Sahara, Mongolia, that is places not overwhelmed by rain today) it would rain the same or a little less, and around 30 °S (South Africa, Australia, Argentina) it would rain a little less. 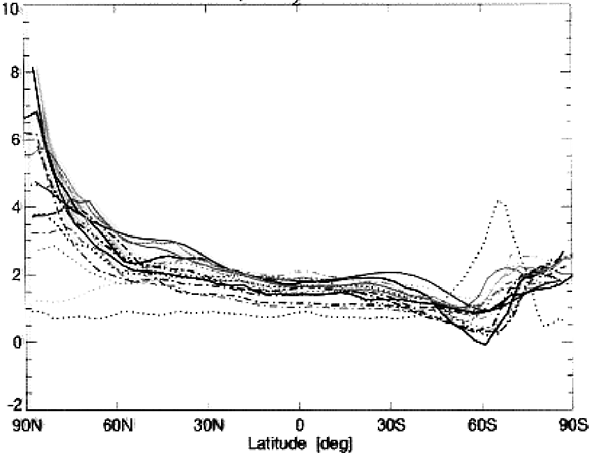 The above figure shows the average temperature rise depending on the latitude (one curve par model, just as above) when the atmospheric concentration of CO2 has doubled (in 60 to 80 years if we prolongate the trends)

We can see that sea ice close to the northern pole (90° N, on the extreme left) will be put under pressure: the temperature rise could reach 8° C in that region.

The characteristics mentionned above have the same origin: the greenhouse effect, which consists in trapping part of the infrared radiation of the Earth, does not vanish or greatly decrease at night or during the winter, as the heating of the sun does. Consequently, when the sun is not heating the surface (or is heating it much less, as in winter), the indirect heating of the ground coming from the greenhouse effect becomes an important or dominant term. Therefore the relative effect of the enhancement of this greenhouse effect is higher when there is no sun (winter and night). Another process comes into effect: when there is no sun, the air is cooler or colder, thus dryer, and the “natural” greenhouse effect coming from water vapour is lower. Therefore the consequence of an additionnal greenhouse effect coming from an increase of the CO2 concentration (which is well mixed and not dependant on temperature) is proportionnaly higher where/when the temperature is low. Both these processes explain part of the higher increase near the poles.

Want to know more ? Additional information can be found on this other page.

Predicting the future
Published on August 1, 2007