I would not have supposed it that frequent when I started to investigate our “climatic future”, but there is a very frequent confusion that is made between two important environment problems that happen “above our heads”: the enhancement of the greenhouse effect and the “hole in the ozone layer”. This confusion even happens for some high-ranking members of the government or known journalists (I’ve got names !).

These two phenomena have certainly characteristics in common, that explain this confusion. Here are – among others – some of them:

Differences between climate change and decreasing of the stratospheric ozone

But there are, of course, major differences between these two phenomena that are climate change and the “hole in the ozone layer”:

In order to complicate things a little bit more, there are two places where it’s possible to find ozone concentrations in the atmosphere:

Do we speak of the same ozone ? Yes: it is definitely the same chemical coumpound ! Only in the high atmosphere we don’t breathe it, because we don’t live there, and we just see its positive effect. In the lower atmosphere it does intercept ultraviolet too, but there we breathe it !

It is also essential to indicate that the ozone near the ground and the ozone “far up” don’t mingle together. They result from two distinct cycles, have two distinct ways of appering and disappearing, and do not communicate one with another: an ozone molecule formed in the lower atmosphere will never move to the higher atmosphere, and vice versa.

But while the stratospheric ozone decreases, the ozone near the ground increases everywhere !

Everybody knows, now, that stratospheric ozone is decreasing. But it is of common belief to think that the ozone near the ground increases only in cities in the summer. There is difinitively such an increase, but actually ozone near the ground has also increased everywhere and all the time. 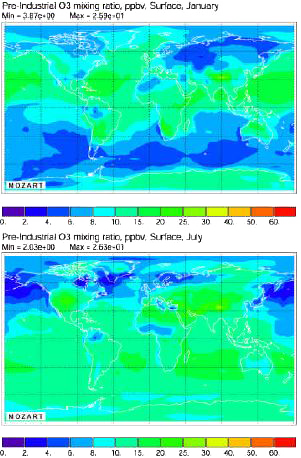 Average ozone concentration near the ground for the pre-industrial era (that is 1750), computed with the Mozart Model. Above, in january, below, in july. 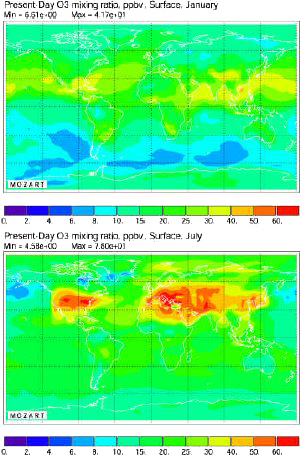 Same computation, but for present times (of course this calculation fits the data obtained from measurements where available).

The increase over the whole surface of the planet is striking: even over the middle of the Pacific Ocean has the ozone concentration increased.

Is this increase anyhow linked to climate change ? Yes, in two ways: 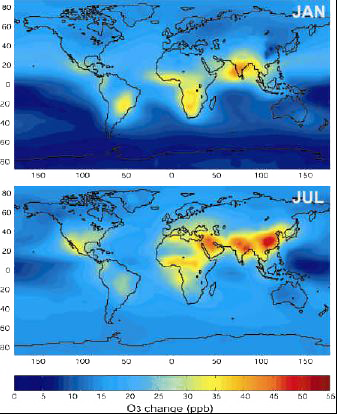 Possible increase of ozone near the ground, in ppbv, between 2000 and 2100, by combining the results of 10 different models.

The increase is particularly acute over China and India (a result of the projected increase of fossil fuel consumption in the scenario used), and over Africa (increase in forest fires).
For some regions, this increase will result in a doubling or a tripling of the present values. 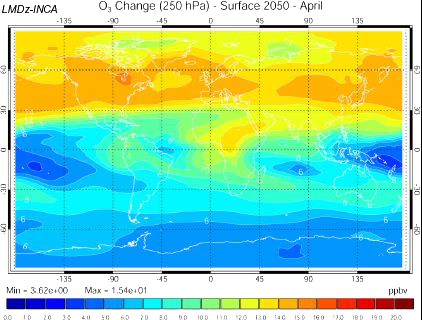 US are on the left of the map, Europe in the center, and Asia on the right. 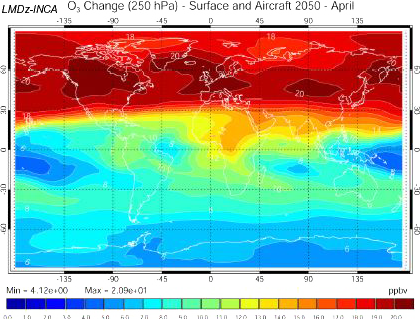 Same computation, but including the emissions from planes, that follow the Fa1 emission scenario of the IPCC 1999 special report on planes.

The gases involved in the “diminishing of the ozone layer”: the CFCs

The general formula of a molecule of CFC is therefore CxClyFz: it contains only carbon, chlorine, and fluorine.

CFCs are simultaneously potent greenhouse gases (they efficiently intercept infrared radiations emitted by the surface of the earth, and have a lifetime of several hundred years in the atmosphere), and precursors of some coumpounds that destroy the stratospheric ozone. It’s only the second effect that has justified the progressive ban of their production (and use, of course !).

Why were they used, then ? Of course, at the time of the rise of their production, their effect on stratospheric ozone was not known. Their success comes from the fact that they constitute very stable molecules (much more than hydrocarbons), which means that they have sanitary or security advantages for human beings. On the opposite, what we designate under the word “pollutant” is classically a very active chemical coumpound, susceptible to react with a great number of another coumpounds, and therefore to generate non wished effects among living being that inhalate it, or eat it, or touch it.

A coumpound that reacts with nothing, or almost nothing, if we ever breathe or eat some, chances are that we won’t even notice it. CFCs have therefore replaced, for various industrial applications, gases that had sanitary or security inconvenients, that is were potentially toxic or dangerous:

But it’s preciseley because these molecules are “solid” that they generated the environment problem known as the “hole in the ozone layer”: as they are not reacting with anything once in the atmosphere, they remain there long enough to have the time to spread to the stratosphere (what takes a long time because they are generally heavy molecules), where they are broken down by ultraviolets sent by the sun, thus freeing the chlorine they include, which then starts a complex set of chemical reactions leading to the destruction of high altitude ozone. 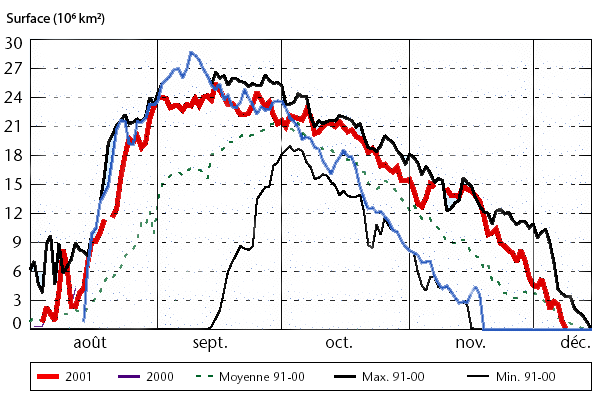 Day to day evolution of the surface of the “hole in the ozone layer” over the South Pole, in millions of km2, for various years since 1990. As a comparison basis, one can remember that Northern America’ superficy is worth 25 million km².

The “hole” is defined as the surface for which the ozone concentration is at most half of its usual value (for those who like details, the normal value of the ozone concentration is roughly 400 Dobson units, and the “hole” designates the region where the value is less than 220 Dobson units at most). And at last, for those who did not guess by themselves, “août” means august, and “moyenne” means average.

It is easy to see that the extension of the hole for the recent years (2000 in blue ; 2001 in red) is over the average for the years 91-00 and close to the maximum for that period. The problem is not behind us !