Eating would lead to greenhouse gases emissions ? You must be joking…… And though, eating is a heavyweight, in France (and probably in many other occidental countries), among the activities that disturb the climate system. We owe this to the fact that agriculture is the main source of the principal non CO2 greenhouse gases : methane and nitrous oxide.

Contribution of the various activities to methane (CH4) and nitrous oxide (N2O) emissions in France in 2004.
International bunkers are not taken into account.

CH4: Agriculture contributes for roughly 60% of the total.

N2O: Agriculture contributes for almost three fourths of the total.

On the other hand, these two gases (methane and nitrous oxide) account today for almost one third of the national total in France. 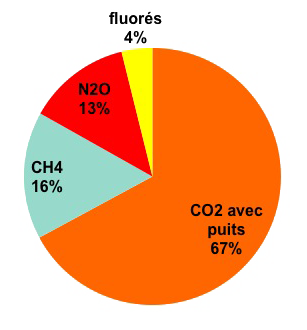 Breakdown by gas of the french greenhouse gases emissions for 2001, once sinks are taken into account.

Without much surprise, a conclusion of these two pieces of information is that agriculture ranks first in the french emissions. 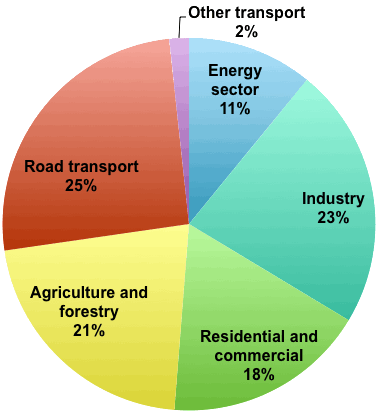 Breakdown by activity of the greenhouse gases emissions in France for 2001, all gases (except ozone) being taken into account. The sinks are not taken into account (I don’t know how to deduct them from the various activities !)

It is noticeable that the first source corresponds to agricultural activities, at the same level than industry or transportation.
NB : international air and sea transportation is not included

But if we want to be exhaustive, we must also take into account other processes that are necessary to feed the population, and therefore have a wider look than just concentrating on direct emissions from agriculture. Indeed :

Packaging, that is certainly not restricted to food products, represents a fourth of the emissions deriving from this “raw material production” : almost the same amount than what is emitted for construction materials ! 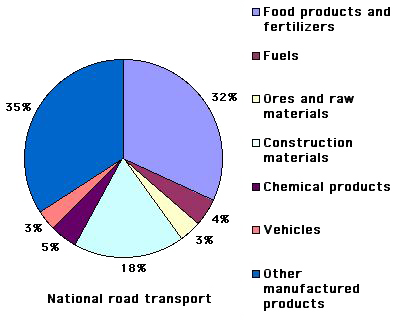 Breakdown by nature of goods of the road transportation in France in 2001 (it is the share among the tonnes.km).

As it can be seen on the above chart, a third of the trucks that get us so mad on the roads carry intermediate or consumer goods of the agricultural and food processing sectors. It can be living animals, fodder, milk, frozen foods, etc. Incidentally, it is obvious that every time we buy oranges coming from Spain or grapes coming from Italy, we French buy at the same time the road transportation that goes along with it, and we can hardly complain about later on ! The above chart does not include the share of food related products in the maritime and air transport, for which I do not have data.

How much greenhouse gases does all this make ?

If we now try to sum up all that is mentionned above, we get to the following table, certainly perfectible, but that gives a general idea of the various contributions :

The conclusion that we may draw from the above rough calculation is that if we take all the processes we call on to eat into account, we get closer to a third of the french emissions to fill up our stomachs ! Of course, a rigourous calculation should take into account exports (for which our national emissions actually occur to fill up somebody else’s stomach) and imports (which, with my calculation, allow us to eat as much as we want without increasing much the national total), but still we are probably not very far from the truth.

How much greenhouse gases in this or that ?

Summing up sectoral emissions is not the only exercise that we can do with greenhouse gases emissions induced by food production and delivery. Another calculation which is not without interest is to know “how much greenhouse gases” has been emitted to get this or that product, without bothering if the emissions happened at Pierre’s, Paul’s or John’s place.

For example, we might want to know how much greenhouse gases have been emitted to produce a kg of industrial chicken. We must then look at all that was necessary to get the beast, regardless of the country where it happened (such an approach is called a life cycle analysis) :

At last, if the food is obtained from a ruminant (which is not much the case of a chicken !), such as milk, beef meat, etc, we also must take into account the methane burped by these nice animals. Indeed, ruminants produce methane in their stomachs because of the fermentation of the plants they eat (I recall that a cow has 4 stomachs !), and in France the weight of the cattle is superior to the weight of the population (we have 20 million heads of cattle, weighing several hundred kilograms in average). This is also true for the world as a whole : there are 1,4 billion heads of cattle for 6 billion people, and on average a head weights more than a human being.

The results of an estimation “from the oilfield – or the gas field – to the stomach” (figures are valid ±50%) are presented below : 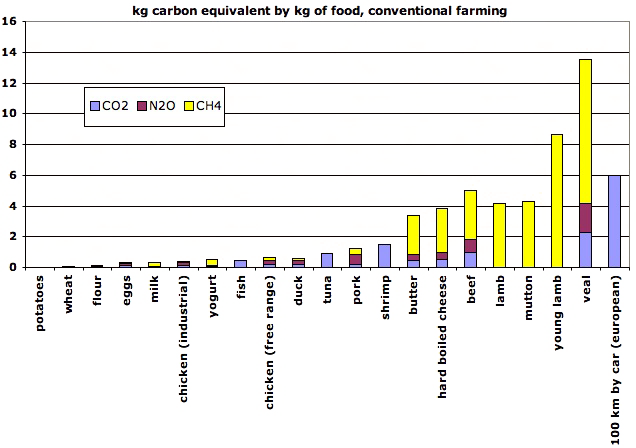 Greenhouse gases emissions linked to the production of a kg (roughly 2 pounds) of food.

Meat is with bones (the proper term would be “carcass equivalent”) but without processing, packaging, or transportation.

To allow a reference, the bar on the far right represents the emissions linked to driving 100 km in an average european car.

Is organic farming much better for climate change ?

What happens when we turn to organic farming ?

If we analyze all these opposite effects, here is the result : 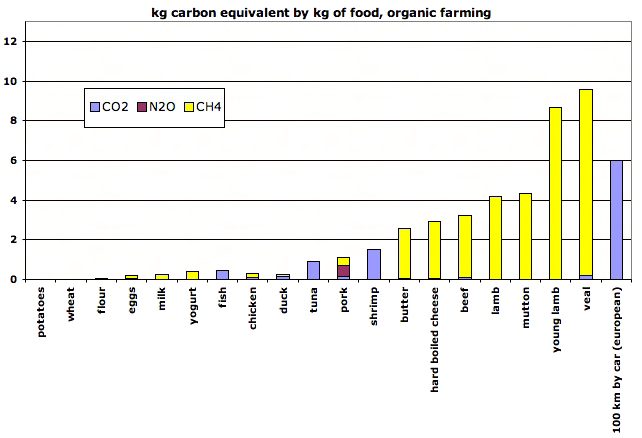 Greenhouse gases emissions linked to the production of a kg (roughly 2 pounds) of food with organic farming.

CO2 and N2O emissions decrease, and overall emissions by kg decrease by 30% on average, more for poultry and vegetables.

Eating organic is definitely a good thing, but to preserve the climate we must also eat less meat. Furthermore, eating as much meat as today prevents converting a large fraction of the agriculture to organic farming, because as organic farming has lower yields for cereal production (about half the output per hectare), going organic for 100% of agriculture while keeping the same animal production would need much more arable land than we have at present, and it will be a goal even harder to meet if in the same time we want to turn crops into biofuels !