NB : the text below is the english translation of the text that wes sent to the magazine. As always, the text published was slightly different (one is never able to review the final version).

The European Commission, not elected thus having an unknown representativity, has decided to “open” the electricity markets, in the name of a concurrence that the Swiss, invited to vote explicitely on the subject, just refused (A referendum was conducted in Switzerland offering to “liberalize” the electricity domestic market. The proposition was turned down).

The french executive power, truly representative of a minor fraction of the country (14% of registered electors voted Chirac at the first stage of the presidential election, and 20% voted UMP at the first stage of the election of congress), wants to “open” the stock of EDF (EDF stands for Electricité De France, a state held electricity company still holding the monopole of distribution for individual consumers, and that long had it for businesses) without the slightest start of an explanation on how it allowed to meet better the major long term challenges, and particularly two of them, that are impossible to state in purely economic terms : climate change and fossil fuel depletion.

A couple of figures will help to understand what is at stake in climate change. First one should know that the last ice age, during which France was covered by a meagre steppic vegetation, totally incapable of feeding a couple million souls, corresponds to a drop of just 5° C of the average earth temperature compared to today. An increase of the planetary temperature of a couple degrees Celsius in a century, what recent simulations promise if we prolongate our present consumption trends for a couple decades or more, probably means a true “climate shock” given what we know, and not just taking off a sweater in the winter. 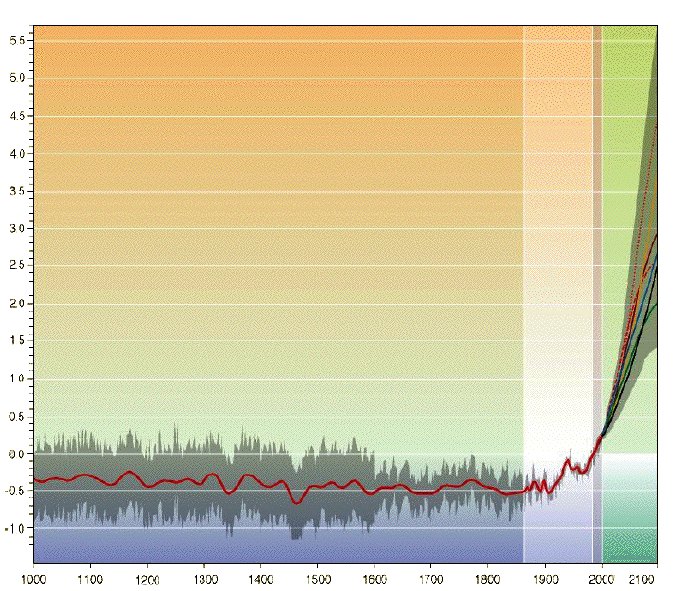 The red curve represents the average temperature of the northern hemisphere, from year 1000 to year 2000 (the shaded grey zone represents the error margin for anciens time), and possible increases for the 21st century, depending on the emission scenarios for greenhouse gases, and the models used (color curves starting from 2000, the enveloppe of all simulations being in brown).

We must then add that 65 % of the electricity produced in Europe comes today from power plants using coal, fuel oil, or natural gas as primary energies, that all lead to climate disrupting CO2 emissions when burnt. Well, achieving a stabilization of the CO2 level in the atmosphere requires to divide by 4 at least the carbon emissions of each European. And not, alas, to cut them by 5% only.

“Liberalizing” will lead to lower prices, and this is a good thing, we hear. But is it possible to have lower prices and not an increasing demand ? Is it possible to increase the demand and divide the european CO2 emissions by 4, when electricity generation already represents more than 25% of these emissions ?

Some might answer that “all we have to do” is to produce electricity out of renewables or nuclear. But there is no way renewables will ever produce a dominant fraction of the present electricity consumption, because of physical limitations.

And nuclear ? That’s where the problem of “liberalizing” hurts. Because for a given installed power gas turbines require an initial investment four times lower than what is required for nuclear, which offers, on the other hand, a longer useful life and a much lower fuel cost, so that a kWh is cheaper – on average – with nuclear than with natural gas. But what private company, closely scrutinized by financial markets (something that happens as soon as 2% of the stock has gone public), will want to invest four times more to preserve the climate system, when its future degradation is at no cost today ?

Is it possible to “liberalize” and “privatize” without taking climate change into account, and just hope that it will be possible to enact the proper regulations later on ? The laborious international negociations under way, that attempt to do so, do not incline to be optimistic.

If concurrence is such a supreme value, justifying any sacrifice, what are we waiting for to set up a second European Commission that would be a competitor of the existing one ?