When evoking the alternatives to the classical internal combustion engine that would enable to get rid of all its inconvenients, one thing which is sure to get in the conversation is the fuell cell. Without pretending to be a specialist, there are a couple of simple facts that might be recalled in order to get a more balanced opinion on the potential of this technology.

To start with, let’s first recall that the fuell cell was discovered more than a century ago : if ti were a miracle technology we would have known it since then ! If the internal combustion engine first met success, it’s because the fuell cell raises a couple of problems that are not obvious to solve.

But let’s start with the advantages. It is not debatable that a fuell cell emits very little local pollutants. There are several ways to emit pollutants when burning a fuel (this therefore applies to engines but also coal or gas power plants, for example) :

It happens that in a fuell cell there is no classical combustion, but a process called catalysis (which, in simple terms, is the opposite of electrolysis : an electrolysis consists in submitting a solution to an electric current to split coumpounds, when catalysis consists in putting specific compounds into a solution – sometimes into a solid – and their reaction creates an electric current). The temperature of most fuell cells is around a couple hundred ° C. Thus local pollutants, linked to high temperature atmospheric reactions are not emitted by a fuell cell.

Otherwise a fuell cell produces electricity, hence a fuell cell car is a particular case of electric car, with the advantage that an electric engine has a much better efficiency than a combustion engine. With 1 kWh of fuel (typically a little less than 10 cl of petrol) we will eventually get 0,3 to 0,4 kWh of mechanical energy with a combustion engine (the rest is heat and lost) when with 1 kWh of electricity it’s rather 0,8 to 0,9 kWh of mechanical energy that we will get out of the engine.

If fuell cells do not equip every car with these advantages, it’s that they have a major inconvenient : they all need hydrogen, a coumpound that does not exist under a native form on earth. In other terms, there is nowhere on our planet where we can go and find some hydrogen under an almost exploitable form, as it is it the case for fossil fuels. To obtain this precious hydrogen, there are several possibilities :

For cars, the only solution now considered for commercial diffusion in the near future is extraction from hydrocarbons, that can be performed etither directely in the vehicle, or in a plant, with storage and transportation afterwards. In both cases the process consists in heating intensely natural gas or another hydrocarbon (like methanol, CH3OH) without the presence of oxygen. The molecule then “breaks up”, the carbon is generally oxydizied in CO2 afterwards (and is freed in the air) while the hydrogen is kept then used.

As the energy used to produce the heat is generally a fossil fuel, and as the carbon freed leads to CO2 emissions, this way of producing hydrogen is not precisely “clean”. All the emissions linked to production, but also those that might arise from the energy used to store and/or transport hydrogen, result in the fact that the overall emissions, sometimes called “from well to wheel”, that take into acount all that happens between the first and the last processes that are necessary, are about the same for fuell cells than for a combustion engine (with the same power, of course !) with the “modern” technologies (Diesel ICE HEV, graph below). 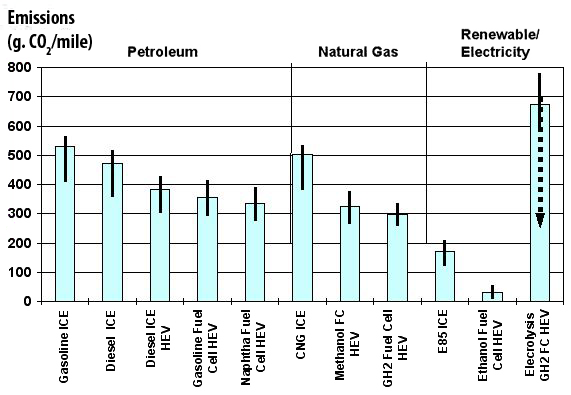 CO2 emissions per mile, “from well to wheel”.

We note that fuell cells and the best diesel technologies are about at the same level. An hybrid car with a diesel ICE HEV is not represented, but this technology is able to compare favourably with fuell cells regarding CO2 emissions per mile. Only if the primary energy used is renewable (or nuclear) is fuell cells a potentially interesting idea.

This does not mean that classical combustion engines are just fine (our present mobility may well not be sustainable for very long), but substituting to these engines fuell cells fed with hydrocarbons, “all things unchanged otherwise”, allows to win a big something on local pollution, but just a little something on the global energy efficiency, and that’s it.

We do not hold here a solution with the good magnitude to allow a division by 4 of the CO2 emissions of transportation means (and CO2 is a greenhouse gas, causing climate change). Indeed, the present number of cars is around 600 million, and prolongating the trends could lead to 2,5 billion vehicles in 2060 (this number “just” supposes a mere 2,5% annual increase of the number of cars in the world). Incidentally I doubt very much that we will get there one day : prolongating the trends leads to an “implosion” of our civilization much before.

Evolution of the number of cars in the world.

The square sizes represent the vehicules’number (in millions)

On the other hand changing the technolgy of the engine, “all things unchanged otherwise”, solves neither the problem of congestion, nor the problem of excessive fossil fuel consumption. Some conclusion on the electric cars remain partially valid here. If we use electricity to produce the hydrogen, given the efficiency of the process “from well to wheel”, and the very poor efficiency of hydrogen storage, we should more or less double the number of power plants.

The only way to have a really “clean” technology, as far as CO2 is concerned, is to have the fuell cell operating on hydrogen obtained without extracting it from hydrocarbons. The possibilities are the following :

In this context, apart from the fact that only nuclear energy has the potential for a massive production of hydrogen over a long period (and only if we use breeders), this gas poses a very difficult challenge for its storage and transportation : it is not liquefiable at ambiant temperatures, highly flammable (but much less explosive than what people currently think), and most of all very light, what ineluctably makes hydrogen transportation expensive, for basic physical reasons that are not about to disappear.

In particular, the laws of physics indicate that the energy required to compress a gas does not depend on the gas, but just on the starting and ending pressures. Compressing 1 m3 of methane from 1 to 200 bars (sometimes called “atmospheres”, it’s the same !) or compressing 1 m3 of hydrogen from 1 to 200 bars requires exactely the same amount of energy. As transporting a gas through a pipe is baiscally compressing it at regular intervals, we can keep the idea that the energy spending linked to transportation and storage of a gas are roughly proportional to the volume handled. But burning 1 m3 of methane or 1 m3 of hydrogen don’t yield the same amount of energy !

1 m³ of methane (natural gas) yields 10 kWh (36 MJ) when burning, when 1 m³ of hydrogen just gives 3 kWh (10 MJ). Because of this, the energy spending for transportation will be at least 3 times higher, proportionnally to the final energy available, for hydrogen than for methane (which already has a more defavourable balance than oil).

For energy production in buildings

The fuell cells now about to be commercialized (that basically use in a different way the non-renewable hydrocarbons) have a lower efficiency than cogeneration, this process allowing to have heat (if it can be of any use) and electricity for about the same energy spending than what is necessary for electricity alone. There are prototypes of fuell cells that could also offer cogeneration (because they would operate at very high temperatures, close to 1.000 °C), but the commercial feasibility is still not achieved.

This being said, just as for cars, fuel cells operating on hydrocarbons do not allow to solve directely the CO2 problem, and that even when cogeneration with fuell cells will be tuned. In order to hold a solution in fuel cells we should need to capture and sequestrate the CO2.

So fuel cells do not offer, for the time being, a solution with the good magnitude for the two main problems that are climate change and the ineluctable fossil fuel depletion (two processes that will significantly impact the begining century).

The intesresting use of fuel cells might be as a storage device to take advantage of electricity produced when we don’t need it (nuclear during off peak hours, solar…). When fed with electricity, the cell behaves as an electrolyzer, producing hydrogen that is stored in a tank (just like for gas). When we to use this stored hydrogen, the cell operates “normally” and consumes the stored hydrogen. This being said, the overall efficiency of such a storage system would be 25% at best : it won’t prevent us from energy savings !

Right now manufacturing a fuel cell requires rare metals, such as platinum, for which just one country (South Africa) provides 70% of the world production. This production totalled 5.860.000 ounces in 2001 (one ounce = 28,35 grams), or 160 tonnes. If we suppose that 30 grams of platinum are required to manufacture one fuel cell (for cars), which is about 3 times less than what current state of the art allows (right now 100 grams are required), the world production of platinum (half of which being already used for catalytic exhausts, that would not be necessary any more with fuel cells) would allow to manufacture 5 million cars per year. With the present state of the art it’s only 1,5 million cars per year that could be built.

Hence 120 years would be necessary (with 30 grams per cell) to transform the present 600 million cars, and 600 years if the total number of cars jumped to 3 billion, a number that would be reached if all the world had the same number of cars per number of inhabitants than France.