Holy electric car ! We can now witness the multiplication of speeches in which this marvellous device is going to solve the problem of mobility in a carbon-constrained world, as sure as 2 and 2 make 4. “Clean” car here, “green” car there, “car of the future” here again… any political leader that says (s)he cares about the environment has a special thought for this device. Well, are we sure that this car, gladly presented as the ideal solution for a green future, meets this promise ? The advantages we frequently hear regarding electric cars are:

Some of this is true… but not all, as usual.

Anyone who has driven an electric car has noticed that it is indeed less noisy than a petrol car, but:

At low speed, and for a moderate trafic, though, there is a real benefit regarding noise. But… it is then somestimes necessary to produce extra noise (with a bell, for example) because otherwise the pedestrians don’t pay attention and get ran over ! New trams in Paris are equipped with bells precisely for this reason, and it seems that it gets on the nerves of the people that live along tram lines… we live a complicated world.

No local pollution, then, is real where the car is used. But this car had to be manufactured ! And this process has generated plenty of local pollution “elsewhere”, just as for an regular car:

As a result, the CO2 emissions that arise from manufacturing an electric car are about the same of what they are for a regular car, that is 5,4 tonnes CO2equivalent per tonne of car (one of the things that are often misleading in comparisons is that electric cars are generally lighter and less powerful than gasoline cars). For a car that has a “life expectancy” of 200,000 km (roughly 120,000 miles), it means that each kilomterer generates (for the manufacturing process) 40 grammes of CO2. This is not totally clean !

There is a last item we’d better not forget when we discuss the benefits of electric cars: electricity has to be generated. Indeed, as there is no “natural electricity tank” where this precious fluid would be available at no cost and without pollution, we have to produce it. And thus electricity is as clean as the way to produce it, which is now done:

As a result, electricity production releases more CO2 into the atmosphere than all terrestrial, airborne and marine transportation device, with coal fired power plants alone representing a fith of the world total. 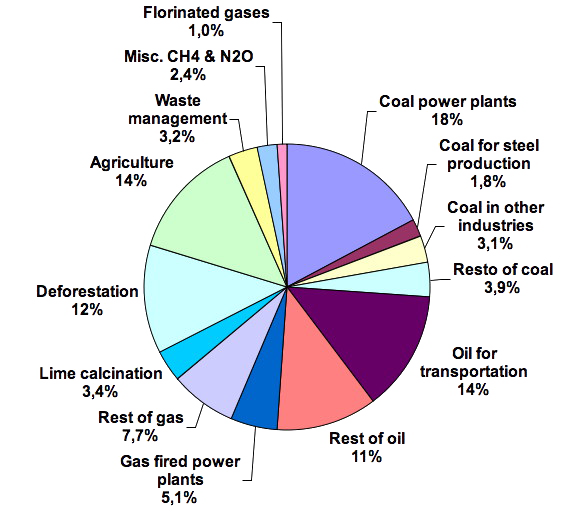 Lime calcination is the process done in cement production (lime is heated over 1000 °C, and the calcium carbonate molecules are broken in calcium oxide and CO2). One will notice that coal fired and gas fired power plants together account for almost a quarter of the world emissions. Therefore considering that “running on electricity” is pollution free is a debatable conclusion !

Emissions arising from electricity are of course very variable from one country to another, depending on the energy mix used. NB: the graph below doesn’t account for emissions coming from extraction and processing of the fuel, what increases by 10 to 20% the emissions per electric kWh for fossil fuels, and adds 10 to 20 grammes of CO2 for nuclear and hydro). 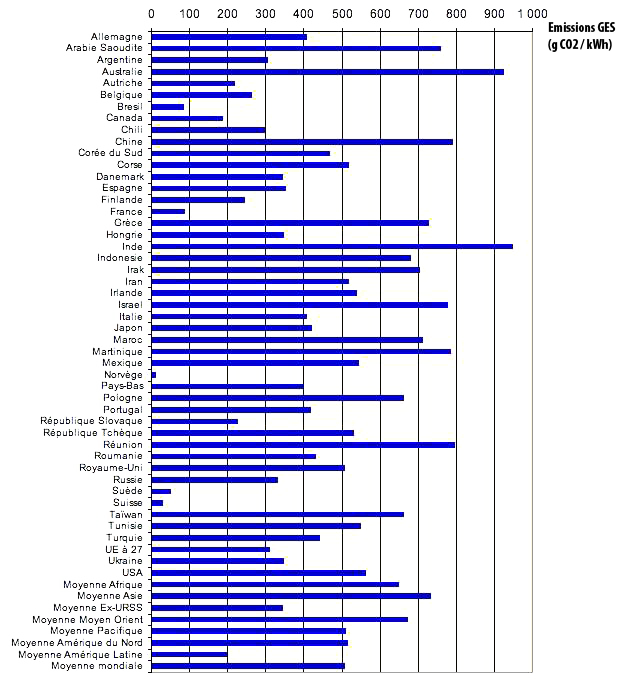 CO2 emissions per electric kWh for a number of countries in 2006.

(the names are in French but easy to guess !)

When electricity is mostly produced with fossil fuels, which is the case in most countries in the world (only France, Switzerland, Norway, Brazil and Sweden are not in this case), then the CO2 emissions per km can become close to what they are with oil for a car that has the same mass and engine power (if most of the electricity generation is done with coal it can even be superior).

What global picture for one car?

We can see, at this point, that, when discussing the advantage of electric cars, we must be more comprehensive than what is generally done, and:

From my experience, I can tell that finding comparative analysis that do all the above is far from easy…

What global picture for plenty of cars?

If we really want to massively shift petrol cars to electric cars, it might be a good idea to have a rough idea of the additional electricity we need to power all those vehicles. Let’s start our calculation with France:

The electric car is no silver bullet, but as good an idea as the context in which it takes place. On a global scale, road transportation uses about 2 billion tonnes of oil every year, that is 20.000 TWh of energy. With the fact that an electric car is 2 to 3 times more efficient than a gasoline car, turning the road transportation system to electricity would require 8000 to 10000 TWh, or almost half the present electricity generation. Electricity in transportation is therefore an idea as good as the context in which it takes place: converting all cars to electricity, if in the same time the fleet is divided by 2, cars are used 4 times less, composed of small vehicles, and fed with electricity coming from pretty “clean” means of production (solar or nuclear), is definitely a solution to consider.

One of the avantages of having electric cars might be that it could transfer diffuse emissions (those of the exhaust pipes) to concentrated emissions (those of coal or gas power plants !), then allowing carbon capture and storage… but it has to be part of the plan !

But to advocate the massive conversion to electricity of all existing cars (or worse: all cars to come if we prolongate our desires), each car being used as much as today would be a “solution” that only moves the problem:

This reflexion is not valid for hybrid cars, that own both an electric engine and a thermal engine, and are more efficicent than “classical” cars (because they get back the kinetic energy when braking to convert it into electricity, and use the electric motor at low regimes, when the thermal engine has a very low efficiency), because these cars do not require additionnal power plants.

But this technological innovation does not eradicate all inconvenients of trafic: some gasoline is still required, even if it less than for the equivalent conventional car, (and oil is not renewable, still), and with a continuing city spreading we will get an increasing fleet of vehicles, and thus an increasing congestion.