It’s now been a couple years since I almost stopped to drive for my daily life. Getting into a car is now limited to some going out in the evening and leaving for holidays.

I do not claim that anyone could be in my situation, and the purpose of what follows isn’t the least to erect myself as a model of virtue (and should even less be since I adopted this way of life first of all because I like it, and not because it is “ecological” !), but it seemed interesting to me to describe how my moves are then organized, because I belong to a category that is generally a heavy car consumer : I live in the suburbs and the house is full of kids.

Using a bicycle for short moves has only advantages :

As bike trips are generally shorter than car trips, the above assertion is even more true if the calculation is made per trip.

(*) flat terrain and no wind

It has been suggested that every hour spent riding adds one hour of life expectancy ; it is otherwise established that the soaring of the number of obese and overweight people (being obese increases about every sanitary risk, particularly cardiovascular, but also diabetes, articular problems…) is for a large part the result of a sharp decrease of the physical activity (a chronicle published in Le Monde dated 14 march 2000 recalled that in the US, the number of obese people evolves just as the number of cars in the country). 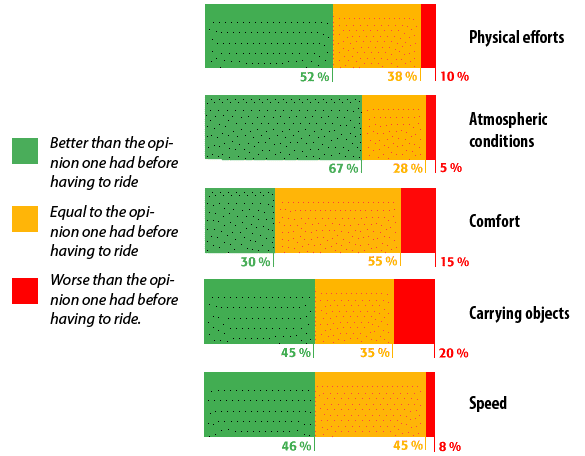 Opinion of the people having to ride instead of driving
NB : The survey was done in Holland only.

This way to move is also interesting for the community, because it saves public money (a good slogan of bicycle supporters could be : you want less taxes ? Just ride !) :