Here is a subject that would probably be most interesting for a philosophy exam ! But I hope that the reader will pardon me to discuss much more practical subjects than what would probably be expected from university students. Still, I will start with this definition of the dictionnary :

“Principle : fundamental rule on which a system is established.”

A principle is hence a rule that must be verified whenever we look at the subject to which it applies.

The “polluter-payer” principle, with such a definition, implies that as soon as there is a pollution somewhere, the entity from which it originates is supposed to assume the consequences of its behaviour, without any possible exception (otherwise it stops to be a principle !). In the name of such a principle, it is for example usual to consider that :

But are we aware of the consequences that would derive from a “universal” use of this principle, what should indeed be the case if it is a true principle ? Here are a couple of thoughs, to feed the discussion.

What does it mean that it is possible to “repair the damages” ? Regarding damages caused to the environment, we might say that they are reparable if it is possible, from the degraded state caused by our pollution, to put more or less the environment “back in shape”, that is in a situation similar to that it had before we degraded it. Well there are plenty of cases in which this is simply not possible, like for example :

For all these damages, that are beyond repair whatever means we would wish to invest, collecting money to pay for “fixing” the damages has no sense. From there, the “polluter-payer” principle, applied to such cases, is only useful to deter a given behaviour. But then one should be careful about what follows.

Making the author of the nuisance pay can also be used to dissuade him to act that way, just like we do for cigarettes or alcohol. Let’s assume here that this principle is invoked to impose a tax on a reprehensible behaviour : we will get a financial resource out of it, that will last just as long as the faultive behaviour and that will be of more importance if more people behave in a reprehensive way. This might induce strong perverse effects :

In short, imposing some taxes on a nuisance in the name of the “polluter-payer” principle can precisely prevent, afterwards, to get rid of it !

A couple of other possibly surprising consequences

Let’s imagine that as soon as there is a nuisance – now or later – the polluter has to pay for it, at a level that deters him (her) to continue, in order to eradicate the nuisance. Implementing such a rule in a systematic way would have the following consequences (I don’t discuss whether they are good or bad, I just underline some logical conclusions) : 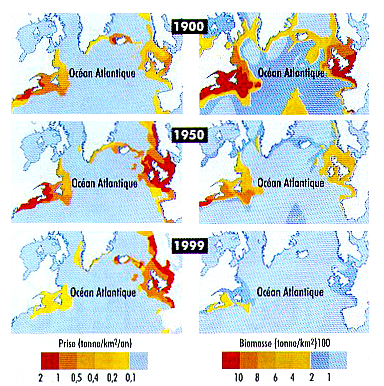 Catches (on the left, in tonnes per km² and per year) and remaining biomass (right, in hundred tonnes per km²) in the northern Atlantic, reconstituted for 1900, 1950 and 1999 by 23 different models from catch data.

One will note a division by 10 of the marine biomass in one century. Not bad…

If we impose some taxes – or quotas, which is economically equivalent, in the way that it incitates to produce less with a higher price per unit – on the fisherman to dissuade him from fishing too much, we will pay fish a higher price and get less of it. We will also pay a higher price all that derives from fishing, including goods as far from fish as poultry (industrial chicken are partially fed with fish flour !), milk (some cows are given fish derivates !), or…..raised fish, as it mainly concerns carnivorous species (like salmons, turbots, or basses), and thus only represents a displacement of the problem : it is necessary to catch wild fish to feed the raised fish…

As we all are, as end-users, the beneficiaries of the activities that are a nuisance for the environment, even though we disapprove of these activities as citizens, we must come to the evidence : a broad implementation of the “polluter payer” principle is clearly equivalent to the fact that we accept to pay in order to preserve the planet and to the detriment of our short term material consumption.

One might consider that, as the planet is finite, a day will come anyway when our species will have to give up the present level of material consumption, because prolongating the trends for a couple of thousand years (this is what “sustainable” means ! and not just lasting for an extra 20 or 30 years) with a couple billion individuals on Earth consuming as much as today is not compatible with the known resources, and by far.

However, are all the supporters of this principle – many journalists, to start with, that often invoke this principle to criticize the lack of action of politicians – ready to bear the consequences of a broad implementation, including the above-mentionned examples? Open question…