NB : the general conclusions of this page probably apply to all western Europe and Japan.

In 2002, France consumed 95 million tonnes of oil, of which 50 million tonnes went to transportation, which is more than half of our total oil consumption, and close to 2/3 of the fraction that is used as an energy source (graph below). 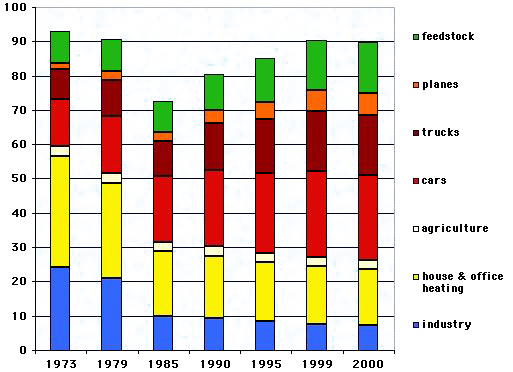 Breakdown of the consumption of oil products, in France, from 1973 to 2000, in million tonnes.

One will note the very fast decrease, since the 1974 oil shock, of the consumption of the industry, and the very fast growth of the transportation sector (cars, trucks and planes).
“feedstock” refers to the use as raw material in the industry.

Many hopes are put in biofuels to replace all this oil, that will not last forever. Is it possible to estimate the potential for this solution, often presented as very “green” and renewable ?

Schematically, there are two types of crops that allow to obtain a liquid fuel from a field (which is the usual way to obtain a biofuel !) :

On the grounds of gross outputs, we can make a first rough calculation of the surface that it is necessary to allocate to “energetic crops” to replace by biofuels produced in France all oil used for transportation in France, that is 50 millions tonnes (or 50 Mtoe) :

The above percentages, obtained on the grounds of gross outputs, are already significant : we understand right away that we (in France) will never substitue all gasoline by “oily biofuels”. Nevertheless, it remains possible, when looking at there figures, to think that we have a real potential with beets. Alas, things are not so simple, and we must reason with the NET output of this line. Indeed, to obtain these biofuels, it is necessary to spend some energy :

If we want to totally replace oil (and natural gas, that is no more renewable) by biofuels, it is not by using oil (and gas, for fertilizers) to produce these biofuels that we will manage to do so ! Therefore we must deduct from the gross energy obtained the upstream consumptions, for fertilizer manufacturing, culture, cropping, and processing after crop.

Well taking into account all these upstream consumptions will lead to net outputs much inferior, and almost null for ethanol ex-wheat.

Why such a drop for beets ? It is that distillation consumes a lot of energy, about the 2/3rds of the energy “enclosed” in the alcohol obtained. The energy required for fertilizer manufacturing and powering the tractor do the rest. Thus “all crops are equal” and yield a net output of 0,75 tonne oil equivalent per hectare, except wheat that yields almost nothing on a net basis.

To produce 50 millions tonnes oil equivalent, we should thus mobilize, in rough figures, 3 to 4 times the present arable land surface of our country. Of course this is not possible, and even producing 10% of this amount out of biofuels would require 30 to 40% of the present cultivated land, and we did not mention oil for heating so far.

One can therefore easily realize that biofuels will not allow to substitute “one day” the oil that we presently consume, and not even a significant fraction of it. In other words, to consider that it is not annoying to have a way of life heavily dependant on fossil fuels because, “one day”, we will all be able to drive (and heat ourselves) on biofuels is alas to cherish an illusion.

And somewhere else in the world?

But, a reader might think, maybe that what is not possible for France, which is a country not so large and densely populated, is true for the world as a whole ? Well well well, the total amount of arable land for the planet is 1400 million of hectares (source FAO). Given the rough correspondence given above, that is a net production of 1 tonne of biofuel per hectare, we see that converting to biofuels all arable land would yield 1400 million tonnes of oil equivalent per year, when the world consumes today….3500 million tonnes per year. In short, provided we accepted to stop eating, we can run a third of the present car fleet on biofuels !

Allocating 10% of arable land to biofuels would allow a net production of something like 4% of the present consumption of oil products. Even if we assume that we could, with tropical varieties, have a significantly higher production of oily seeds per hectare, we remain very far to having a solution of the good magnitude compared to the “oil problem”.

Can we drive “without greenhouse gases” with biofuels?

And at last, regarding greenhouse gases emissions, one is tempted to consider that any biofuel is “fossil CO2 free” and therefore that these fuels are “clean”. Nothing could be more wrong (generally speaking there is no such thing as “clean” energy). Indeed :

Therefore considering that generalizing biofuels as they are produced today would allow to freeing us from fossil fuels is going a little too fast !

And at last, if we generalized biofuels we would be tempted to have agriculture as intensive as possible, what could only increase the other impacts – already significant – of agriculture on environment, for example through pesticides.