Ah, it would be so nice…. done with refineries or pipelines that explode, tankers that spill their oil, climate change, coal mines, nuclear power plants and all the rest : a couple of windmills, a couple of colza fields, and hop ! everybody lives about like today, happy ever after in a world that got rid of its problems. Is it theorically possible to allow us Occidentals to keep a world close to the one we know today with just renewable energies ?

All that follows is based on my personal analysis of the french statistics on energy consumption (if you are curious explanations are here), but the general purpose is probably applicable to any “occidental” country except, maybe, Australia and Canada.

Our energy consumption: what are we talking of, exactely?

Ask any of your neighbours what “energy savings” means for him (or her), and chances ares that he will quite exclusively mention low concumption light bulbs or efficient windows. Does it mean that most our energy consumption is located in lighting and house heating ?

Lighting is part of the item “electricity uses, heating excepted”.
“use as feedstock” designates hydrocarbons that are not burnt but used as raw material by the chemical industry to manufacture various products (plastics, washing powder…).

The percentage corresponding to each use can be seen on the pie chart on the right.

This broad view enables to see that we actually consume energy through any daily action (traveling, being in a home, but also buying about any product or service), and if heating is not a negligible item, with 20% of the total energy consumption, lighting represents less than 1% of the french total. All the rest corresponds to “something else”. Let’s see how renewables might – or might not – be a possible susbtitute to the present sources.

I’ll be accused of choosing an easy start : I’ll begin with the easiest item to “evacuate”. 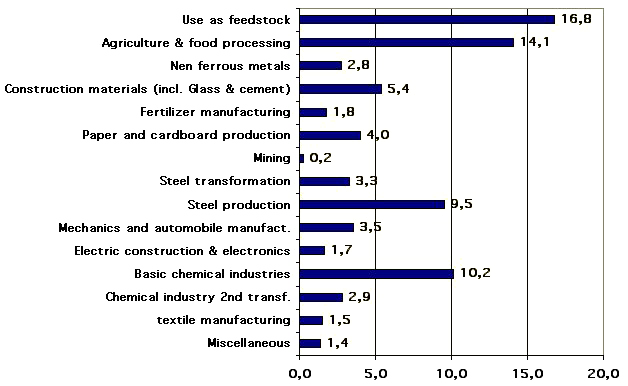 Breakdown by activity of the energy consumption (in Mtoe) in industry and agriculture in France.

From the above graph and data available otherwise, it is possible to draw some first conclusions :

In the vast inventory shown on the graph, what is the potential for renewables?

In short, among the 80 Mtoe consumed by the french industry, only 30 (electricity) could be supplied in a “renewable” form provided we multiplied dams by 3 in France, and a small fraction of heat (50 Mto) could be substituted by wood, geothermals, and solar energy. The fact of not haaving oil or gas as a feedstock any more would lead to a decrease of production that I am not able to quantify, but a division by a factor anywhere between 2 and 10 seems more probable than a 5% decrease.

This resoning is probably duplicable for any “developped” (that is industrialized) country.

This item represents today a fourth of the energy consumption in France, if we include part of the “energy” sector (see the first chart of the page), that corresponds to refineries, these plants producing mostly car fuels. “Saving energy”, to come back to the question introducing the present page, therefore also means movinng less !

The options to replace oil – the main energy for mobility – are here :

In conclusion, to substitute oil, we could call on hydroelectricity, solar energy, biomass or wind power, but :

In short, even with the better efficiency of electric engines taken into account, the mobility that we have today can’t be satisfied with just renewables. A division by anything between 4 and 10 seems more probable than 10% decrease if oil is not here any more. Even a massive call on nuclear energy, given the problems posed by the storage of electricity or hydrogen, would probably not allow the conservation of a level of mobility close to the present one.

We consume energy through eating ?!? Yes of course, directly through the fuels put in the tractors, and through the “conservation processes” (cooking, freezing, etc). We also consume indirectly energy through the manufacturing of fertilizers, and the fact that each time one buys a “ready-made” or processed food, with a metal, plastic or glass packaging, one “buys” in the same time the energy that has been used to manufacture the packaging.

What can the renewables do here ?

The agriculture in a world that only calls on renewables is therefore organic (or not far from it), but delivers much less meat per inhabitant than today. 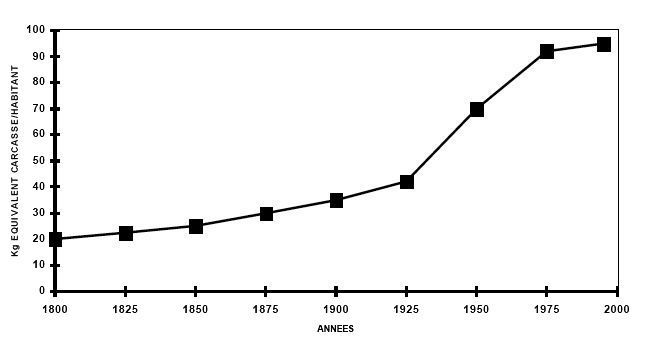 Meat consumption (kg carcass weight) per person and per year for France, from 1800 to 2000.

The burst of the meat consumption happens just after the Second World War, when “synthetic” fertilizers and pesticides start spreading, showing that an important meat consumption and an intensive oil dependant agriculture are strongly coupled for the time being.

The “synthetic” fertilizers – manufactured from natural gas or carried from the potash mines thanks to oil – have enabled a burst of yields, sine qua non condition to be able to feed a lot of animals that we will then eat. In a kg of “industrial” beef, there is roughly 3 kg oil equivalent of energy : how many opponents to oil and nuclear consider that anyone is entitled to eat steack without restriction ? The true ecologist is Coffe !

Heating – be it houses or large buildings, the latter referring to plants, offices, or schools – requires roughly 50 Mtoe per year in France, that is a fith of our primary energy consumption. It is probably in this field that the substitution possibilities are the most important :

Provided we accept to have less timber wood, and pretty less paper, and combination of thermal solar and wood could probably provide the bulk of our energy consumption for heating in France. Still wood is heavy and can be carried only with a non ridiculous energy spending : wood heating is more efficient if the place where it is used is close to the place of production, which means that packing up 80% of the population in large cities that require long distance transportation for supplies kind of “links” to non renewable sources (easy to carry) for this use also.

Still heating is the use of energy for which the possibilities are the most important.

Other energy uses in the houses

We will find here hot sanitary water, cooking, and electricity which is not used for heating and called “specific” (it designates electricity which is used to power a washing machine, a fridge, an elevator or a TV set, and in general for any use for which electricity can’t be substituted by gas or fuel oil with present technologies).

The discussion on hot sanitary water (showers, etc) is exactely the same than for heating (see above), beacause it is frequent that heating starts by producing hot water that will be circulated through radiators. As heating sanitary water consumes only a fraction of what we use for heating, renewables can also do much for this use. Actually solar heaters are today the most widely spread devices among those that enable to use renewable energy supplies.

For specific electricity, that represents roughly 30 Mtoe per year in France (that is 15% of our primary energy consumption, using the appropriate conversion factor), the breakdown is as follows : 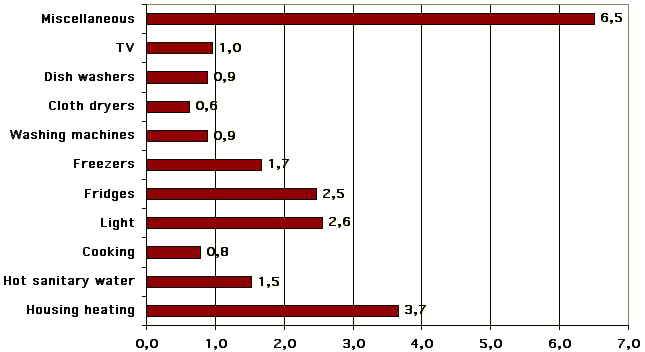 Electricity consumption in houses and appartements in France in 1999 (Mtoe).

A couple of explanations and commentaries on this chart :

What can our renewables do here ? The corresponding consumption, that is140 TWh in France, could be produced with a fraction of the roofs covered with photovoltaic solar panels (see details of calculation), because we face here low unitary amounts, compatible with a decentralized production such as the one provided by photovoltaïc solar.

But it is necessary to manufacture the panel and the battery, and store the electricity for periods without sun : all this induces significant losses. In addition, all roofs are not turned to the south, so it seems likely that such a way to proceed could only deliver a fraction of the present electricity consumption. For wind power we would also have to manage the problem of intermittence, even if we are able to build 100.000 or 200.000 windmills, but hydroelectricity allows to get over all these inconvenients, provided we are able, in France, to triple the dams just for this item (in house electricity consumption).

It is reasonnable to consider that a world that would call only on renewables would have serious differences with the one we know. Material abundance, that supposes, to start with, a massive production of steel, concrete, etc, is not possible at the level we know – and even not possible at all for some specific materials very hard to obtain without oil – with only these sources. Besides, storage problems for the intermittent modalities, with the associated losses that it represents, the land use required by most sources, and the limitations inherent to the laws of physics (nobody will change the kinetic energy of a moving mass of air) result in the fact that our present world – where abundant energy is omnipresent – can’t be sustained with just renewables, and by large. From there, is it wise to render our world a little more dependant on non renewable resources every day ?

Let’s add the trying to convert to renewable energies all that could be would lead to a land use that many “ecologists” would probably not like : it would be necessary to cover almost all France of dams, forests intensively grown for wood fire (with a low biodiversity), windmills, and crops for biofuels. Does such a picture correspond to a “clean” develoment ?

It is likely that, except if we set up a massive program of breeders (but 40 years are necessary to complete such a prograam : in no way can nuclear energy be used as a “spare wheel” to quickly replace fossil fuels the day we are anguished by soon to come shortages or bythe possible consequences of climate change), the energy abundance will end with the depletion of the fossil fuels, renewable energies being totally unable to replace fossil fuels at the present level of consumption, even if, of course, thay have a place on the future supplies.

Even calling on nuclear will not allow to keep the present organization of occidental societies, as electricity is not able to substitute oil as a raw material in the present world. The first thing to do, if we want to be prudent, is to enage in a division of the energy consumption by 2 or 3, and not to increase it “as soon as everything is fine”, thinking that renewables will be able to take on the day it is needed.