That’s an easy go: non conventional oil is oil… which is not conventional. What is conventional oil then ? It’s oil that went through the complete and regular cycle of oil formation (reading this previous page is strongly advised before proceeding). It was created in a mother rock through pyrolysis of kerogen, then went through primary and secondary migrations, then got trapped in a reservoir rock below the ground, or offshore but with less than 500 metres of water above. In the last case, it is the operating conditions that are non conventional, because the oil found offshore is not different from oil found under other circumstances.

From there, one will deduct that non conventional oil can be :

A single expression (“non conventional”) therefore designates products that can be pretty different one from another :

Where is non conventional oil located ?

Offshore fields are found… offshore. They can be found everywhere: Latin America, Africa, Gulf of Mexico, Sea of China, etc. Tar sands and extra-heavy can be found in various locations, but two places concentrate most of the reserves:

Oil in place is supposed to represent considerable amounts: several hundred billion tonnes (about 500, to be compared to roughly 180 billion tonnes of proven reserves for conventional oil). But:

As a result, the proven reserves in Canada are presently limited to 23 billion tonnes, when, once again, oil in place is 10 times more important. The two following graphs present possible paths for the production of these resources. 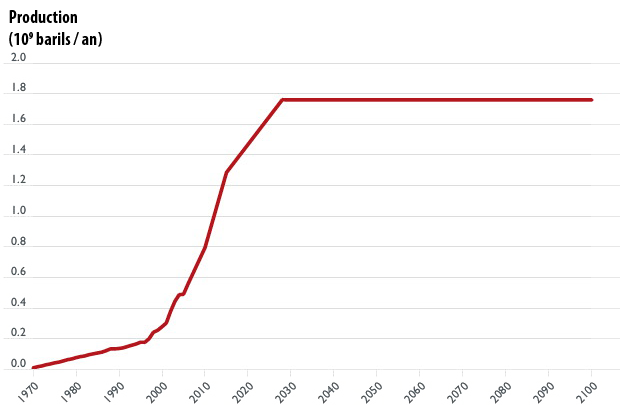 To 2015, the production follows the projection of the Canadian Association of Petroleum Engineers, then the growth is maintained to 2030, and after that date it remains flat. In 2100 the cumulated production amounts to 140 billion barrels, that is one third of the ultimate reserves. 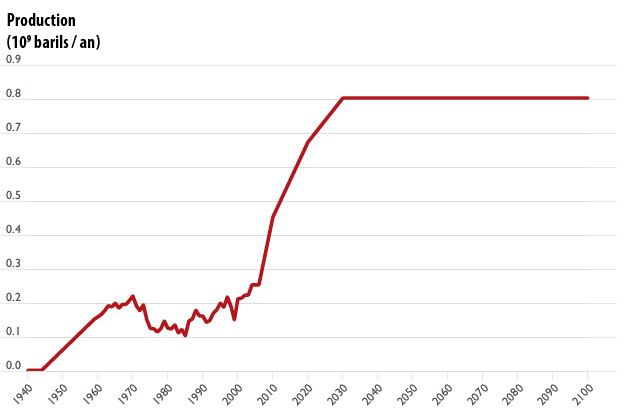 An example of production profile for the extra-heavy in Venezuela, in billion barrels per year.

This profile also assumes that production triples to 2030 then remains flat. In 2100 the cumulated production amounts to 60 billion barrels, that is 20% of the ultimate reserves.

All this non conventional oil is now generally taken into account in the forecasts regarding future production. The graph below shows the contributions of all kinds of oil, and we can see that non conventional oil allows to shift the peak by 10 years, more or less, but not much more. 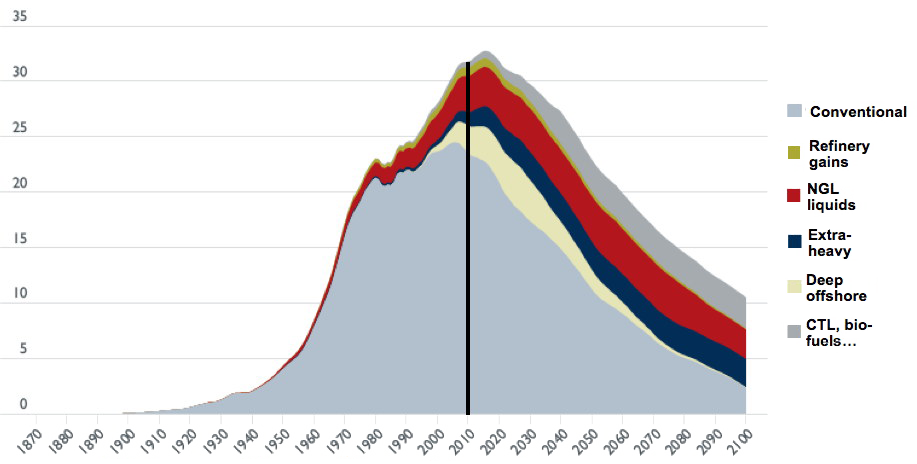 Simulation of the world production of “liquids” (oil and all products alike).

The vertical bar represents 2010. With this simulation the maximum happens during the 2010 decade. Extra-heavy, deep offshore and coal to liquids add a significant fraction to the total after the peak but do not significantly change the date of the peak. But in 2100 these non-conventional hydrocarbons would represent much more than half the production.