Everybody should agree: extracting oil from the ground is indeed easier if this oil has been previously discovered. The first step for operating an oil field is therefore… to find where that field is. This too obvious fact explains nevertheless why the global shape of the curve of discoveries over time constrains the shape of the curve of production over time: it is hard to extract an oil never discovered !

Looking for oil starts with… administrative formalities. When, on the basis of evidence that does not require thorough examinations or highly technical analysis (sitcking to basic geological analysis of sedimentary basins, various surface observations, extrapolation from similar zones already explored, etc), oil geologists consider that there is a chance to find this precious liquid somewhere, then the company they work for asks to the country that owns the underground the possibility to go and take a closer look.

Why ask the state ? Because, in most of the countries in the world, it is not the land owner who also owns what is below the ground, but the state. So it is to the state that the company should ask the authorisation to go and look (actually they must also ask the land owner the right to install surface equipment). When the company is the national company that wants to explore its own country (like Saudi Aramco wanting to explore Saudi Arabia), it is obvious that the formalities will be more simple (and successful !) than when it is Chevron asking for the right to explore the russian or iraqi underground.

There is a notorious exception to what is mentionned above : the US. In this country, the land owner is also the owner of any resource located underground, without any depth limit. This explains why the US concentrate almost a half of all exploration wells that have been drilled in the world, though they have owned only 5% to 10% of the reserves over the last 30 years. Anyone can drill a well in his own backyard if he feels like it, and if a single field lies below multiple properties, the owner of each property can drill a well within his own land to look for oil.

Once the state has granted the license to explore (what generally costs money to the company), the real exploration can start. It is composed of two stages (see the page on reserves for explanations):

An exploration well costs a couple million dollars on average. And, still on average, one on six leads to oil and/or gas discovery that will justify a commercial production. Anybody able to substract 1 from 6 has understood that, 5 times out of 6, the exploration well will either be dry, or reveal oil in too small quantities, and the company then abandons the license. 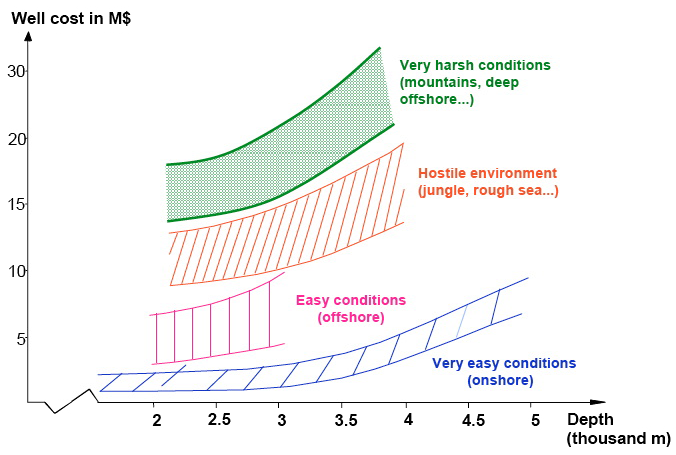 Cost of an exploration well depending on surface conditions and depth.

When “something is found”, the company still needs to understand what exactely has been found, because “finding oil” is actually identifying an underground porous rock formation, with holes that communicate more or less well, and filled with a mixture of water, oil and gas, at a temperature well above that of the surface, and at a pressure that can reach several times that of the surface (for conventional oil).

Simplified description of the two basic configurations for an “oil field”, which is actually a reservoir rock containing water, oil and gas in various proportions.

Therefore in most oilfields there is a production of both oil and gas.

In most cases, the shape of the reservoir-rock is complex, and looks like what is represented below. 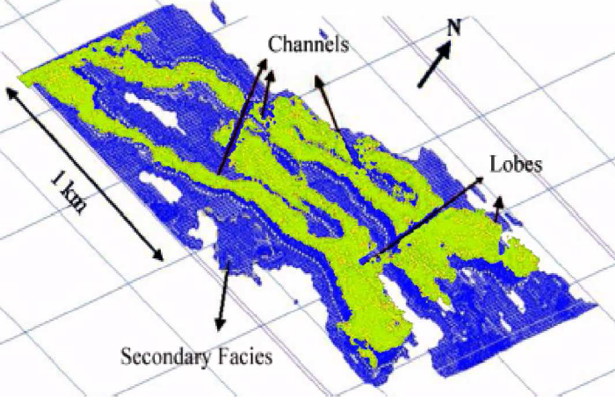 Example of the “real” shape of an oil reservoir.

This explains that: when the exploration well is positive, the operator still does not know exactely how much “oil in place” (and “gas in place“) the field contains, that is what is the effective amount of oil and gas enclosed into the rock. The company also ignores at what rate it can effectively flow out. The last step before decinding full scale production is therefore to drill an “appraisal well”, which allows the same flow rate than a standard production well, to see whether the actual flow confirms the potential of the field or not.

If this last test is successful, the construction of full scale production infrastructure will be decided. At this stage, 10% of all the money that will be spent on the field has already left the company’s pockets, and 3 to 10 years have elapsed since the first move to negociate the exploration permit.

“To develop” an oil – or gas – field is building the infrastructure that will allow to “produce” the oil coming from the field. But this new step generally requires a new negociation with the administration of the country in which the field is located, to obtain a production license (that can sometimes correspond to puts or calls present from the very beginning in the exploration license). Obviously, when a national company negociates with its domestic administration, things are not the same than when it is a international company that negociates with the country.

The production license negociated between the country and an international company will essentially stipulate how risks and benefits are shared. The company can be a simple technical operator (it is then paid a flat amount to build the infrastructure and/or operate it, no matter how much oil is produced) or can fully assume the production risk (it then accepts to loose money if too little oil is extracted), and cashes in the full price of the oil extracted, minus a fee, flat or proportional, paid to the state owning the field. And of course a variety of contracts in-betweenthese two extremes exist.

Once the production license is granted, building the production infrastructure can begin. This stage is called “development”. And it costs a lot ! It means drilling the production wells, of course, but not anly: it is also necessary to build the housing and facilities for the staff (an oil field keeps a number of people busy !), processing units (for example units to separate oil from the assicated gas ; a flaring unit ; pre-treatments on oil or gas…), storing facilities, a terminal for tankers or a pipeline embranchment, and various other things. 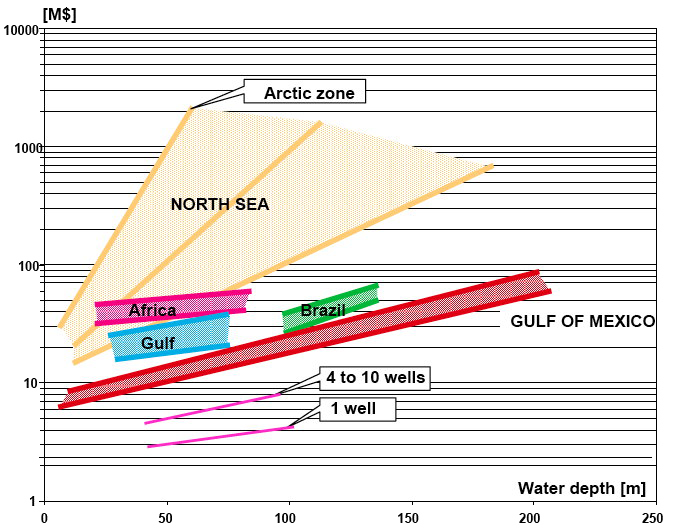 Order of magnitude of the cost of an offshore production unit (for a unit onshore, costs are 30% to 50% lower).

The money we are talking about goes from several million dollars in very easy conditions (shallow water, Gulf of Mexico) to a billion dollars (very hostile marine environment, as in the northern part of the North Sea), with a mean value of several ten million dollars for a number or zones. A single rig can have several wells.

When the development is completed, all the production infrastructure is up and running, and the company has spent about half the money for the total costs of the field. An additional 3 to 4 years have elapsed, which means that the company has now spent money for 6 to 15 years without earning a single dollar yet. It is easy to understand why oil companies “need” huge profits: they also need a lot of capital that remains unproductive for a long period of time.

All is now in place, and production begins. It will go through 5 stages:

Volumes coming out from the field of Vicq Bihl. Volumes are in thousand tonnes per year.

At the beginning, oil and gas come out of the field “about pure”. Then water begins to be injected, in growing amounts, when the oil production declines. It helps to better “wash” the field, but does not prevent the decline.

Incidentallly, this water injection technique makes things even more difficult to extrapolate production from the observation of production facilities: in the case of “pure” oil coming out, an external observer (or industrial spy !) can more or less easily deduct the volume produced by observing the size of the pipes, pumps, etc. But when water is injected, it is also necessary to have the ratio of oil on water, that can be anywhere between several ten % and several %, and there is no obvious way to deduct that ratio from the size of the infrastructure.

A linear regression shows that this ratio increases – on average – with field size, which suggests that the fraction of oil that will be recovered from future discoveries will be lower than what it will be for older ones (because the average size of the field discovered decreases with time).

For the world as a whole, it is obvious that the extraction ratio of the initial oil in place conditions the utimate reserves, and therefore the date and height of the production peak.

If we summarize, operating a field means: 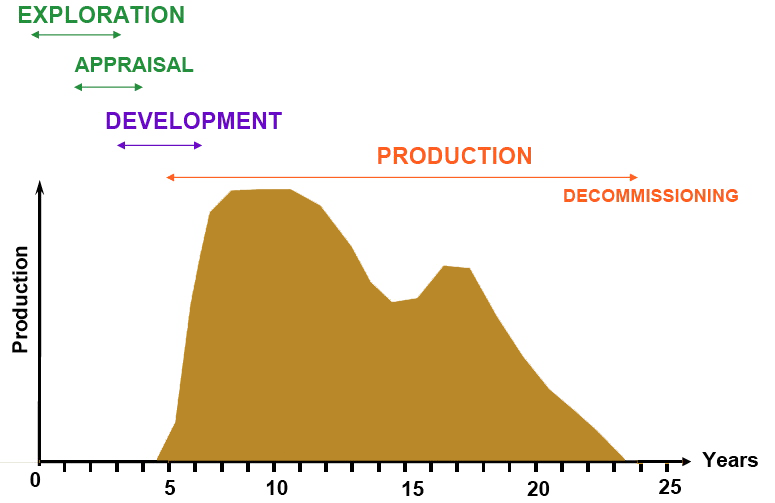 Synthetic view of the life of a typical field, the origin corresponding to the initial demand for the exploration license.

The world oil production being a pile of field productions, it will follow more or less the same profile. As for a single field, the world has an initial endowment of oil which has been given once and for all, and then production necessarily goes through a maximum then a decline. A secondary maximum (or even 2 or 3) do not contradict that conclusion.

And again, exploring and producing… just to keep the world oil production constant

During most of the production stage of an field, it will then provide oil… in decreasing amounts. Something obvious then comes to mind: in order for an oil company just to maintain a constant production level, it must constantly develop new oilfields, and that is true for the world as a whole. This explains why, without a constant flow of new investments, production decline almost immediately. And it is even not true to deduct that evergrowing investments will allow an evergrowing production !

Once the oil is brought to the surface, it is then transported… towards a refinery (actually oil producers have only one category of clients: refineries ! These are often operated by distinct subsidiaries of oil companies). It will be transformed into refined products, that will be used… and destroyed at the same time (even most of the plastic), then contributing to putting back in the atmosphere, at an accelerated pace, CO2 that had been taken there hundreds of million years before.