This “strong dependancy” point of view, if it proves valid, also means that trade union leaders are mistaken regarding their true “ennemies” when they vituperate against the bosses’ unions, or God knows what minister or political leader when the unemployement rate is rising. The real culprit is actually the price of oil !

Those that consider that the dependancy is weak have of course an exactly opposite conception of the way things work: the price of the barrel is of marginal influence on the expansion of human activity, the true determinants of the strenght of the “economic growth” being the policies followed by the governments.

To know who is – maybe – right, isn’t the best way to investigate what story the statistics tell ? This little page offers a comparison over 20 years of the respective evolutions of the price of oil (in constant 2004 dollars, and on average over the year), the unemployement rate in the OECD, and the economic growth in the same zone. If the “strong dependancy” point of view is correct, it must then be possible to find a correlation between the oil price and the other economic indicators, that remains valid for the full period and the whole zone, beyond national differences in the way to handle the economy and the various leaders in office during these two decades.

Before we go on, we must recall that statistical series often have the very bad idea to be prone to what is called “inhomogeneities”: suddently, the same phenomenum is accounted for in a different way, or has always been accounted for in different ways depending on the country. Unemployement is a good example of this: some countries call “unemployed” someone that didn’t work at all during the last month, while some others still consider unemployed someone that worked less than so many hours during the month.

As a result, it is not always as easy as it seems to have long and homogeneous series, and that might hinder comparisons. The rest of the discussion is based on statistics that begin in 1979, which is the year, as a matter of fact, where oil price peaked for the 20th century in constant 2004 dollars, as the graph below shows (but the highest ever for all times, in constant 2004 dollars, was reached in … 1864 !). And it is possible, of course, to have major economic crises with the price of oil remaining low, as it was the case in 1929, but it is true that then transportation didn’t play the role it plays today in the economy. 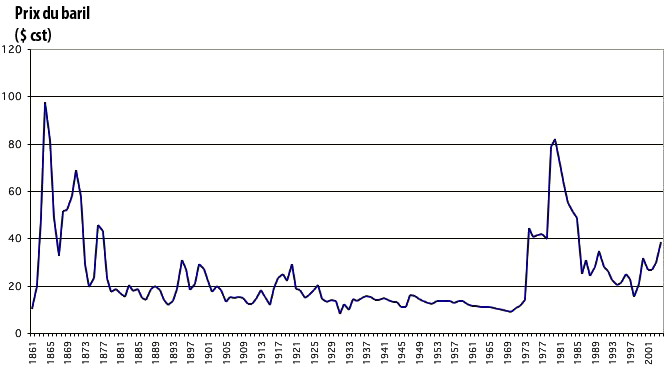 A first way to perform the comparison is to put on the same chart the values for the economic growth, the unemployement rate, and the average price of the barrel for the year. As these values are very different (the economic growth rate or the unemployement rate are expressed with several %, when the oil price is several tens dollars), we will perform first a “normalization”: we multiply by 100 then divide by the value of the year 1979 the whole series. The output of this little process is a new series with the value of the year 1979 which is always equal to 100, and then the values increase or decrease reflecting the exact trend of the original series, but with numeric values that “wander around” 100 whatever series we address, what allows comparisons on an unique graph with a single scale.

Compared evolutions of the normalized values (100 in 1979) of the economic growth in the OECD zone, the unemployement rate for the OECD zone, and the price of oil in constant 2004 dollars (average over the year).

This simple comparison thus doesn’t allow to spare the two possible points of view on the dependancy of occidental economies on the price of the barrel. As a raw comparison is by far the favourite exercise done by you and me when we have several series, and most of all by far the favourite exercise performed by many economists discussing the point, it is a little annoying !

But we might now add another processing that will allow to get a clearer view: we will not report the normalized values, but the normalized evolution from the lowest to the highest values for the 1979-2003 period, for unemployement, oil, and the “weakness of growth”. In other words, for each of these series, we will do the following:

All this pain will bring us new curves where the lowest of the 1979-2003 period will receive the value 0, the highest will receive the value 100, and the curve will oscillate between these two extremes elsewhere, reflecting the true trends. And as we should not stop here our “curve manipulation” (maths allowing to manipulate curves: that’s the good side of it !), we will add a little time shift for two series:

Was it worth all the pain ? Looking at the new graph that we get, we might think that yes…

Result of the processing described above for the price of oil (constant 2004 dollars from 1979), compared – in a normalized way – to the”weakness of growth” of the following year, and the unemployement rate 3 years later.

Indeed this graph suggests a strong suspicion of a correlation between:

To show even better these correlations, we might use not the values for the year, but a mobile 3 year mean, which leads to this ultimate graph.

Of course, the above graph has no predictive value yet, because correlations are observed a posteriori, and as long as a “physicial” law is not established otherwise, no definite prediction can be made by simply extrapolating what has been observed. In particular, if oil was the sole possible cause for the evolution of the unemployement rate, there would be not only a good correspondance for the trends, but also for the magnitudes, which is clearly not the case for the above graph.

If it has no predictive value (bis), the graph above seems still to support the idea that occidental economies see their fate depending more on what’s happening below the ground of Saudi Arabia, Iran and Russia, than in the halls of the ministries in Washington, Tokyo or Berlin. Of course, if such a strong correlation is valid in the future, it is very bad news:

If such a fear is somewhat sound, I am not sure that the judgement of history will be very kind with all of us that refuse the voluntary cure to prevent – if it is still possible – such an outcome, which bears a very simple name: a raise of the taxes. Between a progressive “deconsumption” of hydrocarbons, which is of course full of inconvenients, and a dictatorship (that incidentally generally brings a much faster “deconsumption” !) resulting from a strong destabilisation of the economy, it is not sure that our descendants will forgive us to have given them the latter because we refused the first !

At last, if the correlation discussed above is strong, all trade unions and political parties that are not in office can always shout loud at those who are in office when the unemployement rate strives: the true one to blame will be Mother Nature, stupid enough not to have endowed humanity with enough oil for eternity, without climate change of course…. What if we look directely at the correlation between the world oil output and the world GDP per capita ? Well, just ask ! 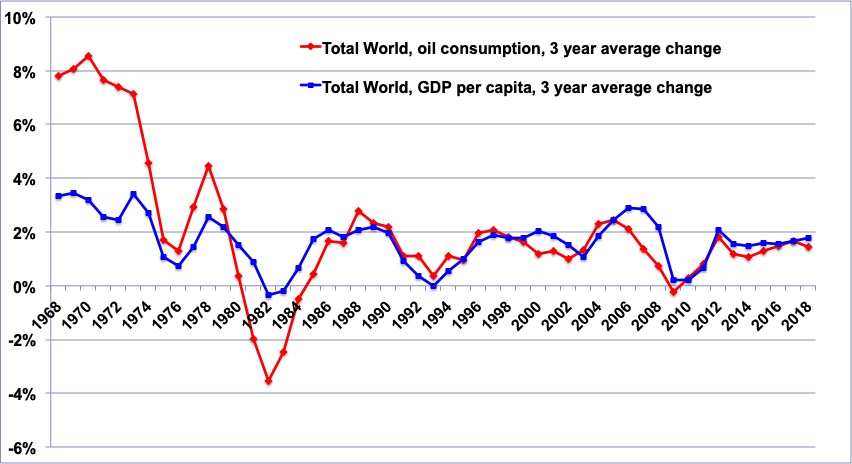 It is easy to see that the two curves behave about the same way after 1986, with the GDP following oil production and not the opposite, and before 1986 the sign of the variation was alike but the magnitude greater for oil than for GDP. This suggest that the dependancy of our economic system on oil has increased and not decreased !

This does suggest that oil – in volume, not in price – has something to do with the GDP.

And then, isn’t it about time that serious studies be initiated on the following question : how can we maintain jobs – and thus keep stable democraties – in a context of long lasting “degrowth” ? Today, everybody prefers to believe that economic growth relies on our sole good will (which is another way to consider that no limits might come from the physical world, a bold hypothesis !), and therefore that the only good question is – and will always be : “what is the good recipe to have everlasting growth ?”. Let’s suppose, instead, that we come back to Earth, and accept this brutal fact that everlasting human expansion is not possible because of the laws of physics: shouldn’t we then get ready to manage with the least damage possible an unavoidable “degrowth”, that seems to be likely for the 21st century whatever hypotheses are made, rather than becoming all red and shouting “I don’t want to”, which is closer to our present behaviour ?