Isn’t oil mostly used for transportation, and coal to produce electricity? If so, why should the price of these two energies evolve the same way? Would so much oil be required to transport coal or gas that all energies would be priced as oil? Indeed, if we look at how much oil is necessary to extract and transport coal and gas, the answer is simple: there is absolutely no reason why the price of coal, gas, or hydroelectricity should follow the price of oil.

But… when looking at the curves, one will see that there can be a strong correlation. It’s been true for Europe, at least since 2000 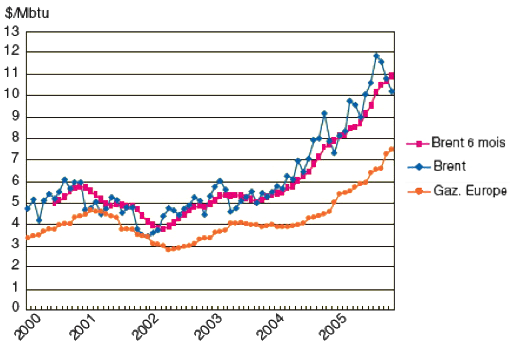 We see that the two prices are well correlated on this time period.

Occasional discrepancies happen on this graph that has a higher resolution than the previous one, but the tendancy is exactely the same.

If we now look at the world, and with annual averages, the answer is still yes… except for the US for recent years. 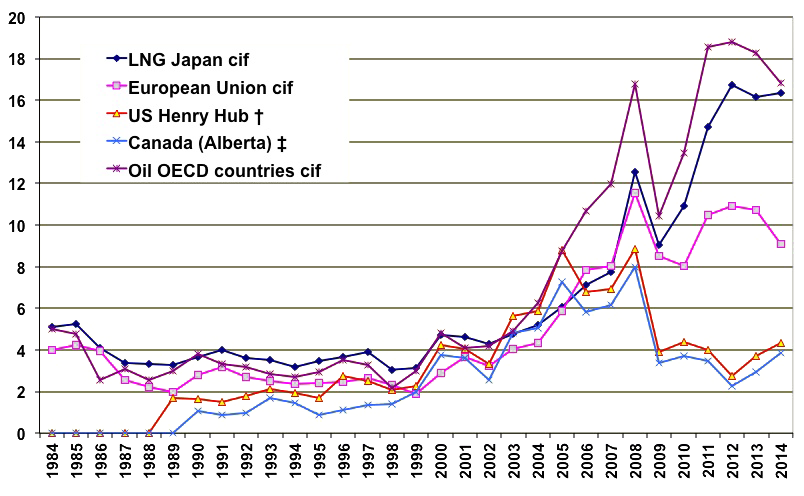 Respective evolutions of the spot price of gas for several markets and oil, in dollars per million BTU (see above for the equivalence of a BTU).

CIF means Charged Insurance and Freight; it is the full cost of the fuel for the buyer with boarding in the shipping country, freight, and insurance.

A strong correlation is clearly visible, except for the US (Henry Hub & Alberta) and recent years, due to the rise of non conventional gas in this zone.

We also note that the price per energy content is close for oil and gas, what is probably due to substitution effects (see below).

If we now look at the respective evolutions of oil and coal, we get a similar picture. 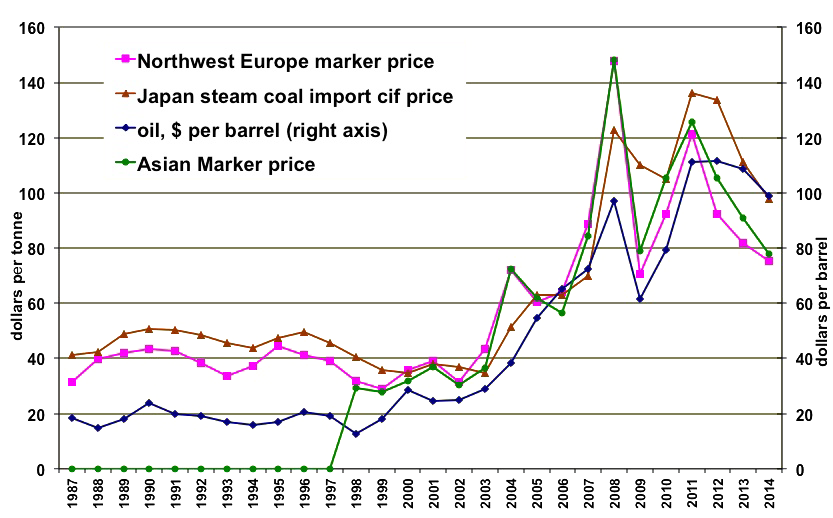 Respective evolutions of the spot price of coal for two coal importers (Europe and Japan), in dollars per tonne (left scale), and oil, in dollars per barrel (right scale).

Now we have a fact, the good question is why! A first reason we might think of is that all energies follow the most important one, since oil represents one third of the primary energy consumption in the world.

Share of each energy in the primary consumption of humanity.

But this answer is nothing close to a good explanation: again, why should coal, used to produce electricity, be priced as oil, that fuels cars and planes?

Exclusivity is always limited in time

Actually the answer is not to be sought in production costs, that would be correlated, but rather as a consequence of something obvious: most energy is sold – and not given for free – to consumers. Well selling something supposes that there are sellers and buyers. If, for a given product, the number of buyers increase, or their will to have a growing share of what is available, and no change happens on the production side, then the price increases.

When the price of oil increases, some consumers start considering using something else, when a substitute is possible. Some changes can be almost immediate (for example in a multi-fuel boiler it is posible to put almost anything depending on what is available, and some power plants are equipped with this kind of device), and some others require a couple years to be done. In all cases it creates an additional demand for other energies that push the prices up. Symetrically when the price of oil decreases it is possible to turn to oil for some usages for which gas or coal was the previous choice.

Among these “substitution effects” we can imagine:

Better say that the price will be the same to be sure that it is the case!

Actually there is one case for which the correlation between prices is not surprising, since it derives from a legal clause: it’s between oil and gas. As transporting gas requires a lot of capital, oil and gas companies – even state-owned – that built gas pipes wanted to be sure that the gas they took care of would be sold at the end. As a gas pipes generally originates from a region that will produce for decades, that precaution should be valid over the long term.

To ensure this, gas companies have included, in their long term contracts, that the price of gas would be indexed on the price of oil, with a little rebate. Acting such, they guaranteed to the buyer that, for any usage for which oil was a possible substitute (which is the case for all the usages of gas, actually), the latter would never regret to have used gas rather than oil. Then it is not very surprising that oil and gas prices are covariant: it is what was designed! And this also explains why the prices are close per energy unit, as a graph above shows.

A same cause for everyone?

And at last some common causes can lead to prices increase everywhere. The first is economic growth, which is actually a process of transformation of natural resources into something else, using energy. When it is strong (for example between 2000 and 2008), it increases the demand for electricity (thus for coal), for steel (thus for coal again), for transportation of people and goods (thus for oil), for industrial processes and construction (thus for gas).

In this kind of context, the prices of all energies increase simultaneously.

With all the possible causes exposed above, something interesting to remember is that, be it for common causes or because of substitution effects, if oil becomes much more expensive it probably means that, in the long run, other energies will also see their price increase.