Each time our precious litre of gasoline costs a little more, there are often people to blame oil companies that would the sole resposible for this price increase. Is that so ? To answer this sensible question, the best is to follow the path of the money ! In France, a litre of gasoline is sold 1,47 euros when the barrel is around 100 dollars. And then: 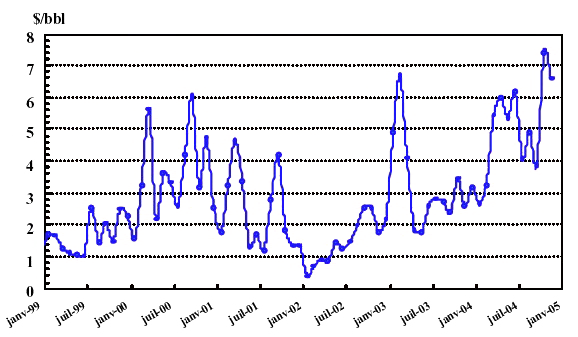 Evolution of the refinery margin in dollars per barrel (that is the sale price of refined products minus the cost of oil), from 1999 to 2005, in France. 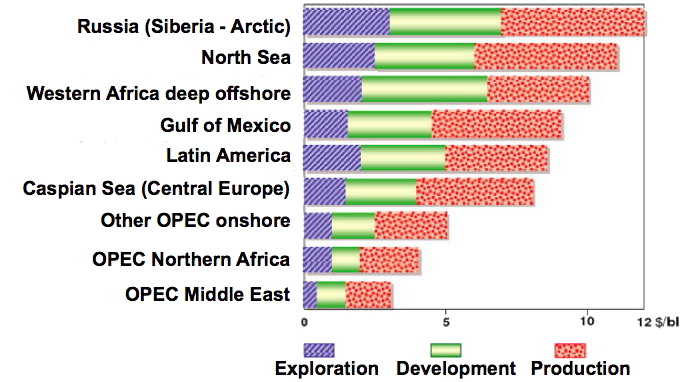 Technical cost of extracting a barrel of conventional oil.

Development is the building up of the extraction infrastructure.

The operating margin of the oil company is therefore around 7 cents per litre when the barrel costs 100 dollars, and for oil easy to extract (conventional, onshore, no “exotic” conditions). An oil company like Total, which has produced about 75 million tonnes of oil in 2006 (or 1,5 million barrels per day, or 87 billion litres per year), probably generates a gross margin of 6,4 billion euros for the upstream activity (on which it is still necessary to deduct general expenses, taxes, etc to come up with a net profit). Therefore suppressing the profit of oil companies would lower the price of gasoline in France by several cents per litre. It won’t change much the conditions of driving in my country !

Besides, most of the car fuel sold in a given country, say France, has not been produced with oil extracted by the company that has its headquarters in the same country (when there is an oil company in the country). Car fuels come from distributors, that buy refined fuels either from refineries located in the same country, or from import companies. Then the refiners buy oil – through traders – to all producers in the world, with origins that vary depending on the needs and prices.

The fact that the refiner is owned by a company that extracts oil elsewhere in the world does not create any link between the oil extracted and the oil refined. So a pressure put on the profits of the extracting company would not necessarily translate to a lowering of the price for drivers that have the same nationality than the oil company. That’s our world !