European “ecologists” frequently like to think that a country that would have a large share of its electricity coming from nuclear power plants is bound to turn away from renewables energies, all the research money which is invested in nuclear energy becoming unavailable for renewables, and that this “embezzlement” prevented renewables from paying a significant part in the energy supply of the country. This argument is pretty strong in France and Germany, in particular.

If there was indeed such a correlation, one should then expect to see a very low share coming from renewables among the european countries that have a high share of nuclear electricity. What do statistics say ? 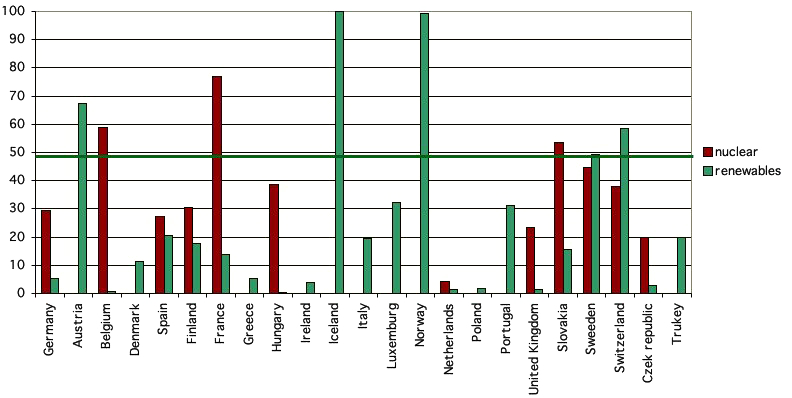 Respective shares of nuclear and renewables (in % of the country total) in the electricity production of OECD countries in 2001.

It is easy to see that Sweden, that ranks 4th regarding its share of nuclear energy in the total, ranks also 5th for the share of renewables, and that manby countries that have no nuclear energy (Denmark, Greece, Ireland, Italy, Luxenburg, Poland, Portugal, Turkey) have a much lower share of renewables than Sweden (green horizontal line), or even than France ! (Denmark, in particular, has a lower share coming from renewables than France, because there are not only windmills in renewables!).

Suppose that we now cross the Atlantic, we can observe that the US, that have less than 30% of the electricity coming from nuclear power plants, do not show the example of an intense effort in favour of renewables either !

US R&D spendings pertaining to renewable energies, in million dollars per year.

The surge that occurred after the oil shock didn’t last (and stopped before the “counter shock”, since oil prices remained very high until 1985).

More generally, saying that renewables should be preferred to nuclear power is supposing :

On the first point, I invite the reader to look at a couple of rough figures :

One will see that all renewables are far from being equivalent, and that, with the present energy consumption in France, trying to substitute nuclear energy by renewables is either impossible, or would generate disagreements far more significant (such as deforestation) than those attached to the existing nuclear power plants. Furthermore one will also see that encouraging wind power connected to the grid is probably not the good action to start with if we intend to develop renewables to diminish CO2 emissions.

On the second point, in order to allow the reader to make his own opinion, I suggest below a little calculation that I find enlighting.

What I will do is sum up, for the two major contributors to the primary energy consumption in France that nuclear and oil represent, the money spent to “prepare the future”. Indeed, the two above mentionned energies represent the two dominant – and roughly equal – contributions to the total. 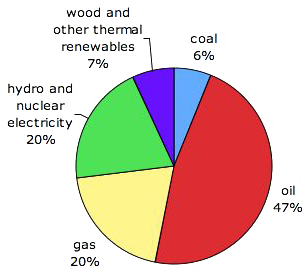 Breakdown by nature of energy of the french consumption of primary energy in 2000.

In both cases there is the need to invest money to “prepare for the future”.

What do we have to pay for oil ? 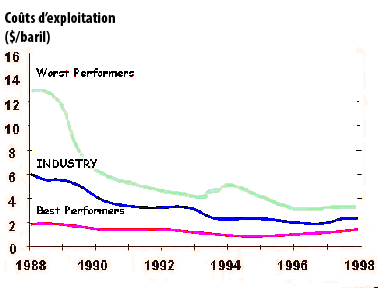 Exploration costs in dollars per barrel.

The overall “R&D” budget of oil that French people have to pay, under whatever form, is about 1,9 billion Euros per year

What do we have to pay for nuclear ?

The overall “R&D” budget for nuclear generated electricity thus amounts to about 1 1 billion euros per year.

As we have seen above, both oil and nuclear electricity contribute for about the same proportion to the total primary energy consumption in France (100 million tonnes oil equivalent for each one in rough figures). It is easy to deduct that, by energy unit, nuclear is about twice as cheaper in R&D costs than oil.