It is pretty frequent to hear – or read – that ecologists and nature lovers are one and the same, or at least to consider that a nature lover is necessarily an ecologist. Is it so obvious ?

Everybody knows what a nature lover is. (S) he feels good in a forest, atop a mountain, or over the sea, and more generally “far from civilization”. (S) he looks for this proximity with nature either frequently, or for daily life. (S) he is generally willing to preserve “natural” sites in their present state, at least those located in his(her) immediate surroundings.

To define what an ecologist is most probably more arduous, because the definition may vary depending on who talks !

An ecologist is therefore more often defined as someone “against” than someone “for” (for nature, for anything else…). And to get things confused a little more, for a journalist an ecologist is simply anyone that self-claims to be so, preferably under the cover of an “official” label, what creates a lot of possibilities !

For the press (thus for the general public) to be an ecologist it is sufficient to be a member of a green party, or member of an NGO that has the preservation of the environment among its goals, even though the personal behavior or ideas of the said individual, applied to a couple billion people, would in no way be compatible with the preservation of a planet in good shape (such contradictions are not rare…).

And what about the dictionnary ? Hachette offers the following definition : “Ecologist : individual wishing the preservation of nature and of biological equilibriums”.

If we work on the basis of this definition, then an ecologist aims at perturbing as little as possible the main natural cycles, or aims at minimizing his(her) individual pressure on the environment as much as possible. Is being a nature lover a good way to achieve that objective ? Not necessarily, as we will see.

Suppose I live in a large urban area, just as 80% of the population does in France (source INSEE). In a city, obviously “nature” is not plentiful. If I am a nature lover living in an urban area, I will therefore move during my leisure time, or even during my work hours, to satisfy my passion and find places not too much packed up with people.

For example, I will go for a walk 20 miles from home on Sundays. Most probably, I will take a car, which will generate nuisances for the environment, just as any car usage does ! If we are numerous enough to go for a walk on Sundays, it generates what follows, which can’t really be considered a “minimized pressure on the environment” : 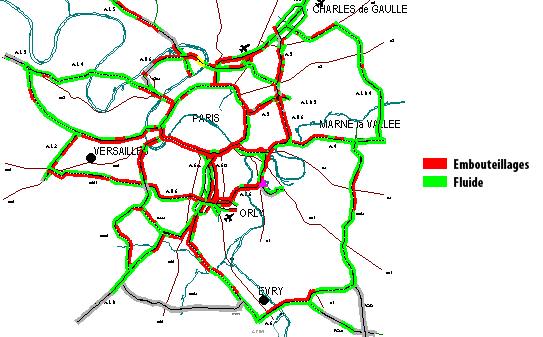 Trafic jams around Paris on a particularly busy day.

Let’s now assume that I am a rich inhabitant of an urban area. I might consider buying a cottage house in a remote place, or having one built. If we are numerous enough to share the same desire, it leads to what follows:

Urbanization evolution of the “Golfe du Morbihan” between 1960 et 1990.

It is pretty easy to acknowledge that such an evolution does not precisely correspond to a “preservation of the biological equilibriums” for the places where it happens !

Let’s now suppose that I want to go places that are still “almost virgin” and be into the wilderness, for example going diving in the Maldives, or visiting a reserve in Kenya. Then I will probably fly. Well, flying is the worst way to travel regarding the environment : mainly beause it leads to very high greenhouse gases emissions per person, and marginally because it requires land use equivalent to that used by train for equivalent flows, and makes a lot of noise.

Thus explorers of remote countries, like trekking in Tibet lovers of Amazon roamers, are paradoxically generating a very significant pressure on the environment through their travel. A poll conducted over a sample of 200 “ecologists” in Germany showed that they flew 1,5 times more than the average German !

And at last one can be a nature lover but destroy, precisely because of one’s passion, the object of one’s desire : in a city the disturbance of the ecosystem in place (a couple pigeons and a horde of cockroaches !) by an additional stroller is not enormous, but an additional human being in a place which is fragile or very little visited might represent a non negligible intrusion. For example :

I could add examples over and over showing that looking for contact with “nature” might be aggressive for it, and in some cases very harmful. What is the lesson of all this ? An ecologist, according to the dictionnary, is someone with a small resource consumption and a small waste production. (S)he is not necessarily a nature lover : a person living in a small flat, buying only what is strictly necessary, never flying, never driving, and eating little meat is much more of an ecologist that a nature lover going from a raid in Alaska to another one in the Sahara.