There is not only oil production that will peak someday, before it declines at a rate that is most discussed: gas will experience exactely the same process, for exactly the same reasons than for oil :

But, to remain in analogies with oil, there is no more “65 years of gas without trouble” than there is “40 years of oil without trouble” ! Depending on the region, the end of a rising gas production will happen between now and in 60 years.

What follows uses the same bases than for oil:

So get to work ! (it will help if you read first the page on the peak for oil production, because the method is the same). 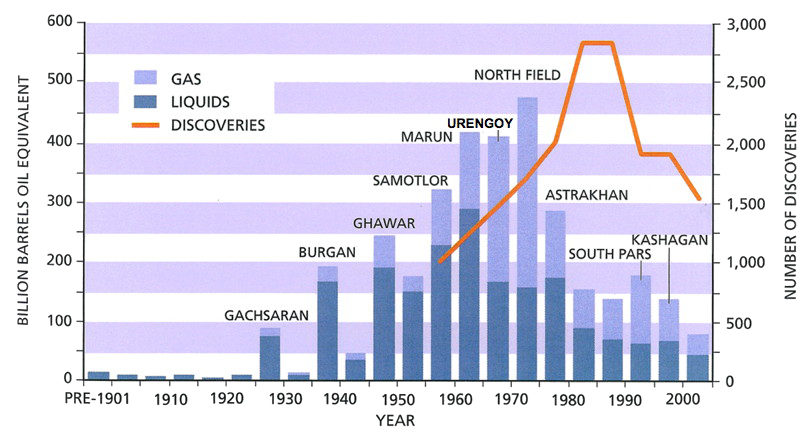 Evolution of the world recoverable oil and gas discoveries (we are talking here of the 2P evaluation, done at the date of discovery), except US and Canada.

As the case may be, the name of the largest field discovered in a 5 year period is mentionned above the bar that corresponds to the same period (for example Burgan and Ghawar are giant oilfields, Urengoy, North Field and South Pars giant gas fields).

The reader will notice two things well known of oil geologists but not as much by the general public:

Then to be able to position the peak more precisely, it is necessary to have an idea of the average delay between discoveries and production.

In other words, 80% of the ultimate reserves remain to be extracted from the ground (provided we don’t care about climate change !).

Then, just as for oil, we shift from discoveries to production, with of course a future which is not totally written.

This graph illustrates how to go from world discoveries of gas (in green then in dotted black) to production (in red then in dotted lines of various colours). The vertical axis is graduated in thousand billion cubic metres per year.

The green curve shows the world discoveries of extractible gas since 1950 (source IHS, just as above). The amount reported corresponds to the 2P value, that is the most probable value for the ultimate reserves at the date of discovery of the field.

The red curve shows the world production of gas since 1950, and we see that it does correspond to a cumulated production which is only a small fraction of the cumulated discoveries. What will happen next ?

As for oil, the second element of debate is the fraction of the resource that will effectively be recovered. Discussions on this “recovery factor” are of course linked to the various opinions on the technical improvements to come, but not as much as it is for oil. In this debate, technicians are traditionally more pessimistic than economists (among other things because economists hate any kind of decline, which is nevertheless something unavoidable when extracting oil or gas from the Earth crust !).

Who thinks what, then ? Let’s start with a French forecast !

The curve reproduces the actual production up to 2008, then profiles depending on hypotheses:

Another view on the same peak

Of course us Frenchies are not the only ones to make bets on the date of the peak of gas production. As for oil they are fundamentally discriminated by the estimates of ultimate reserves and the speed at which these reserves will be extracted. Below is another forecast made in an Australian report (that has also been used for the page on oil production peak and that can be downloaded by clicking here). 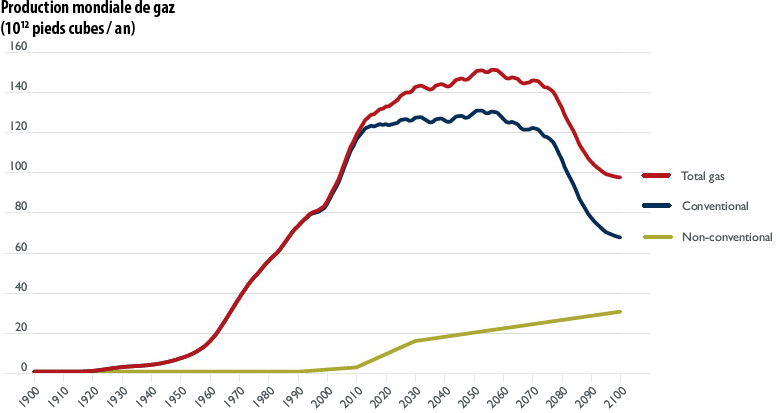 This simulation gives a maximum in the same range than the one above, but the peak is postponed to 2050 (both simulations share a plateau starting in 2010 for conventional gas).

Peak for production… and peak for exports

A major difference between oil and gas is that oil is liquid and gas is gaseous (it took 7 years of graduate studies to be able to come to this statement ! It definitely confirms that it was a good idea to give the taxpayer’s money to the university that trained me). This obvious physical fact will actually lead to a completely different reality regarding international trade. When for oil transportation costs represent 10% to 15% of the production cost (precisely because it is liquid), for gas transporting costs can represent up to ten times the production costs ! (precisely because it is gaseous). This difference prevents gas from being a real world commodity, as only 22% of all gas produced in the world crosses a border between production and consumption, when it is the case for 65% of oil.

As a consequence, gas is more governed by regional markets (the spatial extent of pipes) than a world market (that would require that any gas producer can physically sell to any client in the world, and thus a transportation mostly made with boats, which is not the case for gas when it is for oil). Therefore the gas peak is going to be more a regional fact than a world fact, and it is very consistent with the fact that the price of gas is a regional reality and not a world one.

This does not make forecasts more simple ! For the European Union, that imports 60% of its gas (this percentage falls to 40% if we consider EU 27 and Norway as a single regional unit, which is not totally stupid even though Norway is not part of the European Union). 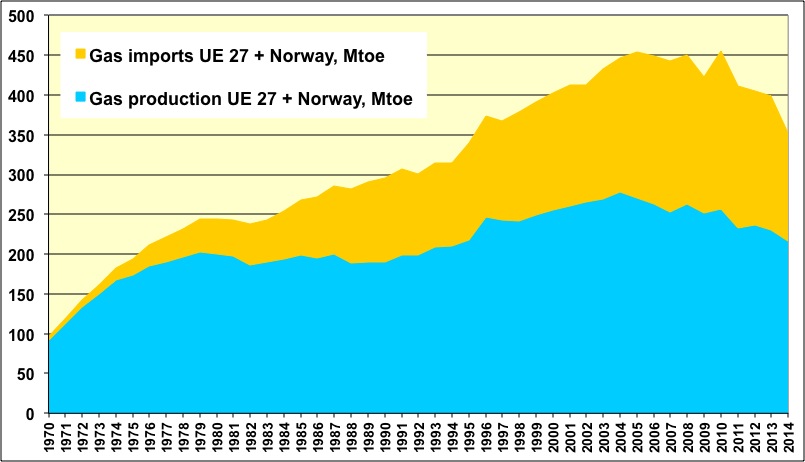 Domestic gas production and imports for geographical Europe (that is European Union + Norway) since 1970.

The North Sea, that presently provides 60% of the European consumption, has passed its peak, and imports will not compensate.

Where do imports – 40% of the European gas – come from ? Half of these imports come from Russia, so looking carefully at this country is crucial to know whether Europeans will be able to go on heating themselves at “reasonnable” prices. In Russia, there is Gazprom… and the rest: Gazprom represents 85% of the production ! Well this production will probably remain flat at best for the coming decades, as the decline of the fields in production will be at best compensated by the development of new projects (including Yamal). And, of course, the consumer has a different opinion on the future !

This graph shows the production of Gazprom from 2000 to 2020, with a breakdown by area, and the consumption desired by the customers of Russian gas producers (vertical bars). CIS designates the countries that used to be part of USSR (Ukraine, Kazakhstan, Azerbaidjan, etc).

The development of gas fields in some of these countries (Kazakhstan, Turkmenistan) will lead to less imports from Russia for these countries (which explains why the red area decreases after 2015).

Meanwhile, consumers would want to go from 640 to… 810 billion cubic meters per year. There won’t be enough for everyone: there will be a “peak of imports” for someone. Who will be the loser if Europe keeps its imports… and what happens if Europe doesn’t keep them ?

As gas is an addition of regional markets, the rise of non conventional gas in the US – and later on in China and Australia – won’t change much the situation for us Europeans, and it is much likely that our peak gas is… now. It’s time to wake up !