Natural gas is frequently presented as the ideal energy for the future. Indeed it does have a certain number of advantages:

But turning the gas into a miracle energy would be a little preposterous:

The above table means the following : when one burns one ton of oil equivalent of heavy fuel oil (which means that the amount of energy obtained from this combustion is 11600 kWh or 42 billion Joules, noted 42 GJ), this frees 890 kg carbon equivalent of CO2 in the atmosphere, that is 37% more than if the same quantity of energy had been obtained through burning natural gas, but 21% less than if this energy had been obtained through burning coal. 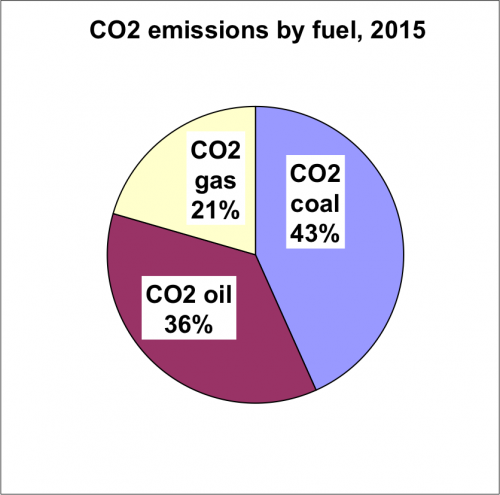 Breakdown of the world CO2 emissions coming from fossil fuels in 2015.

For an energy consumption which is roughly 20% below coal, gas emits 2.5 times less, but it is still not zero !

Therefore an increase of the share of gas in the short term, in order to start a decrease of the emissions while giving us the time to decrease our energy consumption, increase the share of renewables (but they are limited), or that of nuclear energy, is someting that can be supported. But converting everything to gas is not a long term miraculous solution.