It is obvious that energy has a price. But what is the price of energy ? Well it all depends on who pays, and what one pays for…. What follows aims at helping to better discuss bold assertions such as “this is not competitive” or “this is too expensive”… A price is as much the result of the rules of the moment than a constraint that sets the rules !

Let’s take for example the price paid by the end user (that can be an individual or a company) in exchange of a given amount of energy. This price will include altogether :

All elements taken into account, the price per kWh for the end user varies, in France, by a factor 10 depending on the nature of energy consumed. 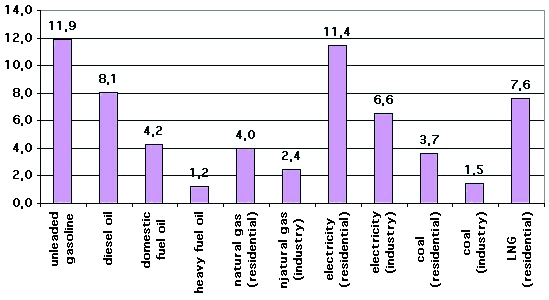 Average price in 1998 (all taxes included) of final energies, in cents (of euros) per kWh, depending the kind of energy.

If we ask anew what is the price of energy, we can now understand that the answer is far from obvious !

In addition it is interesting to note that : 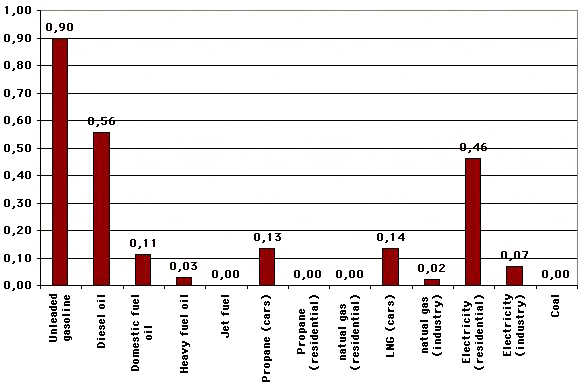 What this diagram means is that when we emit 1 kg carbon equivalent through burning diesel oil, the amount of diesel oil we had to buy led to the payement of 0,56 euros in taxes.

If taxes were imposed just because of greenhouse gases emissions – particularly CO2, and if all energy sources were taxed on an even basis for their “greenhouse gas content”, all bars would have the same height. What this diagram means is then simply that “polluting the climate” does not cost the same amount of taxes depending on the fossil fuel we use. There are even fossil fuels with wich polluting the climate is tax free (residential natural gas, jet fuel, coal). 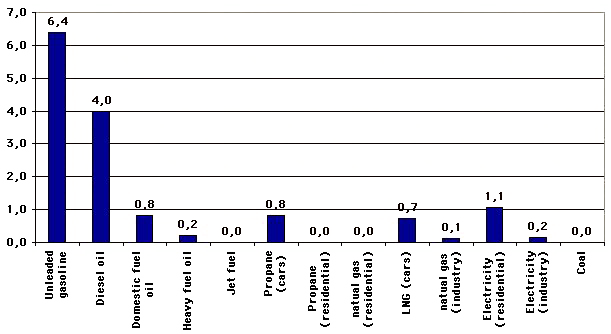 Taxes (excluding VAT) in centimes of Euro per kWh depending on the fuel (reference year 2001). 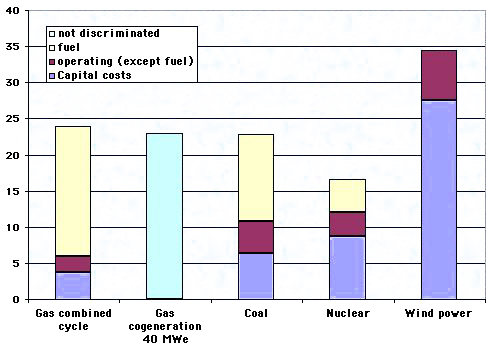 Average production cost per electric kWh in cents of euro depending on the mode.

These costs account only for what happens in the power plant and upstream, but not for distribution (both physical and commercial) costs.

For wind energy, storage and/or alternative production means are not accounted for, which is debatable. Hydroelectricity is not represented, because no data was available.

Just as for fossil fuels, the “price of electricity” is not bound to remain the same for eternity : if the market price of natural gas increases, if a carbon tax is set up, if the average wind weakens or increases, the production costs change and therefore the prices !

It is also interesting to note that the different ways to generate electricity are not equal regarding their “domestic jobs content”. Indeed, investment and operations costs (other than fuel purchase) baiscally correspond to French jobs, when fuel purchases mainly correspond to jobs located in Russia, Algeria, Australia or Saudi Arabia, since it corresponds to the import of raw materials that we do not own in our underground. 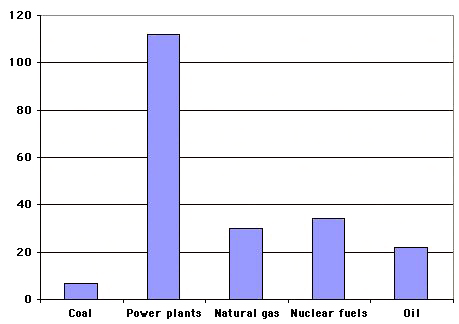 Number of jobs by energy sector in France, in thousands, in 2002.

For nuclear energy, even though we need to import uranium (see below), fuel spendings mean mostly jobs in France, because the price paid by the electricity company corresponds above all to the stages that allow to go from the uranium ore to the device ready to be installed in the reactor; and these stages are performed in France.

For a country as a whole, the “price of energy” can also refer to the amount of the bill for fuel imports. In France, oil ranks first, by far. 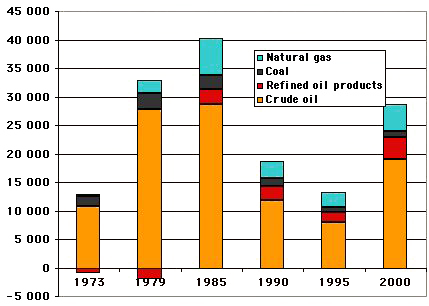 Costs of energy imports for France, for fossil fuels, in million of euros (constant currency), from 1973 to 2000.

But, one might say , maybe we pay a lot more for oil just because we use a lot more than anything else. It is partially true, and it is then interesting to look at the price per energy unit consumled on the national soil. 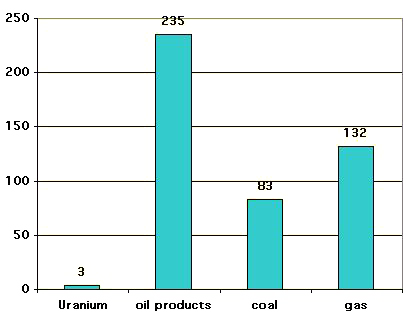 All these prices do not evolve the same way, even though there are correlations. An interesting example is the comparison between the price of crude oil imports and the prices for the end-user.

Evolution of various price indexes in France (the “imported crude price index” is actually the price of oil on world markets) – in constant currency – for various energies since 1973.

The “energy price index” corresponds to a mix of all commercial energies.

Thanks to the high amount of taxes (that do not change), the price for the end-user has only increased by 30% since 1973, while in the same time the purchasing power doubled.

Conclusion : in spite of the apparences, energy – under whatever form – costs less and less as a fraction of the purchasing power (in France). It is our dependancy on energy that has increased ! (in economist talk, elasticity has decreased).