Question of no relevance, some might think : of course it is easy to store energy. It just requires to have a tank full of fuel oil at home, a gasoline tank filled up in a car, a pile of coal in the basement, or a battery : all these effectively allow to have a stock of energy we can draw on whenever we like.

Indeed, what constitutes the interest of “energy”, it’s not only to have some : it’s to have some when we desire it. Sailsboats or windmills, that rely on an energy source (wind) that is not necessarily available when we wish it were, illustrate pretty well this problem. As soon as we cannot store the energy from a given source, the actions that are enabled by this energy source are not necessarily done when we whish to perform them, but just when we can perform them. It most certainly is a determining factor for the whole organization of humane societies.

Presently, 85% of the commercial energy consumed in the world (commercial energy is energy that somebody sells to somebody else, like gasoline you buy, but not like fire wood you pick up in a forest) is constituted of fossil fuels (oil, coal, natural gas) that naturally fulfill the storage function : we can store them and then pick in them at any desired rate, without particular constraints. It is then just a matter of money. 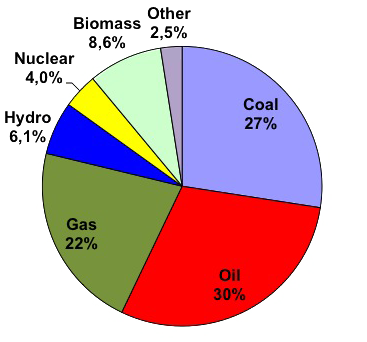 Breakdown by nature of primary energy consumed in the world in 2012.

Electrical energies are converted on the primary energy equivalent

Why shoud we bother about storage, then, since mother nature did it for us, through the “manufacturing” of fuels that are so easy to transport and store ? Because, alas :

Hence if we wish to keep an organization of the world where 80% of the energy we use is available on demand, and not only when the sun shines or the wind blows, we will need a a way to store the energy produced when nature decides it is, to give it back when we have a use for it. That’s were troubles begin, because storing energy is not always a simple business :

All the energy forms described above can be stored, but more or less easily, and with efficiencies that can greatly vary. I have reproduced below the masses that are necessary to store the equivalent of one kg of oil.

A conclusion cannot not be drawn when reading this table : for fossil fuels, the storage function that they naturally fulfill will be very difficult to replace for the same amount of energy consumed when the use of these fuels has decreased (what will happen one day no matter what because the world is finite), except for wood, which remains close in terms of mass and space required. Nuclear power is an intermediate case : uranium is not renewable and would be depleted quite fast with the present technologies, but nuclear energy can become almost renewable with breeders, and otherwise it is very easy to store uranium but much harder to store the electricity produced with the power plants.

Eventually, is one kWh a large or a small amount of energy?

1 kWh, it is therefore a lot when we have to store it, since we need 30 kg of batteries to perform such an operation, but it is not much when it comes to consuming it : in average, and all energies taken into account, a French person consumes about 45.000 kWh per year, that is 5 kWh per hour ! If all the northern european countries are close to this amount, an American is close to twice that amount while the world average is “only” 15.000 kWh per year.

Knowing that a working man represents a power of about 200 Watts, it means that any French has, through his energy consumption, the equivalent of 25 slaves all day round : these slaves of modern times are called car, boiler, washing machine, lifts, automated factories, etc. And this number of 25 does not apply only to the slaves of M. Bill Gates or of M. Silvio Berlusconi (converted into “slave equivalent”, their consumption would be way over !) but well to “Mr(s). anybody” in France.

Nevertheless a large fraction of this energy may seem “invisible” to us, because we are not directely billed kWh, but we consume it through various goods and services that we buy. So, to consume 1 kWh, we “just” have to do one of the following :