No special treatment among fossil fuels: coal will also have a production peak ! The reason is that coal satisfies the same criteria than oil:

As for oil, as soon as we have a function (the annual extraction) for which the cumulative value from begining to end cannot go over a known value, then mathematics impose that this function must start from zero, end at zero, and will go through a maximum – the peak – in between. And as for oil, if the only constraint is geological, the date and the level of the peak depend mostly on the hypothese made on the overall amount of recoverable coal.

But we will face here two additional elements of complexity:

And at last we can also imagine that humanity begins its collapse (that will eventually come, the only question is when !) for a set of reasons in which a limit on the remaining recoverable coal or climate change would have little to do.

What follows has therefore an indicative value, to discuss when such an event could happen, but absolutey not a predictive value.

We will now assume the following hypotheses: 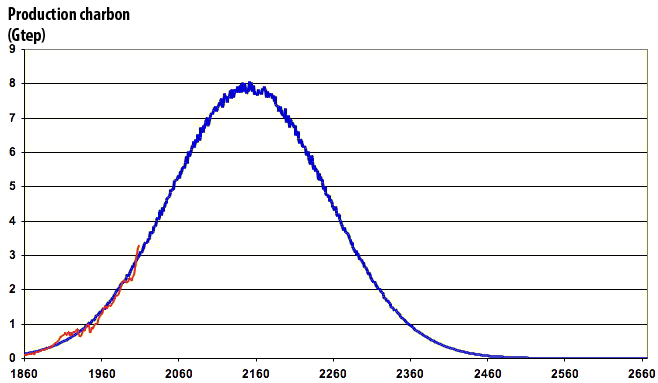 But… we can also produce a plausible simulation with ultimate reserves that would amount to only half of the previous value, that is 1000 billion tonnes oil equivalent. 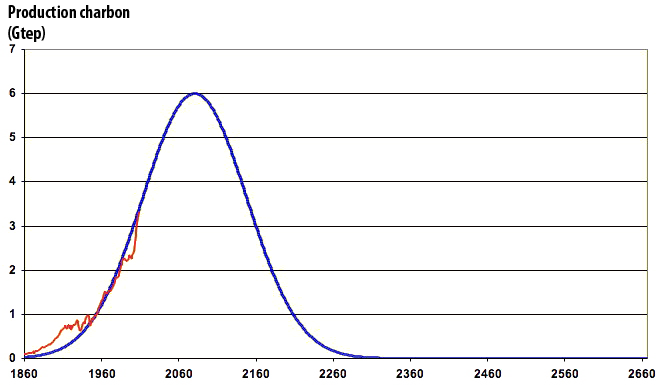 Same as above, for 1000 billion tonnes oil equivalent of ultimate reserves.

What these simulations suggest is that coal production, if we have only geological – thus technical and economical – limits, should peak “somewhere” between the second half of the 21st century and the first half of the next one. Even if this event can seem located in a remote future, this conclusion obviously contradicts a sentence often heard, which is that we have “3 centuries of coal”. Actually such a statement is as wrong as saying that we have “40 years of oil”, for exacty the same reasons.

And actually, some geologists consider that 1000 billion tonnes oil equivalent of recoverable coal is still excessive, and that the ultimate reserves would rather be just a little above the present proven reserves. Their point is that, contrary to what can be observed for oil or gas, some successive estimates on ultimate reserves give figures that rather go down than up. 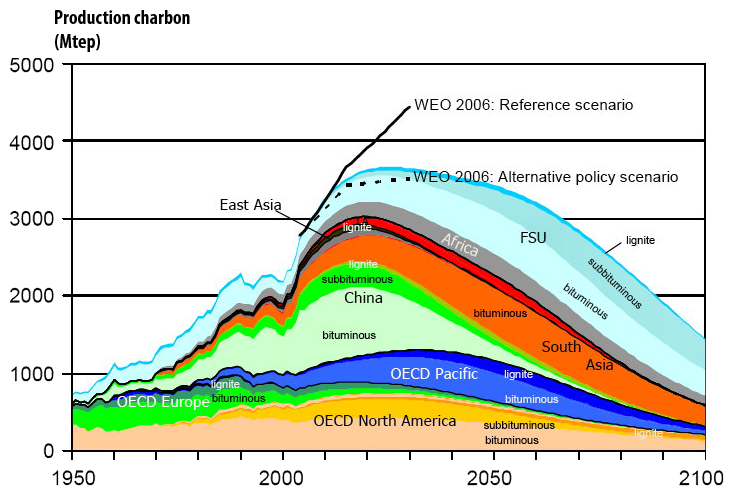 Another simulation of the future coal production, in million tonnes oil equivalent, with ultimate reserves close to the present level of proven reserves.

The peak would then be in 2025 ! And for China it would happen around 2020 ; the Former Soviet Union (FSU) being the only zone able to sustain an important production till the end of the century.

All the elements above confirm (and it’s normal) that the peak is pretty dependant of the amount of ultimate reserves. The debate is open !

As mentionned above, the world peak will hide local realities that will be very inhomogeneous. Coal does not travel well, and 90% of the resources are located in 8 countries only. Besides, coal transport is for the time being very dependant on oil, which will peak much before coal. Therefore when local production decreases, it is not always possible that imports can compensate. Europe, for example, imports coal since it has passed its production peak, but consumption is nevertheless decreasing.

European coal production, in orange, and consumption, in blue. Sources are mentionned on the site tsp-data-portal

But… coal can be turned into liquids, easier to transport ! Definitely, but first half of the initial energy content of the coal is lost in the transformation process, then all the transport infrastructure (pipelines, harbors, boarding equipment) has to be built close to coal basins, which are not oil basins. All this is possible, but it is quicker said that done ! And, last but not least, it leads to important CO2 emissions. But… it is possible to sequestrate CO2 ! Yes, but it costs a little something, and most of all requires one quarter of the initial energy content of the coal….

At the end of the day, we realize that discussing on how coal still present here could be used to fill a gap there is more easily associated to fortune telling than to predictive science. The only conclusion we are reasonably assured of is that we will have a succession of local or regional peaks (Europe has already passed it) and that the last countries to have coal in large quantities will be the US and Russia. For the rest…