That’s a simple question: a coal mine is a big hole in the ground, people that sweat with picks and shovels, little cars to evacuate the coal, and that’s it ! Well, in the middle of the 19th century, it was a reasonnable approximation everywhere, and still is in some places today, but sometimes reality is a little more complex !

To be at the surface or not to be

There are two main categories of coal mines on Earth:

As the best coal (with the highest carbon content) is the oldest, it is generally also the one burried the deepest. Therefore open pit mines are most often for lignite or brown coal, when hard coal is generally mined underground.

Let’s go down (the mine)

Extracting coal is basically digging (into the ground or into the seam) then washing. That one has to dig, everybody will understand. In artisanal mines, that remain widespread in some countries (particularly China), people still work with picks and shovels, but in Occidental countries mechanization is most common. As a result, the productivity of a mine worker can vary from several hundred tonnes per year (roughly 1 tonne per day) to almost 10,000 (roughly 30 tonnes per day).

But why washing ? Because what is removed from the earth is actually a mixture of coal itself and various mineral debris (from dust to big stones) enclosed into the coal. These debris are removed with water under pressure (thus washing), which also leads to the loss of 10% to 50% of the coal brought from underground, depending on the quality and compacity of the coal. The heaps found near mine pits are formed of these mineral debris taken to the surface along with coal. It is only after having been washed that coal can be used or sold.

For hard coal, mining costs vary between 10 and 40 dollars per tonne, depending on the grade and mechanization. Below is a detail with 2001 data.

If we assume a production cost of 25 dollars per tonne, for a steam coal producing 6500 kcal/kgwhen burning (that is 0,65 tonne oil equivalent per tonne), the cost of extracting energy from the ground is similar to what it is for other fossil fuels. But this is not true for transportation ! 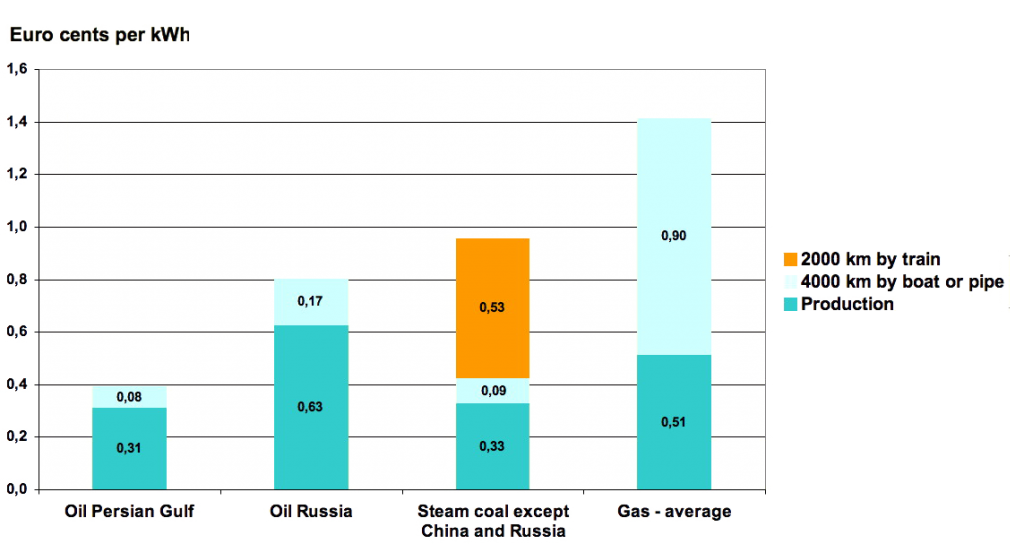 Indicative costs of transportation for various fossil fuels, in cents (of €) per kWh.

The transportation cost for coal can include boarding or disembarkment costs that are not included here. We see that oil is by far the cheapest fuel to transport (and coal pretty cheap to transport by boat but not at all by train).

Lignite mines, as explained above, are open pit mines located near the power plant which is fed with this fuel, that can only be used for this purpose (actually it’s generally done the other way round: the power plant is built near the mine !). 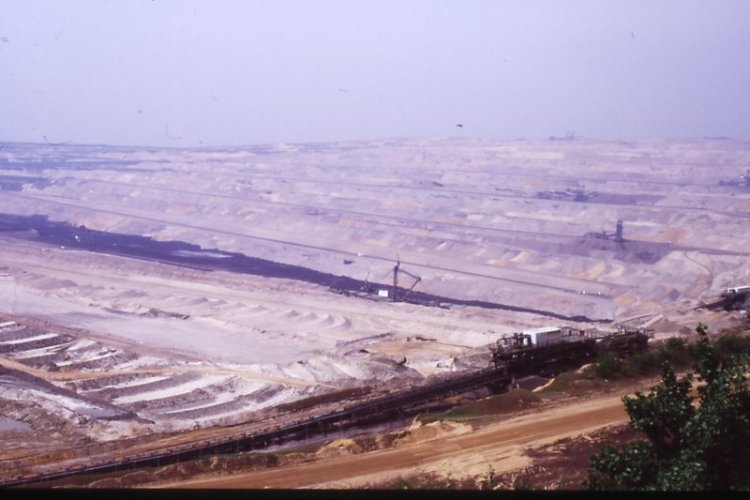 Example of lignite open pit mine.

Lignite is generally younger than hard coal, and thus not burried as deep as hard coal. Mining lignite basically consists in: 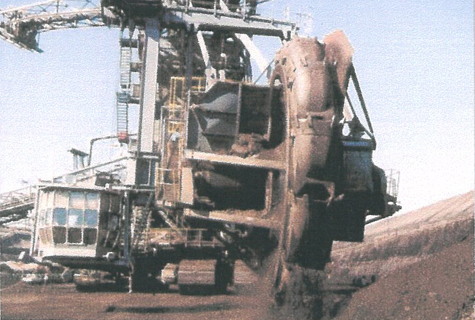 Example of a digging machine to excavate lignite. Such machines can be up to 200 meters long and 80 meters high…

Whenever coal is not used right where it has been extracted, it needs to be transported. Well coal, to our best knowledge, is solid (did you notice also ?). This basic physical fact has a significant consequence: coal cannot be transported with a pipe, which is on the contrary widepsread to transport oil and gas onshore. The theoretical choices that remain are trucks, planes, boats and trains. Of course coal is not expensive enough per tonne to be transported by plane (air cargo is basically used for products with a high price per weight unit, including mail !), and on land train is much more efficient than trucks for massive weights.

As a result coal is transported : 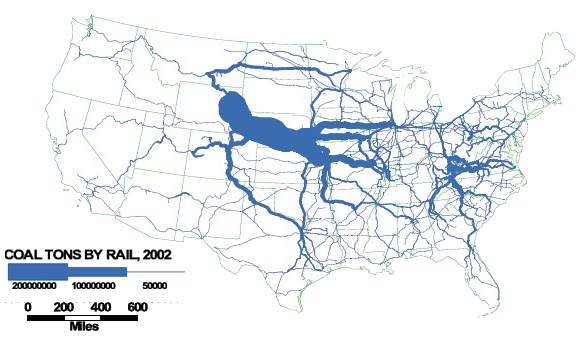 Tons of coal transported by train in the US in 2002.

The major producing zones are Wyoming and the Appalachian Mountains.

A surprising result of the use of train for transporting coal is that in the US coal is responsible for the increasing share of rail in the overall freight: one can wonder whether it is good news for the environment !

When boats are used, the cost of transportation per energy unit are about what they are for oil (and much lower than those for gas); they obviously depend on the distance. 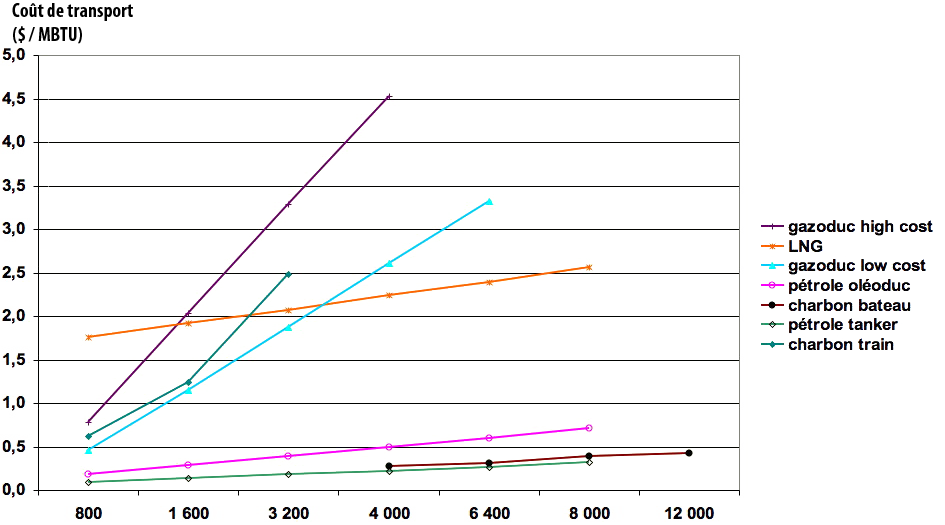 Cost of transportation for various energies, in dollars per million British Thermal Unit, depending on the length of the trip, in km (on the vertical axis, and beware because intervals are not equal). One million BTU ≈ one gigajoule ≈ 290 kWh.

Terrestrial transports increase the operating mining costs by 10% to 50%, and boat transport by 20% to 80%. In average, the CIF cost (CIF = Charged Insurance and Freight ; it is the full cost for a buyer with boarding, insurance and freight included) of imported coal represents 3 times the selling cost when leaving the mine. Most of the cost of imported coal is therefore transportation costs. It is hard to say how will the cost of coal evolve if the price of oil becomes strange !

However, one must remember that most of the coal is not traded on international markets, but is used domestically. 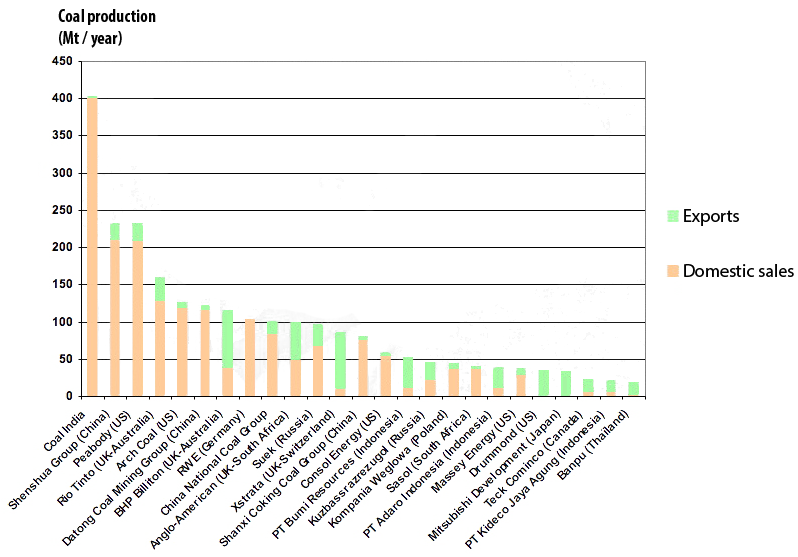 For each producer we have indicated the breakdown between exports and domestic sales. It is clear that most producers sell amost exclusively on their domestic market.

A number of people have thought of accessing coal without mining operations in the true sense of the world. The principle relies on gasification in situ: a pipe goes down to the coal seam, injects air with a low fraction of oxygen and water vapour, allowing the coal to be gasified, and then the gas mixture is brought to the surface with a second well. Then this gas is sent into a gas to liquid plant. But for the time being it’s still a thought: no such installation exists in the world.