If the climate change that we have put in motion should lead to a deterioration of ecosystems, to the vanishing of natural resources (cultivable soils, fish stocks, etc), to a division by three of the agricultural production, to desertifications, to an increase of extreme phenomena, to migrations, to wars, etc, it is obvious that there will be consequences on health, and that the life expectancy would decrease.

So the object here won’t be to speculate on all the possible indirect effects of climate change on health, let alone try to assess a quantification of these effects. Actually the only proper way to establish a link between a cause that has no direct short term effects and a supposed consequence is to do an epidemiologic study.

What is an epidemiologic study ?

An epidemiologic study is a statistical study, conducted on a (very) large number of people, that aims at knowing whether there is a visible effect, on the medium to long run, for a cause that does not have any immediate effects, and if the answer is yes, to quantifiy the long term effect.

Such epidemiologic studies exist for car pollutants, tobacco, alcohol, or more generally for any substance with a supposed long term toxicity. Such studies are the only way that can lead physicians to conclusions when the effect is not certain (tobacco is a typical example : no one is certain to die from smoking) or does not happen in the short term (nobody dies from the smoke of a cigarette the next minute).

They generally deal with a very large number (several thousands at least) people that have been exposed to an agent with potentially harmful consequences, to compare their evolution with that of a reference group, not exposed but otherwise similar in every respect (age, sex, occupation, etc) to the exposed group.

Regarding climate change, such studies would aim at astimating whether a population exposed to this change will be subject to more or different diseases compared to a population not exposed. This raises of course a lot of practical problems, because finding two very numerous groups, with the same composition, the same socioeconomic level, the same life habits, etc, for which the climatic conditions evolve differently is not very easy !

There are therefore some cases for which the correlations are easy to show, but “attributing” casualties to climate change will never be an easy thing, at least for the “diffuse” effects, such as the increase – as long as it remains modest – of the number of cases for such or such disease.

It is therefore easy to understand that for many evolutions observed so far, as we cannot know exactely what would have happened without the beginning climate change, we will be limited to suppositions. Still, this does not prevent to suggest a couple of preliminary conclusions regarding the link between climate change and health : 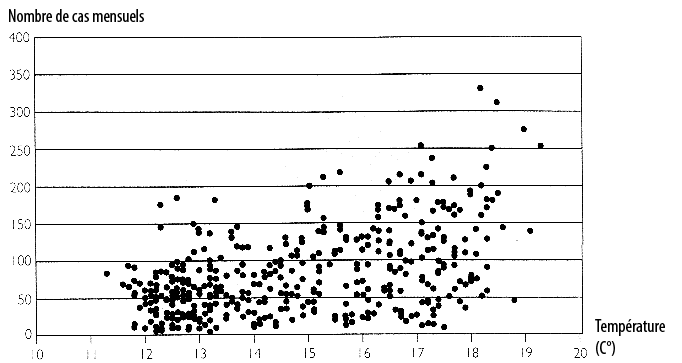 Number of monthly cases of salmonella in New Zealand depending on the average temperature, for the years 1965 – 2000.

The monthly number of cases is clearly correlated to the average temperature. 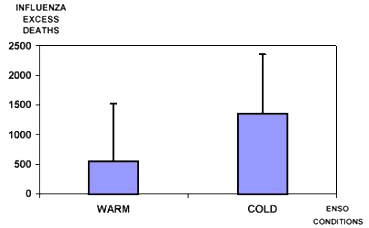 Excess death ressulting from influenza depending on the state of the southern oscillation : El Nino (warm) / La Nina (cold). 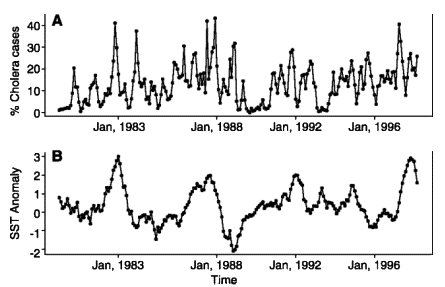 Number of cholera cases depending on the sea surface temperature of the Eastern Tropical Pacific.

One might note a strong correlation between the two ; when the Eastern Tropical Pacific warms up (El Nino conditions) the number of cases might be multiplied by 5 ! 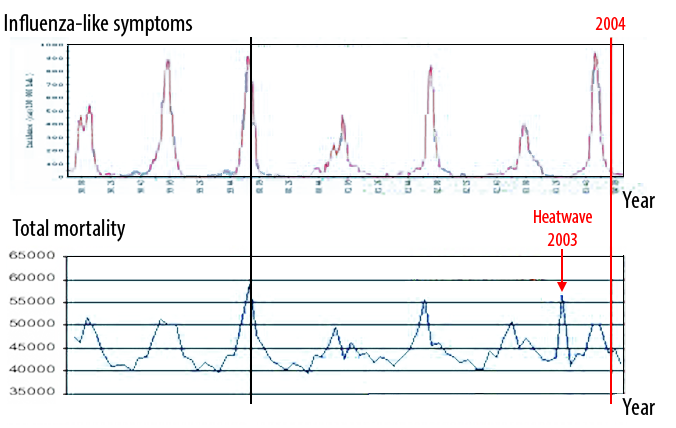 One will note that this figure varies between 40.000 and 60.000, with a well pronounced peak in winter, as a result of the increased prevalence of influenza . The summer peak caused by the august 2003 heat wave (red arrow) is also obvious.

A global warming (that will increase the number and magnitude of heat waves for mid-latitudes) will lead to an increase of the summer maximum and probably to a slight increase of the total mortality. The excess deaths caused by a heat wave are often “compensated” by a deficit of deaths in the following months, so that the annual total doesn’t change that much ; this has been observed, for example, in 2003/2004 in France 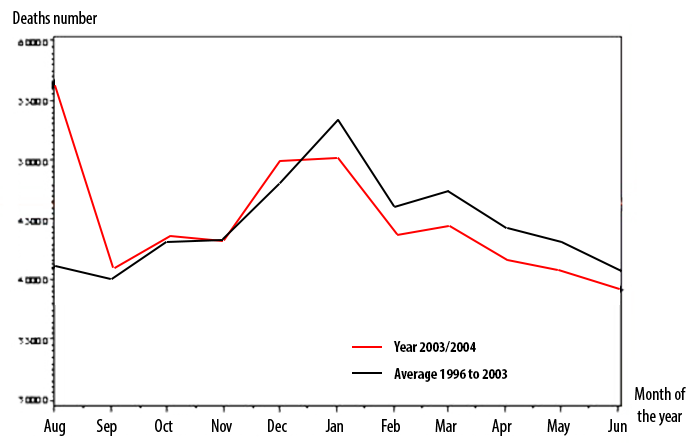 Monthly deaths in France for the year 2003-2004 (black line) and average monthly deaths for the 7 previous years (red line).

The 15.000 excess deaths that happened in august 2003 (compared to average) are followed by a 14.000 deficit from january to june 2004. This supports the idea that the people who died during the summer 2003 heat wave would most probably have died not much later anyway.
The age of the deceased (aged over 75 for most of them) and their sanitary fragility (the deceased persons had an “average medical consumption” double the normal one according to the statistics of the French Health Insurance) also give credit to this supposition.

Epidemic potential of the paludism (represented on the vertical axis, 1 is the maximum) depending on the temperature (horizontal axis, in ° C).

It should be noted, at last, that just as for any “risk” linked to climate change, we must examine at the same time the way the world can change, but also the way our defense capacities might be reinforced, or on the opposite simultaneous evolutions that might weaken our resistence abilities. Among the latter, we should note that growing urban concentration, where it is easier to spread quickly a given disease, or the rapid rise of air transportation, that favours a fast spreading of pathogen agents from one continent to another, probably increase our vulnerability to new microbes that could appear.

On the longer term, the big question mark of our energy supply (as oil, for example) is also of major importance to assess the consequences of climate change on health. Abundant energy provides with the ability to transport food (hence prevent starvation where food does not grow any more), to avoid food decay (through fridges), to obtain high crop outputs (through fertilizers and machines), to prevent some consequences of heat waves (air con) or on the opposite to make them deadlier (car pollution), to run hospitals, and much more. Whether we assume that we will still have abundant energy in a century, or that we will have much less energy per capita than today (or rather much less energetic services per capita), is of crucial importance to get to conclusions on this particular subject.