When the press – or anybody expressing himself on the subject – mentions the global temperature increase that the world might experience in 2100 as a consequence of our greenhouse gas emissions, the bracket now mentionned is1,4 to 5,8 °C, and we are accustomed to thinking that this large gap (5,8 °C, that’s almost 4 times1,4 °C !) results only from the imperfect knowledge that scientists have of the climate system and of its future reaction to our behaviour.

If we can’t say wether the increase will be of “only”1,4 °C or of nearly 6 °C in 2100, it’s because our world remains very mysterious : we would be so ignorant of the way marine currents, ice caps, carbon sinks, etc, will behave, that any forecast could only be very speculative. Some “skeptics” do not miss to to invoke such an argument.

Actually, this intuitive conclusion is only partially true, and therefore also partially false. Two main reasons explain this large gap between the two extremities of the bracket :

That’s why scientists use emission scenarios, that each describe how greenhouse gases emissions could evolve between 2000 and 2100, depending on various hypothesis. Such scenarios are indispensable to compare between them the results of the various climate models, by looking at what are the different results (depending on the models) with the same hypothesis. Indeed, comparing between them the results obtained with different hypothesis would be a little like comparing the price offers for a vacuum cleaner, a computer and a stove : not much can be concluded then…

As there is an infinite number of possibilities to describe future emissions, scenarios are necessarily conventional. It does not mean, though, that they are totally arbitrary : each of them reflects a plausible state of the future world, meaning that it is not possible, today, to state that one of them is incompatible with the information that we have, even if some of them might seem “extreme”.

These emission scenarios are not designed by climatologists, but by other people (demographs, energy speciaalists, sociologists, economists…). These scenarios neither boast to cover the whole bracket of possible futures, nor propose a hierarchy, that is that the authors of the scenarios refuse to say wether some of them are more certain than others.

Of course, some of these scenarios suppose an availability in fossil fuels that some might consider “over-optimistic”, and others are based on a spreading of nuclear energy that may be considered not realistic, and some others still require a surface covered by forests in 2100 that might seem amazing. The purpose here will not be to discuss the realism of each of the scenarios, because no argument allows to definitely settle this point. I have personally examined them all, and if some hypothesis they assume might seem very audacious today, no scenario can be totally ruled out taken into account what we know of the world.

Practically, the IPCC has published a voluminous book describing the 40 scenarios used, that are grouped in 4 main “famillies”. Each “familly”, named by an abreviation (A1, A2, B1, B2), is supposed to reflect a particular evolution of humanity, and the main hypothesis (concerning demography, agricultural practises, technology spreading, etc) are then turned – through simple models – into energy consumption and food production, the latter being then converted into greenhouse gas emissions.

What’s in the box?

Now, for those who are interested in details, and who are patient enough to read them, here are a couple of characteristics for every main familly, and more detailed information on some scenarios within every familly. All the data is from “Emissions Scenarios, IPCC, 2000″.

The A1 family is based on the following hypothesis : 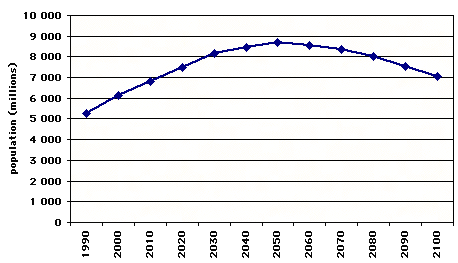 Evolution of the world population in the A1 scenarios

An example of scenario of the A1FI variant : A1C-MESSAGE 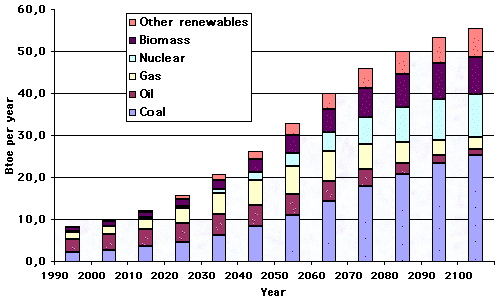 This scenario remains plausible (nobody can state it is totally impossible) but that describes clearly a very sharp increase of the energy consumption and a world coming close to its known limits for fossil fuels (except for coal). With this scenario, the atmospheric CO2 concentration in 2100 comes close to 1100 ppm, that is 3 times today’s value.

Actually the “plausibility” of this scenario is not really impaired by these consumption figures : with coal alone, if price ceases to be a problem, it probably possible to consume 2000 Btoe in a century, and with breeders is also probably possible to have 12.000 nuclear reactors without resource problems. The “plausibility” to this scenario, in my opinion, is essentially questionned by the fact that it assumes that an ever rising climate change will not significantly impair our productive activities and our demography (otherwise emissions will fall as a result of major troubles), what is the major questionnable point in my opinion, but not necessarily good news !
Source : Emissions Scenarios, IPCC, 2000 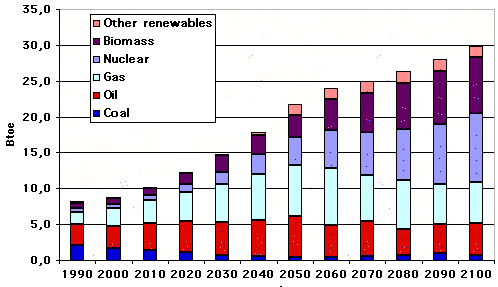 With this scenario, the atmospheric concentration in CO2 in 2100 comes close to 570 ppm, a little above 50% more than today.

If we pursue our “exploration”, the A2 family corresponds to the following hypothesis : 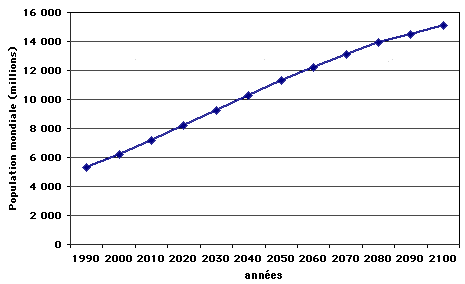 Evolution of the world population in the A2 scenarios.

An example of scenario of the A2 familly : A2-MiniCAM 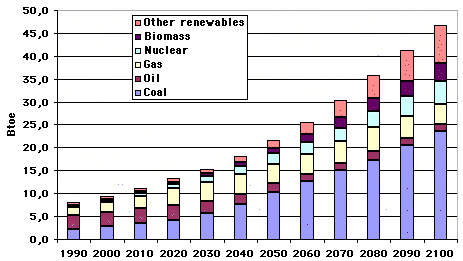 With this scenario, the atmospheric concentration in CO2 in 2100 comes close to 900 ppm, that’s 2,5 times today’s concentration.

The B1 family corresponds to the following hypothesis :

An example of scenario of the B1 familly : B1T-MESSAGE 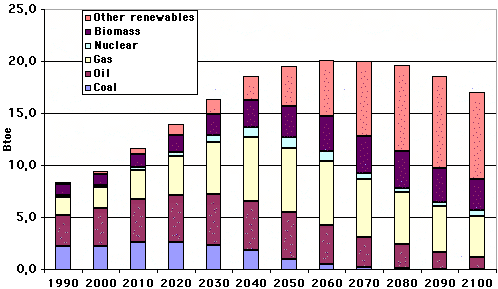 With this scenario, the atmospheric concentration in CO2 in 2100 comes close to 450 ppm, “only” 20% more than today’s concentration.

And at last the B2 familly describes a world where: 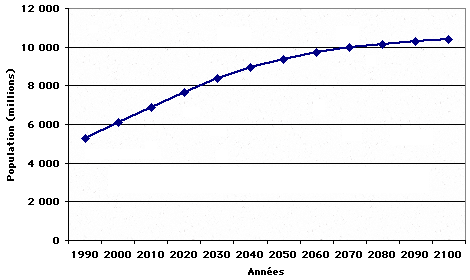 Evolution of the world population in the B2 scenarios
Source : Emissions Scenarios, IPCC, 2000

An example of scenario of the B2 familly : B2-AIM 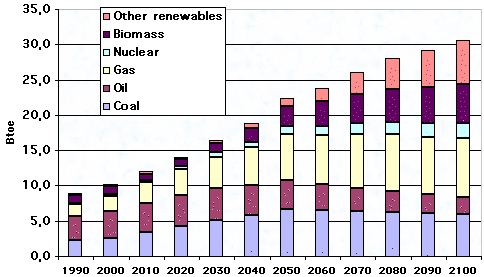 With this “gas intensive” scenario, the atmospheric concentration in CO2 in 2100 comes close to 740 ppm, or twice today’s concentration.

A first conclusion that can be drawn from all this is that none of the scenarios corresponds to a world where halting as quickly as possible human induced climate change is at the forefront of any public policy. It is also essential to note that none of these scenarios envisions a brutal breaking down in the current trends (caused by a nuclear war, a massive outbreak, etc), by nature difficult to predict ! These scenarios represent only various exercices of trend extension, with a couple of elementary parameters adjusted a little lower or a little higher. Some will criticize this way to proceed, but as the future is by nature hypothetical, there is hardly a spare possibility. The most important thing is to know precisely “what’s in the box”, not to discuss wether the box is really among the most probable objects we will face.

A second conclusion is that many of these scenarios imply cumulated consumptions of fossil fuels for the 21st century that are, for some fuels, way above today’s proven reserves. But, on the opposite, there are not that many scenarios for which the cumulated consumption of all fossil fuels goes beyond the ultimate reverves (what is in the ground but that we are not sure to be able to tract one day).

As it cannot be excluded, today, that we might be able to exploit the methane hydrates in the future, or gasify deep coal seams, it is therefore difficult to rule out some scenarios on the sole basis that they are not compatible with today’s proven reserves.

Even though they are in limited numbers, these scenarios lead to very different patterns for the greenhouse gases emissions and concentrations during the coming century, as it can be seen below.

Emissions and concentrations of CO2 for the various reference scenarios (a subset of the 40 scenarios of the 4 famillies), with are used to compare the output of the various climate models. SO2 emissions (SO2 is sulfur dioxyde), which are aerosol precursors (aerosols “cool down” the climate), are also represented. The IS92a scenario is an older scenario that was used for the 1995 IPCC report.

Between the most “optimistic” and the most “pessimistic” of these scenarios, there is :

As part of the atmospheric CO2 that will be found in the air in 2100 has already been emitted during the 20th century, the difference between the extremes regarding the CO2 concentration is not 5 but 2 “only”. .

Let’s now come back to the purpose of the top of the page : for a given emission scenario, the various models do not differ by more than 1 to 2 °C for the predicted temperature increase in 2100. The rest of the 4,5 °C difference between the extremes simply reflects the existence of various scenarios, as we can see on the graph below. 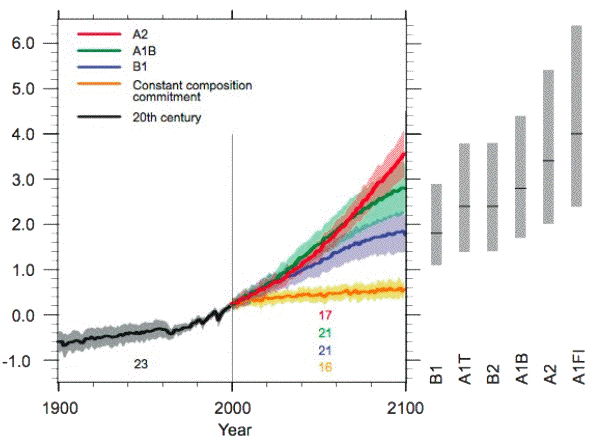 Predictions of the increase of the average near ground air temperature between 1990 et 2100 depending on the scenarios and the climate models.

For a given scenario (represented by an abreviation and attributed a color and a plain or dashed line), the dispersion of the temperature increase predictions depending on the models is shown with a bar on the right hand side, of the color of the scenario.

For example, the A1B scenario, in thick plain red, goes with a temperature increase of 2 to 4°C depending on the models (2 °C between the extremes).

The B2 scenario, in thick plain green, goes with a temperature increase of 1,5 to 2,5°C depending on the models (1 °C between the extremes).

The bar named “all IS92” on the right represents the bracket of temperature increase predictions that were part of the IPCC 1996 report, all scenarios and models together.

The consequence of this fact is that we are still partially the masters of our own destiny. Any reasoning that would consist in thinking “the future being ruined anyway, why make efforts now ?” is therefore flawed : it is still in our hands to “do something” for the long term, even though no result will be instantly visible.

We are in the same situation than a chain smoker : the risk for the future does not disappear the day he(she) quits smoking (as for us the risk of a major climate change does not vanish the day we stop massively emitting), and if he(she) quits Monday but joins again Tuesday, the benefit will be very small (as for us a decrease in the emissions must be long lasting to yield effects).

Only a sustained effort will produce results (just like for a chain smoker), but in the long term the difference might be a major one.

Predicting the future
Published on August 1, 2007