It is common to hear that we should decrease our energy consumption or our greenhouse gases emissions. I won’t say anything else !

The rough figures that are suitable if we do want to become “sustainable” are closer to a division by 2, 3 or 4 that an decrease of 5% of the emissions or of the energy consumption. For the greenhouse gases emissions in the developped countries, for example, the magnitude of the reduction we should meet is a division by 4 to 6 of the CO2 emissions, a figure that we can now find quoted in some official speeches.

That such a large reduction is needed is often the source of a major surprise, then frequently leads to a kind of fatalism : “we will never be able to achive such a reduction, so why bother to do anythong at all ?”. It is clear that if we want to achieve such a result in a couples of months in France, the only options are a massive outbreak that will divide the french population by 10, or an atomic war covering all the country. Any other developped country is facing a situation alike.

But if we accept the idea that this objective should be met in a couple of decades (and nobody is wishing better), it is then necessary, to know what it represents, to convert a global goal in an annual decrease.

Let’s say, for example, that we want to divide the french emissions by 4 in 50 years. By how much should we decrease the emissions every year to achieve this result ? Well, the answer is….2,7% per year (graph below). 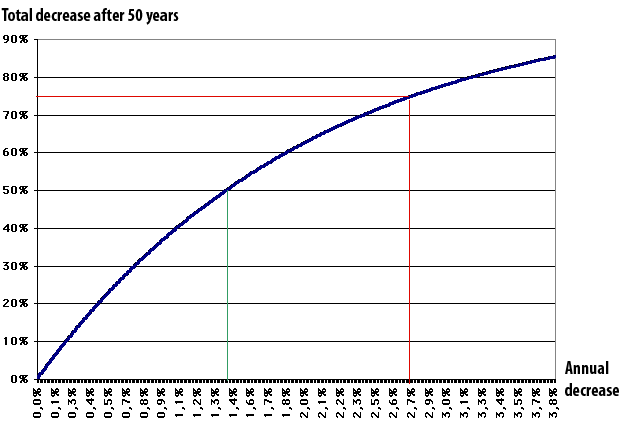 Total reduction obtained after 50 years (vertical axis) while maintaining a given annual reduction during all this period (horizontal axis).

For example, maintaining an annual decrease of 1,38% per year (thin green line) we get a division par 2 after 50 years.

To get the “famous” division by 4 of the greenhouse gases emissions in France in 2050, that is a 75% decrease, we should maintain an annual decrease of 2,7% for 50 years. Impossible ?

Our american friends should achieve a 4% reduction to divide their emissions by 10, which is about what they should do.

Before we get afraid by these figures, we should not forget that for the opposite evolution (the increase of the energy consumption and of the emissions) things also went very fast : our energy consumption per capita in France has tripled from 1960 to 2000 ; a division by 2 would bring us back in the 70’s and a division by 3 would bring us back to 1960. And the only question that matters is this one : in 1960, was the “average French” 3 times unhappier than we are ? Was the “gross national happiness” 3 times inferior ? 1960, it was not the stone age….

But it is clear that reaching such an objective requires to declare it a prioritary one. If, in the same time, we want to cut the greenhouse gases emissions by 2,7% per year, and have an economic growth of 2,5% per year, it means that we must “decarbonate” our economy by 5% per year. It is technically and socially possible, of course, but it clearly should be a very important cornerstone of any public policy in order to be achieved.

This little example illustrates that, converted into an annual diminution, an ambitious goal remains into the bracket of the evolutions that we can manage without necessarily generating a social clash, even if, in the long run, the world after a drastic diminution of the greenhouse gases emissions will no longer resemble to ours, and even if the path to follow supposes to overthrow a large number of things we take for granted today.

Predicting the future
Published on April 1, 2003