What is a greenhouse? Everybody knows that it is a small construction made of glass walls, which leaves solar energy easily go inside – what increases the inner temperature – but prevents the heat formed within the glass walls to dissipate too quickly outwards. Two effects contribute to retain the heat trapped inside:

There are, in our atmosphere, some gases (the “greenhouse gases”), present in (very) small quantities, that act exactly the same way for our planet than windows do for a greenhouse. They do not prevent sunrays from reaching the ground, but, being opaque to the infrared radiation emitted by earth’s surface, they prevent the soil to cool too quickly and lead to an additionnal temperature increase that would not exist if they were not there. But the analogy with the greenhouse does not apply to the “mechanical effect”, as the greenhouse gases do not confine “mechanically” the hot air near the ground.

What is a greenhouse gas?

Fundamentally, a greenhouse gas is a gas which is partially opaque to the infrared radiation emitted by earth’s surface. Most of them are also transparent to incoming solar radiation, but not all of them: ozone, in particular, is opaque to the incoming ultraviolets. More details are available on the second part of the page that describe greenhouse gases in detail.

The greenhouse effect is therefore nothing more than a difference in transparency of the atmosphere depending on the radiation that tries to pass through.

The two main greenhouse gases (but there are many others) are perfectly natural and have been present in our atmosphere for a very long time:

“Trapping” energy close to the ground (or actually preventing it to leave easily the ground) leads to a temperature increase of the surface. It is generally considered that the heating deriving from the greenhouse effect leads to an increase of the average surface temperature of 30 °C (in rough figures), which is enormous. In other words, should our atmosphere be totally transparent to the infrared radiation emitted by the ground, the average temperature on earth would be around -18°C rather than +15 °C, rending our planet all the most inhospitable for the bipeds we are. In the first place, the greenhouse effect is therefore a beneficial effect.

The problem that is sometimes referred to by the term “greenhouse effect” is therefore not the effect in itself, essential to life as we know it, but the fact that we are quickly modifying it, what might generate serious problems. So the proper term for the process we have put in motion should rather be “climate change”, or “global warming”, though, as we will see later, the climate change to come can’t be reduced to just a temperature change, and by far.

A couple of more technical explanations

Our star, the sun, sends us every day a considerable amount of energy:

The whole humanity’s energy consumption for one year represents only 3% of what the Sun delivers to the surface of our planet every day.

This energy coming from the Sun is delivered under the form of electromagnetic radiation.

are radiations that are all of the same nature: they constitute the vast family of electromagnetic radiations. They “only” differ by their wavelength and their energy.

Any object that has a temperature above the absolute zero (that is minus 273,15 degrees Celsius) emits some electromagnetic radiations in order to dissipate part of its thermal energy:

Our sun, which is reasonnably hot (surface temperature of 6.000 °C), sends us a mixture of various rays which is composed for (percentages represent the proportion of the total energy):

Earth, which is not very hot (average temperature: 15 ° C), emits only infrareds (which are not the same than that of the sun).

It happens that a substance can very well be transparent to one type of radiation but opaque to another. Our soft tissues, for example, are pretty transparent for X-rays (which explains why they are used in medical applications) but totally opaque to visible light (otherwise we would never say: move away, so that I can see !).

When the incoming solar radiation arrives at the top of the atmosphere, 30% is directely reflected towards space, by clouds (20%), the various layers of the atmosphere (6%), and the surface of the earth (4%), which includes some places – for example the ice caps – that are particularly highly reflexive.

The remainder of this incoming energy is absorbed by the various components of our planet (continents, oceans, atmosphere), then re-emitted in the form of infrared energy. In effect, just as our skin heats up when we sunbathe, the surface of the earth and the atmosphere heat up when they absorb the incoming solar radiation, and then disipate this energy by emitting infrared radiation, as explained above.

The greenhouse gases, that had let light pass through without being disturbed (almost), have the ability to absorb infrareds. By doing so, they also pick up the associated energy, and therefore also heat up. Just as earth’s surface, they will dissipate this energy by emitting infrareds, part of which goes back to the ground, heating it up a second time after the sun did the first part.

This whole process leads the greenhouse gases, then the lower atmosphere, then the surface, to be hotter than if these infrared could freely pass through the atmosphere.

Of course, the system always reachs an equilibrium, but with a higher surface temperature than if the greenhouse gases where not present.

Energy exchanges in the atmosphere. The figures represent the mean value, over time (for a full year), and over space (for the whole surface of the planet), of each flux shown, in Watts per square meter.

The “global warming” process can be roughly summarized the following way: when the concentration of greenhouse gases increases, the term B (infrared radiation emitted by the surface that directly passes through the atmosphere without being intercepted by the greenhouse gases) decreases. Correlatively the term C increases, then the term D, what increases the amount of energy received by the ground, and therefore its temperature.

More and more technical explanations: back to the electromagnetic radiations ! (for those who wish it only) 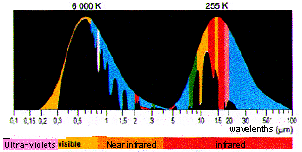 Distribution of the incoming solar radiation (6000 K) and the outcoming terrestrial radiation (255 K) and simplified representation of the absorption of these radiations by the greenhouse gases.

This little diagram comprises two curves, that represent the energy carried by each wavelength for the sun (6000 K, because the surface temperature of the sun is 6000 Kelvin) and for earth (255 K).

Maybe it should be recalled that kelvins equal Celsius degrees plus plus 273,15 (therefore the absolute zero is either 0 kelvin or -273,15 ° Celsius). Going from one unit to another is just a simple shift.

This two curves are normalized, that is to say that their maximum has been put at the same level (otherwise the curve for the sun would be a million times bigger than that for earth !).

The colour below the curves represents, for each wavelength, the proportion of the radiation (of that wavelength) that is absorbed by a greenhouse gas (one colour per gas). There are actually some overlappings (that is radiations that can indifferently be absorbed by several greenhouse gases), but they are not represented on the diagram in order to simplify the presentation (this simplification is not scandalous for a first look at the process).

When looking at this diagram, it is easy to note that: