In the debate that arises about climate change, there are two assertions that are frequently made though they are not true:

Still, there are other ways through which man can exert an influence on the climate system, just as the climate can also vary under natural causes. Is it possible to have a clearer vision?

Does our climate vary naturally?

Actually, not only is the climate system able to change without any men to influence it, but over long periods of time it has never stopped to do so. There are many factors that influence the terrestrial climate system, and if, nowadays, man has become the main factor, there is a long list of evolutions that can lead to a climate change, among which :

Illustration of the flattening of the terrestrial orbit with time.

115.000 years ago, for example (an ice age was coming), the orbit was a little flatter than today.

Be careful: the respective sizes of Earth and the Sun are not at all on the proper scale !

Well it happens that the average energy received during a whole year depends on the flattening of the orbit, it’s M. Kepler that said so !

Then the tilting of the earth’s axis on the orbit – called obliquity (see picture below) – varies with a 40.000 year quasi-period.

Obliquity is the alpha angle at the bottom of the picture.

This angle varies with time, losing or gaining 1° in rough figures over a 40.000 period.

A change in obliquity changes the contrast between seasons : the highest value this angle has, and the more energy a given hemisphere receives during summer, and the less during winter. An important obliquity hence results in hotter summers and colder winters.

And at last Earth does not always show the same hemisphere when it is closer to the Sun, or said otherwise it is not always at the same place on the orbit when the equinoxes happen (though it is not faithfully represented below, the equinoxe is the time when the rotation axis of the Earth is perpendicular to the imaginary line that joins the Sun to the Earth, and at that precise moment the duration of the day is exactely the same than the duration of the night everywhere on the planet).

Illustration of the displacement of the solstice along the terrestrial orbit.

(actually the rotation axis should be “rotating” on the drawing and not be tilted the same way on the right image than on the left one, in order to be always perpendicular to the Earth-Sun line when the equinoxe happens).

Because of this “moving” along the terrestrial orbit of the moments when solstices and equinoxes happen, every 13.000 years there is a change of the hemisphere facing the sun when the Earth is closest to it. Terre This process is known as the “precession of the equinoxes”. It plays an important role, because the two hemispheres (Northern and Southern) are very different: the northern hemisphere has more ground, which reflects better the incoming light than ocean water. This way, depending on the hemisphere that faces the sun when the Earth is closest to the Sun, the average energy absorbed by our planet will greatly vary.

In quantitative terms, it is this last effect that generates the largest changes in the amount of energy that we keep from the sun, and that sets the climatic machine in motion. 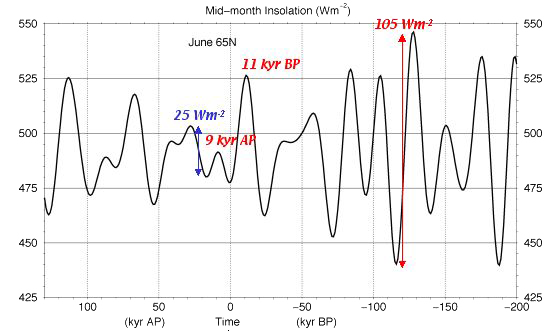 Variation of the average amount of energy that reaches the ground at mid-june and at the latitude of 65 °north, depending on time.

One sees that 100.000 years ago, when the excentricity was higher, the consequence of the precession was far more important than today: this value oscillates strongly with a “quasi-period” of 10.000 years.

Those various “astronomical” variations have been the main cause of the major shifts in the global climate over the last 400,000 years (not bad !), and have generated the glacial and interglacial ages:

The 0 of the right vertical axis corresponds to the present temperature (this curve actually represents deviations from present values). The deviation over the Antarctic is slightly more important than the planetary change.

Beware ! This curve must be read “backwards”: you go back in time when going to the right. The small oscillations on the left part of the curve is the consequence of the fact that measures are more accurate, and resolution higher, when closer to present times. 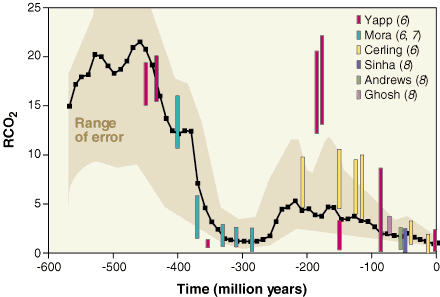 CO2 concentrations since the beginning of the primary era. RCO2 is the ratio between the CO2 concentration just before the industrial times (a little below 300 parts per million, that is 0,03% of the volume of the whole atmosphere) and the past concentrations.

At the time of dinosaurs (-230 to -65 million years, roughly) the atmosphere had much more CO2 than today (2 to 5 times more) and hence the greenhouse effect was much stronger (but then the sun was sending less energy, so that the average temperature was not considerably higher than what it is today). But the diagram says nothing on what happens when the amount of CO2 is multiplied by 2 to 4 in a century, what never happened naturally !

Is increasing the greenhouse effect the only influence of man over climate?

Another question is very frequent in the “climate change affair”: wouldn’t we have other influences on the climate than increasing the greenhouse effect? Actually it turns out that we have many other influences, but presently all the other ones are of secondary importance compared to the increase of the greenhouse effect, if we except the emissions of aerosols (see details on another page):

Is it possible to compare these various effects?

All the causes of climate change described above, be they “natural” or of human origin, do not occur at the same pace (the consequence of continental drift on the climate system, over a century, is not very important!). The scientists that work in the various disciplines have examined, of course, how do these diverse effects compare to each other, and how do they compare to the increase of the greenhouse effect. 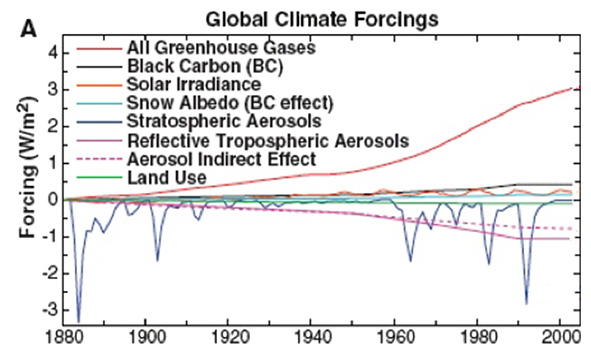 Evolution of the radiative forcing (that is the “global influence on the climate”) over the last century of various factors, natural as well as human induced.

Natural factors, that dominated a century ago, are today marginal considered to human induced factors. It’s clearly a change in the magnitude that will be a source of concern.

So far, the conclusion is pretty clear: the human induced greenhouse effect has become the first cause of climate change for the last decades, and might well continue do be so in the next centuries.