Among the facts that sometimes seem to come in handy to explain that the climate change we have set in motion remains hypothetical are weather events that do not seem to fit to the general trend we should expect :

By reasoning so, and considering that it is not possible that we experience a global warming with such events, we make a very frequent mistake : that of thinking that weather and climate are exactely the same thing, when we are facing two very different ways to consider “what weather there is” .

It is of course possible to go from weather data to climate data : with all the instand values observed throughout the world, it is possible to get average values over several decades and large zones. But the reader will easily understand that the opposite is not true : when we have a given trend on the average values (wich is what we get with climate models), it is not easy – let alone possible, sometimes – to reconstitute the local and instant values of temperature or rainfall. A little exemple derived from everyday life will help us to understand easily that point : suppose that the average mark of a high school class has risen by 2 points over a semester. Are we allowed to deduct, from this single fact, that the result of the little Jones, for a given test, has also risen by 2 points compared to the result of the previous test ? Of course not : it is obviously possible to have the average level of the class rising while while the mark for a given pupil goes the other way round.

For weather and climate, it is exactely the same : it is perfectly possible to have the average value going one way while a givent event goes the opposite direction. If one reminds that any European country covers at most 0,1% of the surface of the planet (and the US 2%), it is then easy to understand that the general warming trend (that is deducted from measurements made over the whole planet and over several decades at least) is not contradicted by a cold winter or a cool summer in France or in Italy or in Florida or in Mogolia.

This is also why, when the question is asked to know whether some unusual event that happened over a restricted zone (restricted compared to the whole planet, of course !) and which is, by definition, a meteorological event, is also the sign of the ongoing climate change, science is not able, for the time being, to give a definite answer : we must wait to see if, “on average”, this kind of event will happen more frequently in the future. In other words, we will get the answer when it is too late to anticipate.

Of course, just as daily weather does, the Earth’s climate also changes, but not at the same rate ! 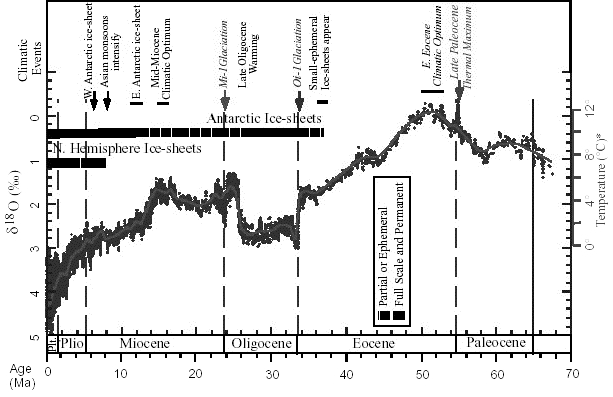 Estimation of the average temperature of the planet (compared to today, the 0 on the right axis being the present temperature) during the last 70 million years.

The horizontal axis gives the time before present, in million years. Be careful ! A graduation represents 2 millions years, and the more one goes right, the more we get back in time.

Let’s recall that the planetary average is today 15 °C, but if we calculate the average over the last million years, we will get something closer to 11 or 12 °C, because Earth has mainly been in ice ages over that time.

Of course, any change that is slow “on average” might include oscillations that happen on a fastest pace, but one should avoid to mix up the long term trend with the short term oscillations. A climate change is not a sure thing as soon as the temperature of a given day – or of a given week ! – in a given place has been far from the mean (sometimes named the “usual value”).

Is it enough to “look up” to understand the climate system ?

And at last, if man has without any doubt become one of the forces driving the climate, through an increase of the greenhouse effect, it has not become yet a force able to change the daily weather according to his will !