Though the press sometimes labels an energy “clean”, this question is not as simple as it may seem. Indeed, to “produce” energy (actually energy can’t be “produced”, but just converted, as physicists know well !) it is not only necessary to have a source of primary energy (this term designates a source that we find “as is” in nature, such as coal, oil, wind, sun rays, a fissile element…), but also to build a device that will transform this primary energy into something useful for us (heat, electricity, movement). Such devices are for exemple a coal fired powerplant, a windmill, a nuclear reactor, etc.

What are the sources of primary energy that we have on our planet ?

Some primary energies are renewable, which means that they get renewed permanently, and others are not (they are then subject to depletion, like oil). All renewable sources are more or less derivates of the existence of the sun (even tides: it is the attraction of the sun that predominates !), except geothermal energy:

Geothermal energy is a consequence of the natural radioactivity of terrestrial rocks (where atomic disintegrations produce heat), and therefore is not induced by the presence of the sun. The annual flux is very low: about the equivalent of the world annual energy consumption (but distributed all over the surface of earth), or 1/10,000th of the energy we receive from the sun. Nevertheless, this flux, being very ancient, has accumulated considerable quantities of heat in the deep layers of the earth’s crust, and this heat stock could be exploited for very long times without a significant depletion (meaning without a significant temperature decrease of the crust as a whole).

Though geothermal energy, if exploited as the low cooling of the earth crust, is not a true renewable, the stock is so huge that it can be considered just “as if”. This way of considering things is also valid for two forms of nuclear energy, that are not renewable but that would draw on such a huge stock that we can consider that it is just “as if”:

<lifusion, if we can ever manage to perfect it one day (not before 50 to 100 years say the experts, so we will have to do without for the coming century).

Among the processes for which the primary energy source does not free any CO2 we will have :

What is the life cycle ?

Albeit the primary energy source does not free any CO2 (or any other greenhouse gas), the construction of the device that exploits it might have freed some:

If we take these “intermediary emissions” into account, we will get all the emissions we have to produce in order to get a given quantity of final energy (final energy is the energy that is available in a form suitable for our needs: refined oil, electricity, gas delivered to our stoven etc). This operation is called a life cycle analysis (LCA in short), and is of current use for any pollutant. We can then see that, opposed to “fossil” fuels that free a lot of CO2 when used, there are energies much less “carbon intensive” (but never totally “clean”) that we designate sometimes, in short, as “CO2 free” energies (chart below). 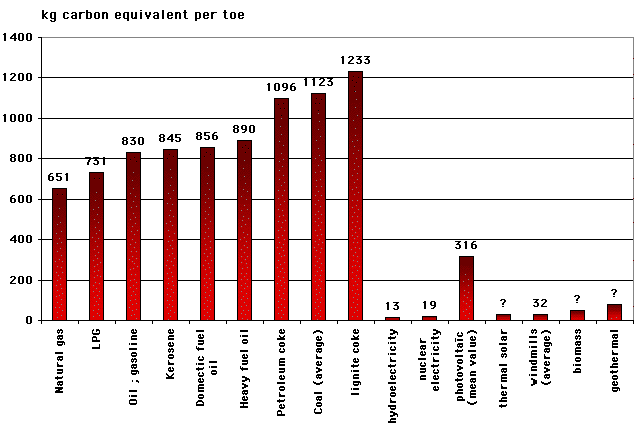 For purely electric forms (hydroelectricity, eolian, nuclear) the indicated values refer to 11.600 kWh of electricity delivered.
The question marks mean that I have a rough idea of the value (corresponding to the height of the bar) but I could not get a precise figure.

For the particular case of electricity, we also have very different values depending on the primary source used.

(*) I copies the chart from the original article, but I should have say “from 400 to 500” : every technology does not emit the same amount of CO2

(**) The CO2 mainly comes from the manufacturing of the solar panel, but also of the battery that stores the electricity at night. Depending on the fact that these panels are manufactured in Denmark (electricity mostly coal produced) or in Switzerland (electricity mostly nuclear and hydro produced), the “CO2 content” of the panel is very different. The paying off is done in 20 to 30 years. But if “CO2 free” energies were used all along the cycle (manufacturing, transport, etc), and with “sober” technologies for the production (like thin layers) we would probably get to much lower values.

(***) same remark as above for the production country.

In short, the energies that free very little or almost no CO2 for all the life cycle are: