The greenhouse effect, it is well known, is the result of the guilty behaviour of industrials, of Americans, of Chinese that should not start to consume oil, but…..not mine for sure !

Alas, we all are, through our everyday actions, direct or indirect emitters of greenhouse gases, either because we directly burn a fossil fuel (oil, coal or gas), what generates CO2 emissions, or because we choose to buy a product, which led to emissions during its production, or because we use a service that requires combustion (for exemple an admission to the swimming pool “includes” the emissions linkeed to the heating of the water). Considering that, as consumers, we do not have the slightest share of responsibility is probably drawing a conclusion a bit quickly !

I would like to suggest below a couple of figures linked to acts that belong to everyday life (or almost). Unless otherwise mentionned, these figures include all greenhouse gases. All these figures have been obtained from the Bilan Carbone (that I could translate as “carbon balance sheet”) that I contributed to set up for the french environment agency, ADEME.

To make these figures meaningful, it might be useful to recall that the average emission of a French is 2,2 tonnes carbon equivalent per year, all greenhouse gases taken into acount, the forestry sink also taken into account. But what will be really useful is to compare these figures with what we can emit in order to stabilize the CO2 concentration in the atmosphere…

To heat a house in the winter, one will emit (essentially in CO2) :

It is important to precise that in winter, when electric heating is used, and therefore when electric consumption rises, coal fired power plants are used more intensively than in summer (in France) to provide extra power, what raises an interesting methodological problem : what should “inherit” the emissions linked to the increase of coal generated electricity ?

If one moves 15,000 km (the average distance covered by french cars is 14.000 km per year), it will lead to the following emissions, depending on the means of transportation used : 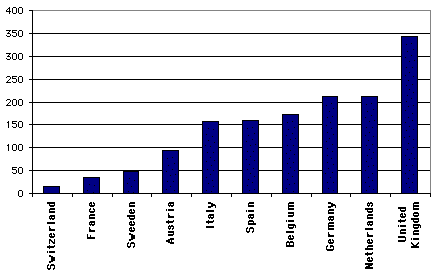 Kg carbon equivalent linked to 15,000 km traveled by train depending on the country.

Let’s recall that alone in a very small car it would be close to 1,000 kg : the train is always better.

I also calculated that an airport like Roissy (Paris) is indirectely at the origin of 5 to 10% of all french emissions.

(NB : all these values are european values. I never had the opportunity to work on other figures) :

Here as for people, anything that travels by plane leads to emissions way over what it is with the other transportation means, but trucks and even trains are not “climate safe” either !

Of course, all these figures correspond to average values, and are susceptible to vary depending on the circumstances. One might find on this website some considerations on the individual acts that allow a savin on the greenhouse gases emissions.

After consulting these figures, I hope that my reader will accept that it seems difficult to imagine that a massive reduction of the emissions might be achieved by the mere action of some courageous and shrewd political leader, that would just have to do “what is necessary” so that emissions fall, without us having to change anything in our consuming habits….