Would it  be too hard to limitate our emissions ? Let’s enhance the ability of the planet to take them back instead ! Forests periodically appear in the frontstage as a way to compensate for the CO2 emissions that result from human activities. As usual, the Devil lies in the magnitudes. Is it possible to have a rough idea of the potential of such mitigation possibilities ?

First of all it is necessary to know that a forest is a carbon sink only when it is young: a mature forest (when it is more than a century old, roughly) includes trees that die as well as trees that grow, and CO2 emissions deriving from the decay of dead trees (more precisely from the respiration of micro-organisms that perform the decay of organic matter) globally equal the CO2 captured by the photosynthesis deriving from the growth of living trees.

There are for exemple a lot of good reasons to preserve the Amazonian Forest in the best posible shape, but not because it would be the “lung of the planet” : in net terms, this forest does not create the slightest liter of oxygen for us !

When it is mature, a forest contains roughly 200 tons of carbon per hectare (a little bit less for temperate forests, a little bit more for tropical forets, much more for boreal forests, but there is not much place left to grow more of the latter). 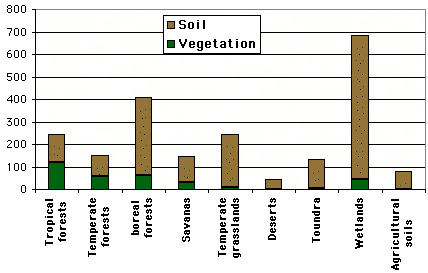 Approximative values of the carbon content (tonnes per hectare) for various vegetation types.

Note that these figures are coherent with those of the european parliament for temperate forests (map below), but I could not determine whether only trunks are included in these values of carbon per hectare, or also small branches and leaves (forest workers like to restrict the figures to the “interesting part” for them, that is only the trunk and large branches). 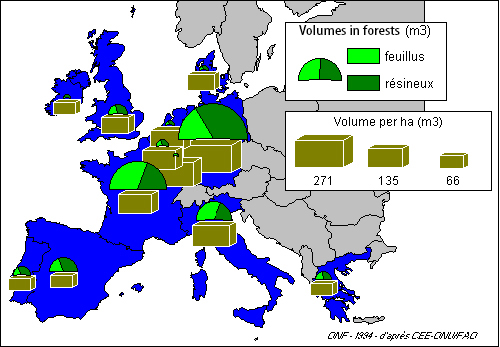 Volumes of live wood per hectare in Europe.

A m3 of wood weights a little below one tonne when it is just cut (since wood generally floats on water). Once dry, this m3 will weight around 600 kg for most temperate species, half of which being carbon. Hence one tonne of dry wood contains roughly 500 kg of carbon, or 300 kg per m3. European forests therefore contain between 25 to 90 tonnes of carbon per hectare for the sole vegetation.

In order for a forest to become mature, it is therefore necessary to wait one century or so. As our forest will contain 150 to 200 tons of carbon per hectare when mature, it is therefore possible to say, in first approximation, that a young forest absorbs between 1,5 and 2 tonnes of carbone per hectare and per year (this is probably a very rough approximation, because it seems very likely that the evolution is not linear, and it supposes that we start from scratch for the carbon content of the place where the forest will grow, but it will be sufficient for my purpose).

Before we go any further, a first conclusion is that planting trees generates a bonus only if these forests replace agricultural soils. If forests replace grasslands in temperate countries, the evolution of the carbon content per hectare is null or even negative, as the carbon content of a grassland (soil and vegetation, most of the carbon being contained……in the soil, cf above) is the same than that of a temperate forest, in rough figures. In the same respect, the new forest should not replace an existing one !

Planting trees therefore cannot be declared a good option without saying what forests replace. As a diminution of the agricultural soils can hardly be considered a probable evolution in a world with a rapidly growing population, we could say that planting trees will never present the slightest interest and stop here.

We can nevertheless prolongate the purpose to go to the very end of the demonstration. Presently, the CO2 emissions that the biosphere doesn’t naturally recycle represent about 3.000.000.000 tonnes of carbone per year.

Supposing an hectare of newly planted forests sequestrates 1.5 tonne of carbon per year, we should therefore plant 1.500.000.000 to 2.000.000.000 hectares of forests, in replacement of agricutural soils, to prevent the CO2 concentration in the atmosphere from increasing, assuming in addition that human induced emissions remain at the 1990 level (bold assumption !).

But our CO2 emissions are not constant: they presently increase, and if we wish to compensate the future ones through planting trees, we should dimensionate the forests we plant now accordingly. Suppose now that we wish to plant trees to compensate for what the CO2 emissions will be in 20 years, without imposing any constraint on these emissions, what is not very different (for the second part of the proposition) from the position of the Bush administration.

How could these emissions evolve ? In western Europe, on the grounds of an economic growth of 2% per year (on average), and in a “business as usual” case scenario, CO2 emissions will increase by 50% in 2020. If we extrapolate this result to the rest of the world (for which the economic growth is generally at least as important, developping countries being more currently between 5 and 10 %), what is coherent with the “intensive scenarios” of the IPCC, it means that in order to compensate for our CO2 emissions in excess, not restricted otherwise, it would be necessary to create new forests, out of agricultural land, on one fourth of all emerged land, what represents…the equivalent of the present forest surface for the whole world, or the equivalent of the arable land for the whole world !

Of course, it can be argued that it is not totally impossible. I am not sure I would apply as project manager for such an enterprise, though…..

And this particular crop would have these other characteristics:

And, at last, in cauda venenum: if we substitute arable land by forests, the albedo will increase. The albedo is the name that is used to designate the reflexive power of a surface: a perfect mirror has an albedo of 100% (it reflects all the incoming light), a perfectly black surface has an albedo equal to zero (it reflects nothing).

Well, it happens that a forest has an albedo of 5 to 15% (that is a forest reflects 5 to 15% only of the incoming light), when arable land reflects 25%. While planting trees one diminishes the reflexive power of the earth surface, what contributes to increasing the temperature. In short, planting trees on cropland has two antagonistic effects :

It happens that the net balance of these two effects depend on the location, but in some places planting trees will lead to an increase of the temperatures ! (below)

This map shows the simulated net regional effect of planting coniferous trees on former croplands, depending on the location. The colour indicates the equivalent to a “net carbon sequestration”, in tonnes per hectare, of this tree planting.

Uncoloured gridpoints correspond to places where no foresting of croplands is assumed.