Among the various actions that are periodically suggested to slow down the rise of greenhouse gases emissions, a “carbon tax” is frequently evoked. What would be the principle of such a tax ? Simply that anything that leads to greenhouse gases emissions would be financially charged in order to dissuade – more or less – its usage, just as it is the case for tobacco or alcohol.

I won’t start now a long discussion on the fact that such a tax would be legitimate or not. I might just note, though, that it seems difficult to obtain whatever voluntary reduction of the emissions as long as there is no strong incentive this way and many incentives to go the opposite direction (advertising, “growth“, etc), and that a tax is a particularly efficient tool to allow virtue to be rewarded (since a virtuous behaviour is less taxed). It seems also important to say that one of the classical arguments against taxes (they induce extra spendings for “modest” households) can be answered the following :

If such a tax was set up, was would be the opportunate level ? There is of course no unique answer to this question. In order to give meaningful figures I have chosen a high level of tax, that is very unlikely today : 1.500 euros (about the same amount in dollars) per tonne of carbon equivalent. In France, this would be equivalent to a doubling of the price of gasoline (now around 1 euro per liter, the price would rise to 2 euros per liter, what would represent 8 dollars per US gallon – the current price in France being 4 dollars per US gallon – and we live happily nevertheless !).

It is therefore a high level, but it is voluntary : amounts commonly evoked (100 to 150 euros per tonne of carbone equivalent, that is 5 to 10 extra euro cents per liter of gasoline) won’t bend the trends in a sufficient way considered what is the ultimate reduction to achieve.

Even if such a level seems high, I don’t know of any serious economic work that would prove that it would hurt human activity on a macro-economic scale (it would definitely hurt the energy consumption, but one should know what one wants !).

On the grounds of such a tax level, here are a couple of examples that might held to make one’s mind clearer. The values indicated are derived from the carbon contents that I had to calculate in the course of various personnal works.

A french consumer would pay his electricity 3 euro cents more than today, but this amount would greatly vary from one country to another. 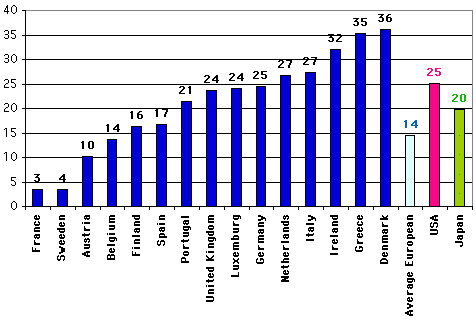 Price increase in euro cents per kWh that consumers would pay on electricity if we assume :

This sole example illustrates pretty well, in my opinion, the very relative significance of the “competitivity” of such or such source of energy (statement often heard for natural gas). It’s easy to be competitive when damages (including the future ones) are accounted for zero in the price system ! It’s easy to see that charging a sum – certainly conventional, but not absurd – for the greenhouse effect inconvenient changes pretty much the hierarchy…

Here are the price increases that a tax of 1,500 euros per tonne carbon equivalent would generate on transportation costs :

How much more, then ?

Even what we heat would be subject to prices increases ! It is actually not very surprising when we know that in developped countries agriculture can generate a significant share of the greenhouse gases emissions (the first share in many countries like France, Ukraine or New Zealand., and I have not investigated all of them !).

Generally speaking in season vegetables and fruits (and eggs) should not undergo major price increases (except when they are processed or heavily packed, see below) poultry and pork should increase a bit (around 1,5 euro per kg), cheese could increase by 4 euros per kg, and beef would increase a lot (twofold or threefold price increase).

Processed foods would undergo price increases between 1 and 10 euros per kg, depending on many things (and that does not concern caviar !).

Fruits and vegetables coming from very far (mangoes, lychees, but also green beans from Kenya) would be 5 euros higher per kg.

At last fish would increase between 0,5 and 3 euros per kg.

I did not do detailed calculations for everything we can find in a store ! (they are of course possible if the adequate data is provided). The figures below a just rough ideas.

All these amounts might seem non reasonable, but one should keep something in mind : if 1.500 euros per tonne carbon equivalent is a high amount for a voluntary tax, it might well be way under reality if the reduction is not the result of a choice, but simply the consequence of an unwished regulation !