If we turn to the past, the answer, without any doubt, is yes. In our modern world based on fossil fuels, it’s been a century now that economic growth and growing greenhouse gases emissions have been strongly coupled. 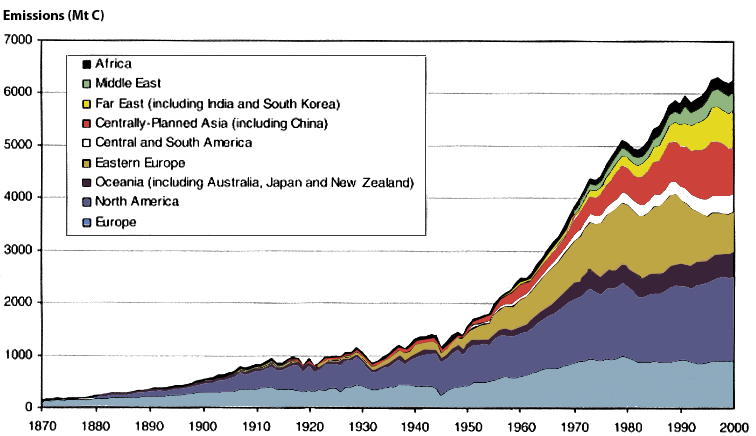 The only spontaneous decrease of the emissions happen in time of economic crises : in the early Thirties (Great Depression, that saw the world economy shrink by 20% roughly), and after the three economic crises that followed 1974 and 1979 (2 oil shocks), and 1990 (first Gulf War).
On the opposite, the uninterrupted and strong economic growth that happened between 1945 and 1975 goes along with a steady growth of the emissions.

If we turn to the future, a simulation done by the French Secretary of State in charge of industry shows that a modest economic growth of 2% per year in Western Europe, in a “business as usual” context, would lead to a 50% increase of the CO2 emissions between 1990 and 2020. 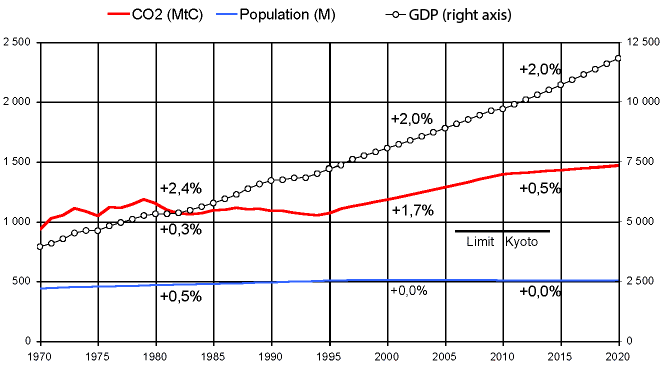 Evolution of CO2 emissions in Western Europe with the hypothesis of a 2% per year economic growth, with no modification of the energy mix

The red curve represents CO2 emissions (in millions tonnes carbon equivalent, left vertical axis) and the short black line (“kyoto limit”, on the right) shows the value below which we should be under the terms of Kyoto (concerning all greenhouse gases, and not only CO2, to be precise) “sometime” between 2008 and 2012 (that is -8% compared to 1990). According to this simulation, the emissions increase by almost 50% between 1995 and 2020.

The outcome of this simulation is actually pretty easy to guess once one knows a certain number of correlations that apply to our productive activities for the time being :

If we prolongate the trends towards the future, “everything remaining equal otherwise”, chances are that economic growth will continue to generate a growth of the energy consumption, and if the breakdown by type of energy, on the world level, remains the same, the greenhouse gases emissions will also increase if the world GDP increases.

The correlation between the primary energy consumption growth and the GDP growth can be seen almost everywhere, for example for the OECD zone between 1970 and 2000, even if it is not a one to one correlation.

Respective evolutions of the GDP, energy consumption, and greenhouse gases (GHG) emissions of the OECD countries from 1970 to 2001 (normalized : there are all set at 100 in 1970).

The transcient decreases of the energy consumption that followed the oil shocks (1973, 1979, and 2000) are clearly visible, and even more the slowdown of the growth of the greenhouse gases emissions, that derived from the construction of nuclear power plants. One will note that at the same time the economy of the OECD zone slowed down but that no major recession happened.

Source : BP Statistical review for the energy, OECD for GDP

As the vast majority of the world energy supply presently comes from fossil fuels, as soon as there is economic growth there is a growth of the greenhouse gases emissions.

Breakdown by source of the world energy consumption in 2002.

Fossil fuels represent more than three quarters of the total.

A first conclusion that can be drawn from what precedes is that if we want to win the battle against climate change, it seems pretty unavoidable to modify the “content of growth”, or to choose to “degrow” for a certain time, at the world level of course.

Isn’t it possible to figure out a “good” growth that might allow to conciliate everything ?

Once it appears that the present “growth” seems hardly compatible with a voluntary solution to the climate change problem, it is of course very tempting to imagine that we will be able to design a “good” growth, that would exist without damaging the environment, because anyone that suggest today to give up growth is easily mistaken for someone that would have had too much vodka (or schnapps or whiskey, I am not specially indebted to Smirnoff). To know whether it is possible or not to find this miracle wedding between economic growth and a preserved environment, we must, unfortunately for those that do not like figures or arid definitions, examine a little closer how this famous economic growth is defined.

Actually, this term refers to the annual increment, expressed in percentage, of the Gross Domestic Product (or GDP), the latter being defined as the economic value (which is the market price most of the time) of the totality of the goods and services produced by resident activities and available for final use (it’s a barbarian definition, you were warned ! But it is preferable to know what we are talking about…).

If we try to explicit every bit of this phrase, here is what it gives :

It happens that this GDP caan also be defined as the total added value of the resident activities ; the added value is the difference between the market price of the goods or services sold and the market price of the purchases that are necessary to produce these goods or services, all taxes included in both cases, but less the subsidies given to the producing entities. It is of course possible to calculate a breakdown of the national total by nature of activity, and the following graph gives the example for France, that probably has a structure very close to what it is for most OECD countries. 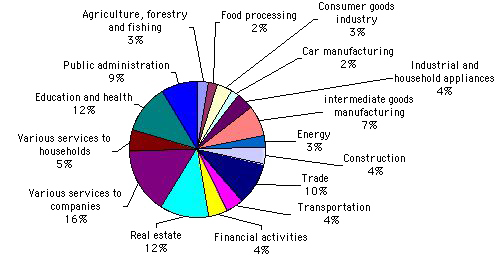 Share of each activity in the french GDP in 2003

Now here is a little question : what is it that we may increase, in the above breakdown, without increasing the pressure on the environment, and the greenhouse gases emissions ? And of course the GDP has to increase “in volume”, which means that it cannot be by increasing the prices for a constant production, otherwise we will face inflation, and not economic growth. The difference between the two is supposed to be simple : if the households spend more to buy “the same things” than before, it is inflation, while if they spend more to buy more goods and services, or “different” goods and services, that did not exist before, it is growth.

The difference between growth and inflation can sometimes be subtle : a new 70 horsepower car, ith the same accessories than before, but that has 7 mph extra of maximum speed (which is totally useless in most countries where there are speed limits everywhere), and that costs 5% more, is it inflation or growth ?

Well, here as always, putting things into the right catgory is not always as simple as it seems. If we get back to our question, which is to know what can “grow” in the national economy without having a concomittent growth of the greenhouse gases emissions (and more generally without generating irreversible environmental nuisances of any kind), the answer is far from being obvious :

What this brief listing shows, it is that the “we just have to decorrelate growth from energy consumption” is not so simple, and anyway the economic gowth is, in many cases, not only possible only with an increase in the fossil fuel consumption, but also requires the increase of the consumption of a whole variety of materials, and obviously it cannot last forever. Of course, the stronger the growth, the shorter the time it will last, and that is not valid only for greenhouse gases.

What can be expected from the “dematerialization” of the economy ?

It is quite frequent to hear, however, that the “dematerialization” of the economy will eventually produce the desired result, that is an economic growth that will not automatically generate a growth of the energy consumption (and thus with a growth of the greenhouse gases emissions), and that we can seriously rely on such an evolution in progress to contribute to the solution to the climate change problem.

Before we discuss any further, there remains to give a definition of what is “demateralization” exactly. It is often considered as a growing share of employment that goes into information management, or into office activities, and other “non industrial” economic activities that presently grow faster than the economy itself. Hence, as office activities are believed to be less energy intensive than industrial activities, energy consumption and greenhouse gases emissions would decrease. Unfortunately, such a belief is being hurt by many facts that do not support it : 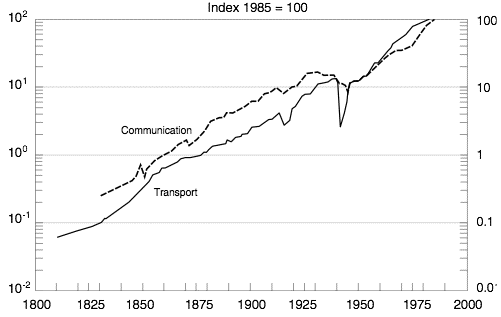 Compared evolutions of information flows and transportation flows since 1800. 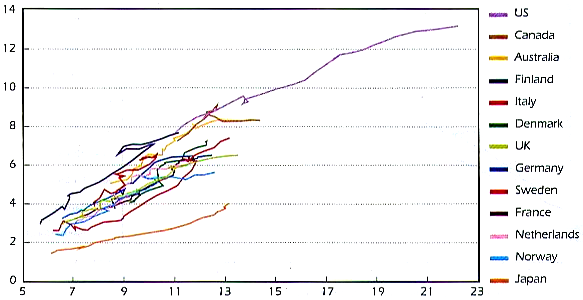 For the 11 IEA countries, evolution, from 1970 to 2000, of the yearly mileage per capita kilométrage annuel en voiture (vertical axis, in thousand vehicles.km per person) versus the purchasing power per individual (horizontal axis, in thousand US $).

The story is clear : the higher purchasing power per individual there is, the more people use cars, or said the other way round, so far, and whatever country is considered, economic growth necessarily means an increased mileage per individual. Well the latter, that belong to the physical world, are bound to decrease someday, as the result of the end of cheap oil, if nothing else. What happens then ?

One will note that still the “slope” of each curve, and its origin, are not exactely the same : between Japan, that has the lowest mileage per unit of purchasing power, and… Denmark, that has the highest (so long for the “environment friendly” reputation of this country !), there is a threefold increase : with the same purchasing power, a Japanese will travel three times less by car than a Dane.

If we try to summarize, we realize that there is no major reason why “dematerialization” should lead to a decrease of the emissions “everything remaining equal otherwise”. It is indeed possible to write the simple equation below (for a step by step building of a similar equation see the page on Kaya’s equation).

This equation means the following :

Well “dematerialization” often designates, for some economists, a decrease of the factor “Energy intensity of economy”. It means that for a same amount of GNP produced, we use less energy. But in the same time we generally try very hard to increase productivity (that is the factor “Production per employee”), and to increase the active population (to avoid unemployment and pay the pensions of the retired people!), so that the overall result is not necessarily a decrease of the emissions (that incidentally do not decrease).

In France, the only occasion when such a decrease happened in a period of economic growth was when a majority of electricity production shifted to nuclear, what led to a very significant decrease of the factor “Greenhouse gas content of the energy” that more than balanced the global evolution of all the other factors.

Is “occidental economy” something that can be spread to the whole world ?

If I stick to what can be read most of the time in the paper, and in spite of what preceeds, that shows that the current evolution won’t “fit in the box” for a very long time, our dominant thinking is that it is desirable to spread to the largest population possible the way Europeans live today. What does it mean ? Basically that we consider as a desirable objective that every inhabitant of the planet be gifted with the following goods :

An European emits 3 tonnes carbon equivalent per year, in average, to access to this material abundance. Applying this emission to the world population would lead to :