One can legitimately ask oneself whether it is not sufficient, to fight against climate change, to simply wait until we run out of fossil fuels, what will automatically lead to the vanishing of the majority of our emissions of greenhouse gases.

I will not develop here the fact that a massive shortage of fossil fuels, in a world that did not anticipate this stage, is probably one of the best ways to trigger a worldwide deflagration. The purpose of this page is to give a couple of figures that will help to answer this question on a “purely climatic” point of view.

If we look at the present proven reserves, we are endowed with :

It therefore seems that we can’t rely on a fast depletion of fossil fuels resources to limitate our CO2 emissions in the near future : ultimate reserves allow a 3% annual growth of the fossil fuel consumption for all the 21st century.

Commonly quoted figures for world ultimate reserves of fossil fuels represent about 4.000 Gtoe (4000 billion tonnes of oil equivalent, noted Gtoe – G stands for Giga, which is the prefix for a million, and toe for “tonne oil equivalent” ; one toe = 11600 kWh = 42 billion Joules), dispatched the following way :

(*) If the consumption remained constant, proven reserves would allow.

It is of common use to present the reserves or resources in years of consumption. Today the world energy consumption is more or less 9 Gtoe per year, and so a lot of people consider that the ultimate reserves (4000 Gtoe) allow more than 4 centuries of fossil fuels in front of us, if we do not bother about the CO2 emissions generated through burning these fuels. To think this way is to forget two elements :

Let’s re-do the calculation while taking into account an annual growth of the consumption. We will also suppose that any fossil fuel can substitute another one (for example after oil is exhausted it’s coal that takes over) without any “losses” (in short we assume that the efficiency of machines remain the same when the fuel changes), which is of course very optimistic. For example, the loss rate to liquefy coal, what would be necessary to substitute oil by coal for vehicules, is close to 50%. It means that the energy “included” into the liquid hydrocarbon obtained from coal represents only 50% of the energy “included” in the coal if it is directly burnt, the remainder being consumed by chemical plants to convert coal into synthetic liquids.

What is the time required to empty all the drawers ? If the world fossil fuel consumption rises by 2% each year, which is close to the present rate, we need : 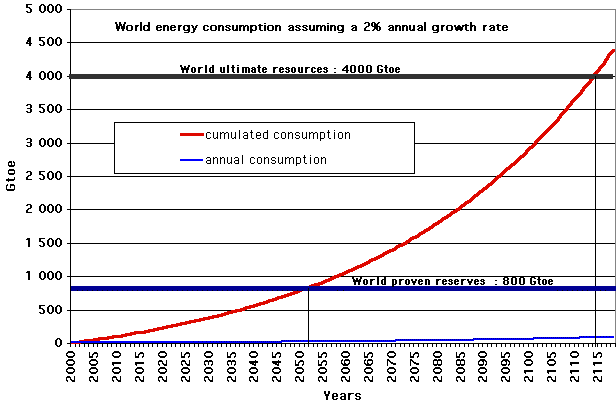 Annual consumption, and cumulated consumption, starting from 2000, with the hypothesis of a 2% annual growth rate of he consumption, in billion tonnes oil equivalent.

As long as adopting the “american way of life” remains the objective for any country in the world, prolongating such a growth rate does not seem an hypothesis more absurd than anything else : theorically, if any inhabitant of the world (if we prolongate the trends there will be around 9 billion poeple on earth during the second half of the 21st century) consumes what an average American uses today (7 to 8 tonnes oil equivalent per year), the world consumption would soar to 63 Gtoe per year, a figure which is reached in 2100 in the above simulation.

Annual consumption, and cumulated consumption, starting from 2000, with the hypothesis of a 3% annual growth rate of he consumption, in billion tonnes oil equivalent.

Furthermore, a quick calculation shows that if we burn 4.000 Gtoe of fossile fuels in a century or so, we will have sent roughly 4.000 Gt (giga tonnes = billion tonnes) of carbon in the atmosphere (under the form of CO2), that, in the same time, will have eliminated a couple of hundred Gt only (today the sinks absorb 3 Gt per year).

If we suppose (beware : I do not have any evidence allowing to consider that this hypothesis is more probable than any other, it is just a plausible case) that sinks can absorb 5 or 6 Gt per year at most, we will be over 2000 ppmv of CO2 in the air in 2100, or twice the concentration reached in the most pessimistic scenario now used by the IPCC.

If we manage to sequestrate half the CO2 emissions (very optimistic hypothesis), we still reach the CO2 concentration of the most pessimistic IPCC scenario.

If, in 2100, sinks have become sources, it is the black box as far as the ultimate CO2 concentration will be.

In short, if we wait for the fossil fuels to deplete to lower our CO2 emissions, first of all we are not guaranteed 4 centuries before the supply problems arise, but rather a couple decades, and then we are at great risk of cumulating the inconvenients of a shortage in the first time, and then the consequences of a major climate change later on (the paroxysm of the change happens long after the decrease of the emissions). We are, in a way, right in the bad situation :

An additional conclusion can be reached : “business as usual” scenarios, prolongating the present trends for more than 50 years, are probably the only ones that can be ruled out as irrealistic !