In 1998, the first source of greenhouse gases in France was, and by far… agriculture (graph below). 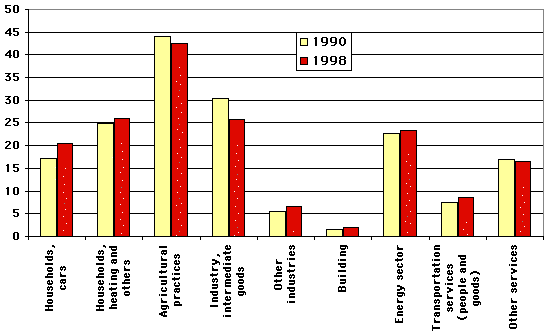 Breakdown by activity of the greenhouse gases emissions in France, in million tonnes carbon equivalent (all the six gases of the Kyoto Protocol)

There are two major reasons to this fact:

Hence if France had the same way to produce electricity than USA or Germany, the ranking of emissions would probably look something like the following graph 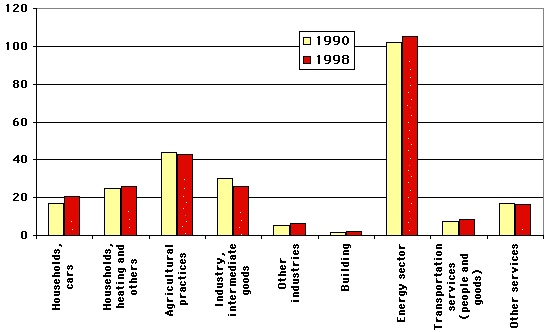 Imaginary breakdown by activity of the greenhouse gases emissions in France, in million tonnes carbon equivalent, IF we produced our electricity the same way than Germany or the USA.

Anyway there are other conclusions that probably remain valid in other countries:

That being said, we can play at looking at what a prolongation in 20 years of the trends observed from 1990 to 1998 gives (caution: a prolongation of trends is NOT a forecast). 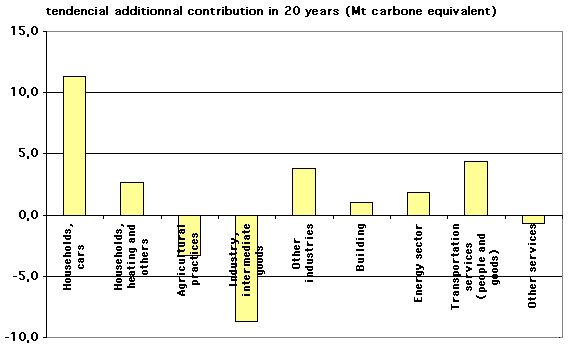 Let’s nevertheless note that a prolongation of trends is more or less legitimate depending on the activity or sector. In particular, the “liberalization” of the electricity sector might well lead to a partial substitution of nuclear energy by gas in power plants, what is not necessarily the best possible idea regarding greenhouse gases emissions, not mentionning the fact that gas is not a renewable energy.

If we leave apart the “electricity sector question mark” for France, the two major increases on the grounds of the prolongation of trends would come from:

It is therefore perfectly justified to pursue “efforts” in the transportation sector, but one should not forget that succeeding in just this field would be far from enough if we want to efficiently mitigate greenhouse gases emissions.