There is no formal scientific answer to this question

Indeed, asserting that there is a precise threshold that we should not trespass for the atmospheric CO2 (for example 550 ppmv) supposes that we can prove that as long as we remain below this threshold we do not run any major risk now or in the future (and, in addition, we must define what distinguishes a major risk from a minor risk), but, as soon as we go over, we will experience a situation in comparison of which judgement day is a pleasant joke.

Well, nothing such can be inferred today from the scientific file, for the following reasons:

But there are still two things that remain possible: the first one is to link the evolution of the emissions to the maximal concentration reached, and the other one is to link certain precise consequences to a rough threshold we should not go over. And of course it is probably easy to accept that the faster and the higher the CO2 concentration increases, the faster and greater the temperature will rise, and the more unpleasant consequences we will endure.

But let’s start by some documented examples of thresholds:

So, even though we don’t have a very good visibility, one can still keep in mind some rough figures concerning the CO2 concentration that should not be passed beyond in order to avoid some events for which a direct relation with the average temperature can be suggested, if not established. It is much harder to link events for which the average temperature – and its distribution over the surface of the planet – is not a direct determining factor : maximal intensity of hurricanes, maximal precipitation level or maximal length of droughts, etc.
After that, how can we link the maximal concentration with the emissions, in order to know how much CO2 we will get in the atmosphere depending on the path that emissions will follow ? This is actually pretty easy because CO2 is chemically inert once in the atmosphere: it is only removed from the air by the “sinks” (oceans and continental biosphere), so we have to deal with a banal “bathtub problem”. This expression, typically french (?), refers to the kind of math problems that we used to have in elementary school, where the question was: suppose we have a bathtub with a tap pouring in water with a rate of so much and a plughole allowing a removal with a rate of so much, how much time will be necessary to fill – or empty – the bath ? Here the bathtub level is the amount of CO2 in the atmosphere, the plughole represents the sinks, and the tap corresponds to our emissions. And, just as for our good old bath, the amount of CO2 in the atmosphere – hence the CO2 concentration – is, on first approximation, a function of the rate of removal by the sinks and of the emissions.

So, if we know the rate of removal by the sinks, the atmospheric CO2 concentration can be deducted from the emission curve (figures below). 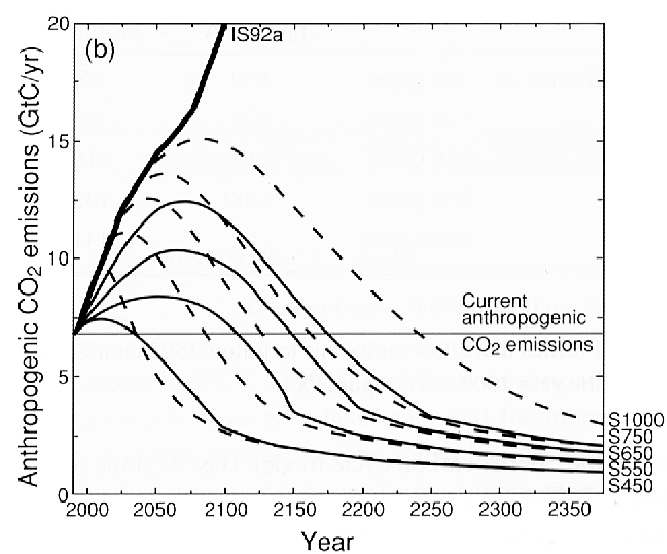 The names of the curves are the ultimate CO2 concentrations that will be reached. For example, S750 means that if the emissions follow the path described by the curve, the concentration will eventually stabilize at 750 ppmv (reminder: one ppmv = one part per million = 0,0001%).

It can be seen that whatever the ultimate concentration reached, stabilization requires that emissions decrease below half the 1990 level “sometime”. 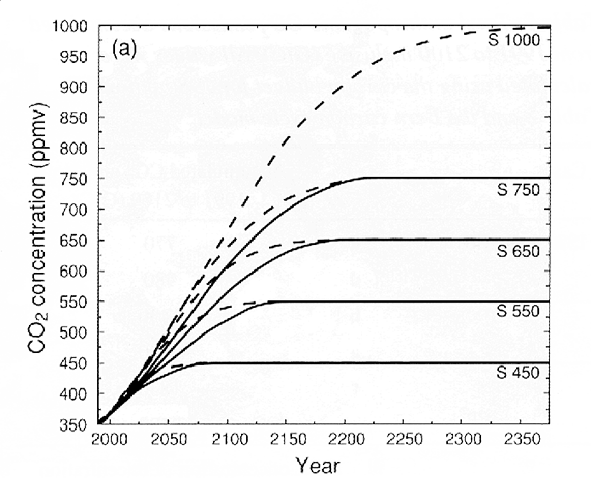 Corresponding evolutions of the CO2 concentration in the atmosphere, in ppmv. Each curve here refers to the curve with the same name on the left figure.

For those who like maths, these curves correspond to the integrals of the curves on the left figure, minus the integral of the absorption by the sinks, which, in first approximation, is a constant function with a value equal to 3 Gt/year (actually the value of the sink depends on the CO2 concentration, but the value remains around a couple Gt carbon equivalent per year, while the emissions could go way over).

The curves above can be read the following way: for a given maximum value of the atmospheric CO2 eventually reached (right figure), various corresponding emissions curves have been calculated (left figure). The link between curves is done with the same abreviations (S450, S550, etc). The origin of the figure is the 1995 situation. The thick black curve on the left (IS92a) refers to a “catastropha scenario” where emissions never decrease during the 21st century;

These curves allow to draw an important – if not essential – conclusion:

The only thing that we can say, when looking at these curves, is that the eventual concentration earth will experience is heavily dependant on the time at which we will engage in the decrease of emissions, and therefore the sooner the (much) better. Hence, if Kyoto is obviously not an ultimate objective, it has the great merit of attempting to put in motion as fast as possible the decrease of the emissions of industrialized countries, without provinding any warranty that global emissions will not increase, that is true.

But preventing a global increase seems pretty unlikely as long as we consider legitimate that “developping” countries should come as close as possible to our way of living, because in a world where 85% of the energy consumed is of fossil origin, the level of material consumption is closely linked to the amount of greenhouse gases we emit.

Decreasing emissions will anyway be a major change

Energy consumption is definitely on a rising trend right now. Does that mean that we can’t do anything to prevent the atmospheric CO2 to increase ? No, of course, because we can turn to “CO2 free” sources, and there are mitigation possibilities for the other greenhouse gases. And anyway, as the world is finite, emissions will eventually decrease “some day”.

But it is certain that nothing wished and planned will happen if decreasing emissions does not become an explicit and prioritary objective.

Without being able to know if we have already lost the game or not, one thing is certain: the more we delay the reduction, and the more ourselves or our descendants are at risk. Emissions scenarios show that our emissions in a couple decades could tremendously vary depending on the choices we will make today.

Of course this poses the problem of who should take the lead and show the way, and how we can implement such an objective. Wouldn’t organizing a referendum at the world level, or at least at the european level, be an interesting thing to do ?